Kerrigan is using Smore newsletters to spread the word online.

Get email updates from Kerrigan:

What is the FSA?

The Farm Security Administration (FSA) was created in 1937 under the Department of Agriculture. The FSA helped with farm loans, subsistence homestead programs, and rural rehabilitation. This was not a relief agency but it relied on networks of cooperation between states and country offices to decide which clients needed loans that could not get credit somewhere else. They loaned money to to tenant farmers at low interest rates and also built model cooperative farmsteads for farmers that were forced to receive relief, or what is now known as welfare. The loan program was the main effort of the agency and many tenant farmers were able to keep their land because of them. Farmers could use the loans to buy land, equipment, seeds, or livestock. The FSA helped families by providing them with training programs, healthcare, and education to all the participating families.

Effects and Impacts of the FSA

The goal of the Farm Security Administration was to help the families become self-sustaining. The most memorable programs of the FSA is the collection of photos that documented the rural conditions. The photos not only helped promote the program but also showed the people, cultures, and landscapes of rural America. The FSA was able to help people earn enough money to buy the land they loaned/rented. Others however chose to remain a renter of the land they farm their whole life.

Madge May and her husband borrowed money from the the FSA in the 1930s. The FSA taught them as well as many other people the basics of modern bookkeeping. From the loan they borrowed they were able to keep their farm and build up the many businesses they started. Madge started selling her chickens she raised while her husband began a feed franchise. Her husband then started a propane gas delivery business. Due to the help of FSA loan and their teaching the May's with book keeping their businesses grew and Madge became the head bookkeeper for a high-end clothing store. 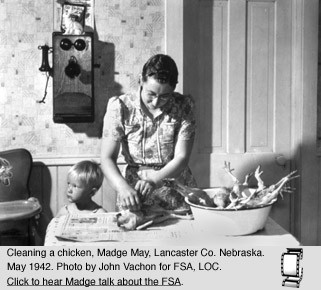 This picture is of Madge May cleaning her chicken she raised and killed to sell to provide money for her family and to pay back the loan.

This picture is of a African American sharecropper and his wife from Mississippi. They have no tools. equipment, stock, or garden. This picture was taken as part of the Farm Security Administration. 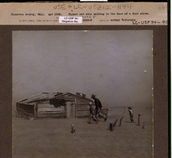 Generally the poor farmers loved the FSA because of their willingness to help them and getting them stable. However the Farm Bureau strongly opposed the FSA as an experiment in collecting agriculture. They believed that it brought farmers together by working on large government-owned farms using modern techniques under the supervision of experts. As many farmers loved the help from FSA some just sank into greater debt. After losing money and/or their job investing in a loan only brought a greater debt to them.

Kerrigan is using Smore newsletters to spread the word online.