Pope Urban II calls on you to reclaim the holy lands.

Pope Urban II calls on you to reclaim the holy lands.

The Crusades: battles between the Christains of Euorpe and the Muslims of the Middle East over the HOLY LAND

The crusades were any of the military expeditions undertaken by the Christians of Europe in the 11th, 12th, and13th centuries for the recovery of the Holy Land from the Muslims. Although at least 8 Crusades occurred, we will only study the first Crusade (the only one where Christians achieve their goal of controlling the Holy Land and Jerusalem) and the Third Crusade, where we will meet Saladin and King Richard the Lionheart.

On November 27, 1095, Pope Urban II makes perhaps the most influential speech of the Middle Ages, giving rise to the Crusades by calling all Christians in Europe to war against Muslims in order to reclaim the Holy Land, with a cry of "Deus vult!" or "God wills it!"

Urban delivered a rousing speech summoning rich and poor alike to stop their in-fighting and embark on a righteous war to help their fellow Christians in the East and take back Jerusalem. Urban denigrated the Muslims, exaggerating stories of their anti-Christian acts, and promised absolution and remission of sins for all who died in the service of Christ.

Urban's war cry caught fire, mobilizing clerics to drum up support throughout Europe for the crusade against the Muslims. All told, between 60,000 and 100,000 people responded to Urban's call to march on Jerusalem. Not all who responded did so out of piety: European nobles were tempted by the prospect of increased land holdings and riches to be gained from the conquest.

To hear his words, watch this edpuzzle. Pope Urban II will explain several reasons to go on Crusade 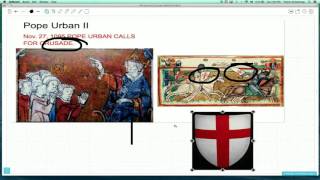 edpuzzle.com
Make any video your lesson

Council of Clermont, in France Where he calls for Crusades

The Routes of the Crusades

Red route is Crusade one. What Crusades went by land? What ones by sea? What ones used both routes?

The Fall of Jerusalem

From the First Crusades. What in this image does the author say the Kings of Europe are fighting for? How can you tell?

The following films will give you an over-view of the Crusades.

The Third Crusade: Saladin & Richard the Lionheart Documentary
The Crusades ("Eyes Without a Face" by Billy Idol)
Horrible Histories The Crusades Report YouTube
Embed code is for website/blog and not email. To embed your newsletter in a Mass Notification System, click HERE to see how or reach out to support@smore.com
close