griffin is using Smore newsletters to spread the word online.

Get email updates from griffin:

Polycystic kidney disease is a disorder that affects the kidneys and other organs. Clusters of fluid-filled sacs, called cysts, develop in the kidneys and interfere with their ability to filter waste products from the blood. The growth of cysts causes the kidneys to become enlarged and can lead to kidney failure. Cysts may also develop in other organs, particularly the liver.

How common is it

Where is it found

The goal of treatment is to control symptoms and prevent complications. High blood pressure may be hard to control, but controlling it is the most important part of treatment.

Any urinary tract infection should be treated quickly with antibiotics.

Cysts that are painful, infected, bleeding, or causing a blockage may need to be drained. There are usually too many cysts to make it practical to remove each cyst.

Surgery to remove one or both kidneys may be needed. Treatments for end-stage kidney disease may include dialysis or a kidney transplant. 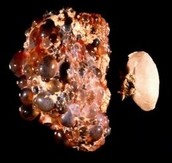 griffin is using Smore newsletters to spread the word online.