Stuti is using Smore newsletters to spread the word online.

Get email updates from Stuti:

1.) "that is the secret of happiness and virtue-liking what you've got to do. All conditioning aims at that: making people like their inescapable social destiny"(13).

This quote is by the Director on his secret to being happy and virtuous which, he says is to like what you are being conditioned to do. The citizens of World State are subject to an "inescapable social destiny" so he says that they might as well enjoy it. I thought this kind of contradicted with the whole philosophy of World State in which people are conditioned to not feel anything at all. Doesn't this include happiness and enjoyment?But then again the whole book is a contradiction itself, it's a novel about a supposed "utopian" society in which all the citizens are equal and they all work together for the betterment of their communities. However, if you peer a little closer you see that it's not always what meets the eye. Citizens are conditioned into happiness, and they can't escape it, they have no choice. In the director's opinion,a forced mindset is a way to happiness cause if citizens are forced to not know sadness, then they must be happy, right? This shows how little of a grip the citizens have on their lives in World State-caused by a combination of Soma & conditioning. Their minds, their happiness does not belong to them, but instead the Director who is able to dictate the secret of happiness.

2.) How is the world we live in today dystopian?

The modern world that we live in could be characterized as a dystopia due to decline of religion, test-tube babies, mega factories, and the lack of privacy. Today, there is a noticeable decline of religion and although it is not the same as the complete lack of religion in Brave New World it is definitely not the same as it once was a few years ago when almost everyone made sure to take time from their schedule to go visit their church, mosque, temple, or any other religious place. These institutions binded together communities it was the way people connected with on another go-to. Someone would ask “Oh, How do you know Tom?” and you’d go, “Oh he goes to my church, we have service together.” Today, religion is still widely practiced but it's starting to slowly decrease. In general around the world, church attendance has hit a new low, and is almost non-existent in some countries. China doesn’t recognize religion nationally leading to a country of a billion atheists. The steady increase of godless citizens, many say will result in the decay of society and morals. Another reason why the modern world could be considered a dystopia is in-vitro fertilization. Many people consider conceiving a child through this out-of-the box method slope a big step toward complete dehumanization. Some are worried that with all the new developments in science and technology, we were playing God by messing with nature. Factory work is another reason why our world could be considered dystopian. Before the 19th century, most people worked on farms and the idea that humans could be automated to work similar to machines on assembly lines would have seemed inhuman, almost robotic. In some megafactories in China workers are overworked, underpaid, and there is no transparency as most workers don’t even know what they're producing, they just do so because that is the only skill they are taught (much like the citizens of World State who are being conditioned. Lastly, the complete lack privacy today also red-flags a dystopia. In today’s world, the FBI can search email, telephone, and financial records without a court order. Law enforcement agencies can take a look at business records, including library and financial reports. Even our internet activities are tracked by third parties, and security cameras track our every movement. It’s like everywhere you turn, the government is breathing down your shoulder (just like how the Director and his colleagues kept tabs on World State citizens.)

The song"Mad World" covered by Gary Jules ingeneral is about what happens to people living in a communist society(similar to what the "utopia" in Brave New World turns out to be.) While it was written in 1984, originally by the 80's band Tears For Fears, renown for their criticism of Communism, the lyrics fit to anything which tries to indoctrinate people into following a specific scheme or routine in order to become "perfect" citizens.

1.) All around me are familiar faces

Worn out places, worn out faces

Bright and early for the daily races

This stanza symbolizes daily life where nothing happens or ever changes. Same people, same places, everyone working to play their part in society but still not feeling satisfied with their current living situation. Similarly, this to me represented the monotonous life of World State citizens in Brave New World where everything the same because people are conditioned. They don’t go anywhere because there is no such thing as “progress.” The citizens don’t have any emotions to feel “unsatisfied” because they are conditioned to not feel at all.

2.) Their tears are filing up their glasses

Hide my head I wanna drown my sorrow

This stanza tells how everyone really longs for a change but are living in an equilibrium-sort of state and therefore can't. Because of that they must hide their feelings so they fit into society, making it a very bleak world without happiness or anything to long for, therefore there is no tomorrow. The tomorrow that people want doesn't exist. I think that in Brave New World the little bit of human, the little atom that is still might be inside World State citizens wants change.

When people run in circles it's a very, very

In the chorus we get to know how ironic the society is in which he lives in. It is supposed to be a "perfect society", a "utopia" where optimal happiness is supposed to be expressed but no such happiness truly exists. In the second line we get to know that the main character strongly wants an escape and where death seems to be the only option left.

4.) Went to school I was very nervous

This stanza to me symbolizes how John is finally introduced to society and left out from the safeties of home at the reservation. As a child(or as a savage) he feels no one knows him because he is evidently different from everyone else, because of his retained individuality, still being able feel happiness but as time goes by, he feels more and more confused and oppressed and asks the only authority figure what to do, begging for someone to take notice of him, but in avail, as the little individuality John has left is slowly disappearing as the novel progresses. 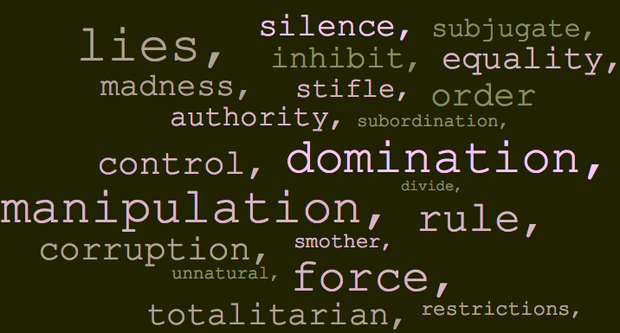 John, the protagonist of Brave New World, better known as “Savage” is at a crossroads between the New World and the life he’s always known at the Indian reservation. John uses Shakespeare’s poetry to express his feelings. Unlike the citizens of World State, John grew up understanding passion and emotions, therefore for him sex is not just a physical thing but an act of love which he hopes to share with only one person. When he meets Lenina he struggles between wanting to touch her and the morals of the World State which don’t allow emotion. Besides John, only the leaders of the New World have access to Shakespeare. For them, his works represent everything they wish to repress and stand in complete contrast to World State’s emotionally impassive society. People’s lives in the New World are predestined by birth and the conditioning during childhood leads to apathy and zero appreciation for arts and beauty. John has heard of the magnificence of the highly modern New World from his mother. He is at first entranced by the “modern” life and as an adult, when he is brought to the "civilized" World State, John is excited about visiting a "new world." In the The Tempest, the protagonist Miranda has lived on an island her entire life (similarly to John) and therefore has never seen a man in a romantic way. So when a ship full of men arrives and she finally sees men she exclaims, “How many goodly creatures are there here! How beauteous mankind is! O, brave new world, that has such people in’t!” John quotes her when he first enters World State and sees Lenina (first female besides his mother he’s really had an interaction with). However, at the time, little does John know the ugly truth behind the “beauteous mankind” and “goodly creatures” of World State.

In regards to the universal GMO controversy, I’d consider myself to agree with their use.There benefits of GMOS including better overall quality and taste, plants that are more resistant to disease, and more nutrition benefits to help feed the malnourished population, outweigh the cons of environmental damage and growth in allergic reactions (Kantor, “Pros and Cons of GMOs”).Through the modification of foods, the flavors can be enhanced. Tomatoes become richer and apples more crisp. Plants that have been genetically modified can become more resistant to disease and therefore last longer which saves struggling farmers thousands of dollars since they throw out less crop due to them being spoiled.(Kantor, “Pros and Cons of GMOs”).GMO foods can have vitamins and minerals added to them through genetic modifications to provide greater nutritional benefits to consumers. This is especially common in developing countries that don’t always have the access to necessary vitamins & minerals. GMOs have to potential to save people who are suffering from malnourishment. With an increasing global population, massive 3rd world hunger, and an estimation that a child dies for every two seconds from starvation there is a great promise in the use of GMOs to benefit not only the farmers, but also societies worldwide. However, I am against GMPs, as in choosing the genes for your baby. I believe that in-vitro fertilization is fine but when it gets the point where you are choosing from the eye color and hair texture to removing the deaf gene and getting rid of the extra chromosome that causes down syndrome then you are overstepping boundaries. I think that doing this dehumanizes people, it eliminates communities & populations of special-ed or hearing impaired citizens. It reminds me of Wii Sports where you can create your own avatar, it isn’t real.

The Hunger Games is a trilogy that follows Katniss Everdeen, another dystopian character on her journey through the tradition of the Hunger Games. The Lottery, but magnifies the stratifying, destructive, and oppressive powers in this society because it emphasizes how the elite of The Capital can play the citizens like puppets similar to how the Director can condition World State’s citizens. Meanwhile people in multiple districts are poverty stricken surviving only on the meager rations, The Capital lives in luxury and most of all they enjoy watching young people tear one another apart for victory. These people call it a sport, but in reality it is nothing more than a carnal desire for bloodlust and violence. Katniss is from the poorest district in this society, District 12. She rises as a dystopian hero when she rebels against the very institution that regulates every movement in the districts by going hunting outside the fences for her family’s meal and completely twisting the Game’s traditions by making there be two victors.

Dvorksy, George. "Why Modern Society Would Appear Completely Dystopian to a Visitor from the past." N.p., n.d. Web. 5 Mar. 2014.

Stuti is using Smore newsletters to spread the word online.