Nash is using Smore newsletters to spread the word online.

Get email updates from Nash:

See Space in a New Prospective

See Space in a New Prospective

Overview of the Hubble Telescope

The Hubble Telescope has made more than 1.2 million observations in it's lifetime. It has been on the same misson from day one in 1990 April 24th. At launch it weighed 24,000 pounds but now weighs 27,000 from the finale service mission in 2009. 27,000 is about the weight of two fully grown African Elephants 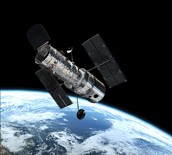 The telescope was launched into space in 1990 and is still up there looking into deep space and also it had a finale sevice mission in 2009 when they had to fix a couple problems and with those problems the extra 3,000 pounds was added so the weight went from 24,000 to 27,000

Purpose of The Telescope

The purpose of the telescope is to see into deep space and to see if stars exploded or to find new galaxy's. If we didn't have this enournoms telescope then we may not even know about half the things in space. The telescope has had 5 servicing misssions to fix the lens and update the the camera on it.

I was launched in 1990 and to this very day I have been in space. I have made over 1.2 million obsevations of space and many galaxys. At once I weighed only 24,000 pounds but ever since my last mission updated I have weighed 27,000 pounds. I am the length of a school bus (13.3 meters) I have a mirror 2.3 meters across. I have also traveled more that 3 billion miles around the Earth.
Low Earth Orbit nasa.gov/mission_pages/hubble/story/index.html

Nash is using Smore newsletters to spread the word online.