Have you ever dreamed what it would be like to be a basketball star? Well that was LeBron James dream and now he has accomplished that dream. LeBron James has many other dreams, but this dream comes with a gift, a gift of passion and talent for the game basketball. 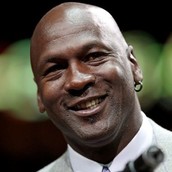 LeBron James was born on December 30, 1984 in Akron, Ohio U.S.A. LeBron's full name is LeBron Raymone James. LeBron's mother is Gloria, LeBron's father never wanted to be a parent so Gloria raised him on her own as well with help from her family. At early age LeBron had much talent and passion for basketball. LeBron's favorite player as a kid was Michael Jordan. Michael Jordan was LeBron's hero in basketball. Michael Jordan is the reason that LeBron wore the number 23 in high school when he went to Cleveland but today he wears the number 6 and plays for the Miami Heat. Also LeBron has lots of potential.

When it came to school LeBron would never mess around. LeBron was always a good kid in school. He got good grades and he always tried to stay positive. Once LeBron's friends were having a party and they invited him. But sense there was a test the next day he decided to stay home and study and get a good night sleep. LeBron knew his grades were more important. The only other thing that was more important than homework to LeBron was family. Also most basketball players have good grades and care about their grades. LeBron is a very athletic man. He always felt bad when his team lost because he knew that he was their teams leader and he was. But he always encouraged his teammates. LeBron never went to college sense he was so good at basketball people wanted him in the NBA(National Basketball Association) right away. Although LeBron was never sad about not going to college he always wishes he could have been a part of March Madness. Sense LeBron's father was never apart of his life I wonder how LeBron feels about that?

Obstacles in life for LeBron

Sense LeBron's father was never apart of his life his mother Gloria raised him for herself. Life was rough for LeBron and his mother, because Gloria faced personal problems during LeBron's childhood. LeBron's mother could never stay in touch with work, so they moved from apartment to apartment. Sometimes they would stay in a friends house. Even though LeBron enjoyed staying with his friends it never felt like home to him.

What was LeBron known for? 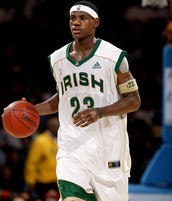 When LeBron was 15 no one was calling his NBA dreams crazy anymore. People jammed into his high school St.Vincent-St.Mary just to see him play! Some people came from all over all the country to see him play! So many people came to his games that they were moved to the University of Akron arena during his final two seasons. With LeBron St.Vincent- St.Mary high won three state championships. When LeBron was a senior it was clear that he was going to the NBA. But the question was which lucky team would get him? At age 17 LeBron was already on sports magazines. The sports illustrators call him the chosen one! Later on LeBron got picked to be one the Cleveland Cavaliers in 2003. All of the Ohio celebrated! Everyone wondered what would happen next. After all LeBron was only 19 would he be able to handle the NBA pressure and was he ready? But LeBron wasn't worried. He said "I'm just looking forward to challenges." LeBron was named Rookie of the year after only his first NBA season in 2003-2004! Later LeBron grew even more stronger. In 2004-2005 LeBron was picked for a NBA All Star Game.

East are the beasts

LeBron playing in all star game for the East team. 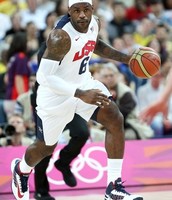 LeBron James playing for U.S.A. in an all star game.

One of LeBron's important quotes are, "Ask me I'll play. Ask me I'll shoot. Ask me I'll pass. It's not what you ask of me. It's what I ask of myself." Another one is " I like criticism, it makes you strong." Also there is "don't be afraid of failure. This is the way to succeed." There is also "It's not about the money for me. It's about winning for me." " Basketball is my life.", and " I never feel sad about not going to college. But I do wish I could have been apart of March Madness. " There are many more than these.

1. LeBron has a foot size of 16. Shoe company's make them just for him because he has such big feet. And sometimes they give them out to fans.

3. LeBron is married to Savannah Brinson and has two kids. LeBron James Jr. and he was born on October 6 2004. And Bryce Maximus James was born on June 14 2007.

Connect with Abbey B