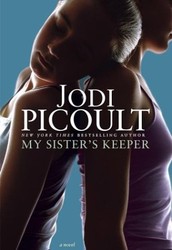 My Sister's Keeper is a novel written by Jodi Picoult in 2004. The story takes place in a fictional town called Upper Darby, Rhode Island where we are introduced to the Fitzgerald family. Brian and Sara Fitzgerald have three kids: Jesse, Kate, and Anna. This family dynamic is consumed by a rare form of cancer affecting the oldest daughter, Kate. Born as Kate's savior sister, Anna takes part in many lifesaving operations and painful procedures over the years to prolong Kate's life. However, Kate continues to relapse. By the time Anna is thirteen years old, she is asked to offer one of her kidneys to Kate in an effort to keep her alive. While Anna is most often willing to provide Kate with whatever she needs, her attitude for this operation is different. With the help of attorney Campbell Alexander, Anna decides to petition for medical emancipation and earn the rights to her own body. Throughout the novel, the author depicts the moral ambiguity of the situation and that things are not always as they appear.

Sara Fitzgerald's Characteristics as a Mother 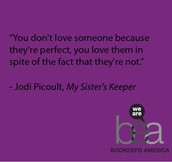 Julia says this quote to Campbell, but it parallels Sara's actions as a mother. She admits that maybe she should have paid more attention to Anna's needs, but ultimately she was just acting in love to save her other daughter.

In the novel, Sara rushes to Kate's side as soon as she hears any indication of pain, discomfort or fear. She often follows that with, "mommy's here."

Devotion to the Donation

As a mother, Sara loves Kate so much that she is willing to overcome any obstacle or face any challenge as long as it means there's a possibility for her daughter's survival. This includes a risky operation that would require a kidney from her other daughter, Anna.

Roles of Motherhood in My Sister's Keeper

She serves as the main maternal figure in the novel. She is mother to Jesse, Kate, and Anna. Her ultimate priority is the maintaining the health of her daughter, Kate. She focuses so much on Kate's needs that she completely disregards those of her two other children. However, at the expense of directing all of her energy and attention to Kate, she fails to be a supportive mother to Kate's siblings. Jesse gets involved in criminal activity, and Anna often combats issues involving her identity and overall self worth. By being so caught up in saving Kate's life, she fails to be truly engaged in the lives of Jesse and Anna. This renders many obstacles and leads to the trial that plays a vital role in keeping Kate alive.

She serves as Anna's guardian at litem for the trial. She genuinely cares about Anna's well-being, which is evident in the way she interviews other characters and provides meaningful insight to Anna. She offers many words of wisdom and provides warmth and guidance that is similar to that of a mother.

Normalcy for the Fitzgerald’s family is fragile in Jodi Picoult’s My Sister’s Keeper. More specifically, Sara Fitzgerald deprives each of her three children Jesse, Kate, and Anna from living a conventional childhood due to the obstacle within their family dynamic. At just two years of age, Brian and Sara Fitzgeralds’ daughter, Kate, is diagnosed with acute promyelocytic leukemia. Sara, however, refuses to let Kate die; early on, the reader learns that Sara’s life is centered on Kate. In fact, Anna is genetically created to benefit her sister. Sara expunges all options that do not align with her primal impulse to protect her daughter, notwithstanding the low survival rate associated with the illness. Although Kate’s prognosis is poor, Sara is tenacious and strong in her effort to provide Kate with a full life. She embodies the notion that love has no limits as she endlessly strives to keep Kate alive.

Sara worries and aims her attention on Kate. Her act of expending all of her energy on Kate impedes her ability to take care of her two other children. Anna and Jesse demonstrate the neglect that they experience as a result of their mother’s sole focus on Kate. Moreover, Sara does not deny the way she views Anna’s purpose. She admits that she spends more time thinking about the benefits Anna can bring to support Kate’s health rather than Anna’s own individuality. Anna’s identity stems from her role as a donor for her sister. Sara does not understand how this lack of attention towards Anna is negative. Instead, she argues that she represents both of her daughters anytime someone affirms Anna’s desired freedom from her lifesaving expectations.

As a mother, Sara is depicted at times as nurturing and comforting, while at other times she could be described as intense and angry. A lot of her frustration and aggression is rooted in her inability to control Kate’s cancer. This explains why Mrs. Fitzgerald slaps Anna when the news of Anna’s medical emancipation lawsuit is revealed.

During the time of the trial, Julia is illustrated as a motherly figure. Julia serves as Anna’s guardian ad litem in order to decide what is truly best for Anna. She views Anna as a separate person, without necessarily taking Kate’s health into account. Julia’s unbiased perspective contrasts Sara, who often dismisses concerns about Anna in the situations where Kate’s needs are put first.

Overall, there is ambiguity between the distinct dichotomy of right and wrong involving Sara’s role as a mother. There is discussion that it is wrong that Sara defines how good of a mother she is based on her ability to keep Kate healthy, but it is difficult to blame Sara for interfering with the quality of Anna’s life when it means maintaining the sanctity of Kate’s. Picoult includes, “‘When you love someone, you’ll do anything to keep them with you’” (369). Anna is put at risk because she is the only person who exists with the ability to save Kate. Sara notes that while this may not be just or fair, it is what is right based on her role as a mother, because “[...] love is far more important than law” (Picoult 409).