keniyah is using Smore newsletters to spread the word online.

Get email updates from keniyah:

What is The Pamlico Sound?

The Sounds are more than just large bodies of water. They are an estuary, a shallow place where salty water from the ocean mixes with fresh water from rivers. The Alembert-Pamlico estuary is the second largest estuary in the Eastern United States. The largest estuary is Chesapeake Bay. Like all estuaries, it is rich with plant and animal life. The estuary is home to young fish, oysters, crabs, and clams. Ninety-two percent of the fish landed in North Carolina depend on the estuary as a nursery habitat. When you visit the Sounds, see how alive the marshy places are with plants, fish, and birds.

The Sounds are also part of a larger system. The Alembert-Pamlico system includes the sounds, the rivers and creeks which flow into the Sounds, and the land surrounding these rivers and creeks. This entire area is called the Alembert-Pamlico watershed. The watershed includes thirty-six counties in North Carolina and sixteen counties in Virginia. Water in the watershed will eventually drain into the Sounds. This water can carry harmful things, such as improperly treated sewage, oil, fertilizer, and pesticides, from distant places into the estuary. 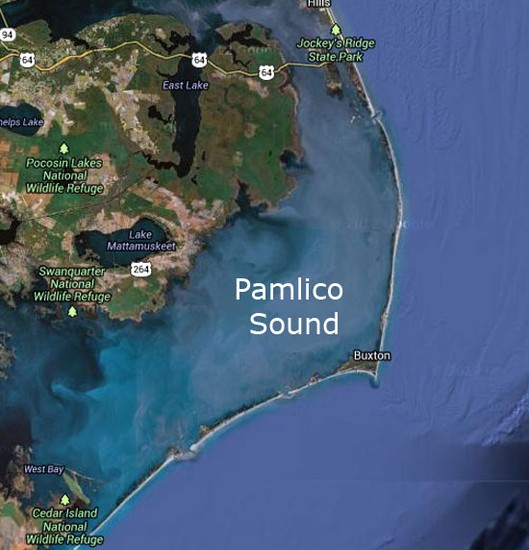 abc11.com
The Coast Guard said both men were found around 1:20 a.m. Sunday, about nine miles southwest from where they originally called for help.

keniyah is using Smore newsletters to spread the word online.