Happy New Year! The Rock Stars returned to school from winter break class ready to continue learning and having fun! We have continued interclass Lit Block and Math Block with students from 1A as well as exploring our Inquiry unit on Homes and beginning our next unit on Maps. There is a lot of important information in this update, so please be sure to read it and let us know if you have ay questions.

In Reading and Writing, we are applying many of the things we have learned about nonfiction text features in reading to our own All About books. Recently, we selected a nonfiction text feature to add to our book as a way to help our readers better understand our topic. A way to support us at home is to have us create books about topics we are experts on. This will help create an authentic writing experience that will also encourage us to practice our letter formation and writing conventions, such as starting a sentence with a capital letter and ending with punctuation.

In Math, we explored place value by breaking apart numbers into tens and ones (or hundreds, tens and ones). You can practice this skill with your child at home by asking them "How many tens are there in 61?" (6 tens) and "How many ones are there?" (1 one).

Next, we began adding and subtracting two-digit numbers without regrouping. (Regrouping involves making or breaking apart groups of 10.) For example, 42+36 or 78-45. Students learned how to use a new manipulative: base-10 blocks (tens and ones) to solve these problems or to solve these problems mentally by separating the tens and ones. For example, for 42+36, students know that 40+30 = 70 and 2+6=8, so therefore, they know that 70+8 = 78!

Once students were comfortable with this, we introduced the idea of "regrouping" with addition. While we as adults often learned about "carrying the 1," today we teach kids the regrouping through place value so that they understand why we are "carrying a 1" rather than just memorizing an algorithm. We showed students how when we add two numbers and the ones equal more than 10, we make another group of ten. For example, with 19+6, the 9 ones and 6 ones make a new ten with five ones--that's why the answer is 25! Next week we will explore regrouping with subtraction.

Our field trip to the SIMS recycling center is Monday, January 30th. Permission slips were sent home today and are due by Wednesday, January 25th.

Addition and Subtraction without regrouping 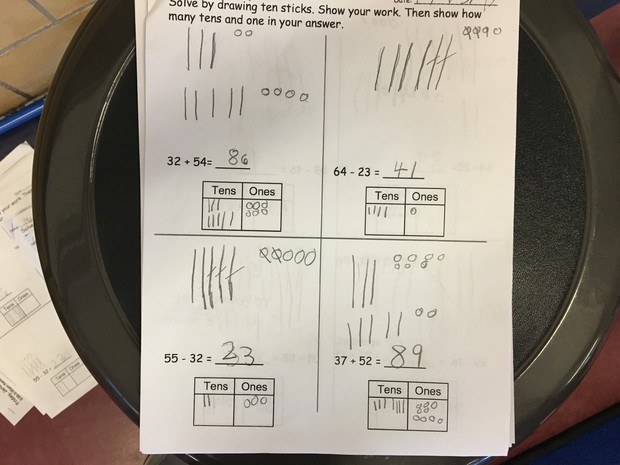 Students learned two strategies for regrouping: utilizing base-10 blocks or adding the tens and ones separately. Students reflected on which strategy worked best for them and why. (see below for examples of both strategies) 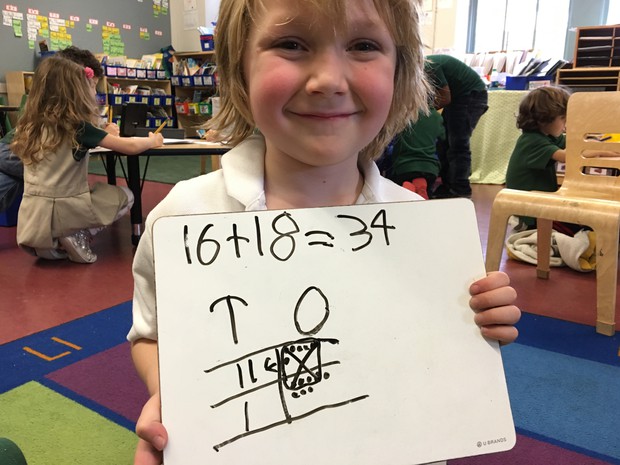 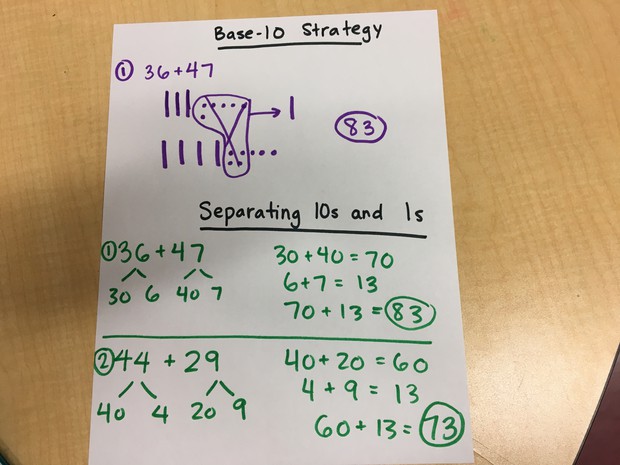 Reflective student of the Week #1: Maxine

Maxine has demonstrated our learner profile for December: reflective. Reflective students think about what they have learned and done. They know what they are good at and what they need to get better at. Here are examples from her classmates of how Maxine showed that she is reflective: 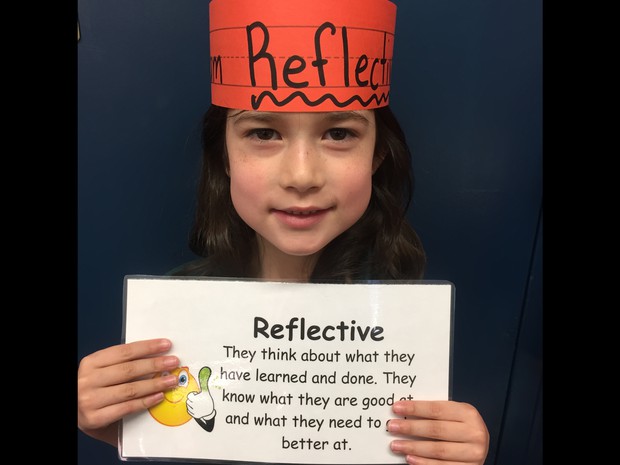 Reflective student of the Week #2: Lluc

The following are examples from the class of how Lluc is reflective: 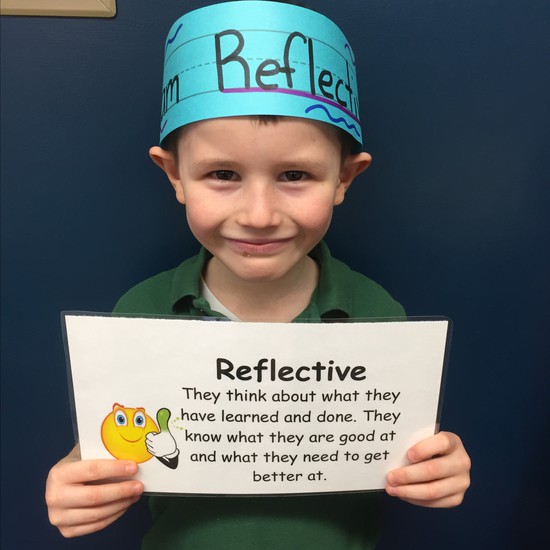 Students continue to look at photographs of homes from around the world, noticing their structure and the materials they were built with.

What affects how a home is built?

The class came up with the following factors: the environment, the materials available, the builder's ideas and the culture of the people.

AJ took questions about his Woody doll during his morning meeting share.

Oola and Jasper lead another round of Monster Squeeze, utilizing a number line to have the class guess a mystery number.

Lena leads morning meeting where students tell the weather, count the days of school, read a message from the teachers and review the daily schedule.

When conditions outside are unsafe, we have recess either in the gym or MPR.

Students use a variety of strategies to solve solve two-digit addition and subtraction problems. Strategies include: using base-10 blocks, drawing base-10 blocks or adding/subtracting the tens and ones separately.

Trixie took questions about her doll during morning meeting.

Students used base-10 blocks to add and subtract two-digit numbers.

We were so excited to go out for recess this day.

Students received most of their instruction this week in their small groups called PODs.

Some students in this photo work on math while others complete puzzles or have a writing lesson with Ms. Thomas.

Other students have choice time. Students rotated through all four activities throughout the week.

Drawing maps of our classroom

We started our new inquiry unit on Maps. Student's learned about bird's-eye view and drew maps of our classroom.

Students explored a variety of maps.

Students explored maps of other cities.

Class map of 1B

We worked together to create a class map of our classroom.

Some students even found their apartment buildings on the maps.

1B kicked off 2017 by starting to learn a lovely folk song that features some cold weather -- “Fox Went Out On a Chilly Night.” Then, after reviewing musical concepts from the fall, 1B started learning songs and doing activities to prepare them for a major first grade musical concept: steady beat! We marched to “The Noble Duke Of York,” tapped heads to “Hickety Tickety Bumble Bee,” danced to “Shoo Fly,” and played a steady beat on instruments while singing “This Old Man.”

As always, if you have any questions, feel free to send me an email at jkramer@brooklynprospect.org.

1B continues to develop their Spanish Brains by listening, speaking, reading and writing in Spanish. Everyday in our Spanish Classroom students read the Español Newsletter. It`s amazing how much they are developing a deeper understanding of Spanish! On January 6 we learned about El día de los Reyes Magos- a holiday celebrated in México, Puerto Rico, España, among others Spanish Speaking Countries. On that day we received a wonderful surprise- we met Maestra Rosado’s nephews (via Skype,) and asked them a lot of questions about Puerto Rico and the holiday. It was a very memorable day! Now, we are getting ready to explore “casa” (house) by reviewing all the shapes that surround us (círculo, cuadrado, triángulo, rectángulo, rombo, trapezoide…).

Last year, at the end of December we had so much fun with the parranda (the Puerto Rican version of parranda). We made maracas with spoons, cups and rice, and then went around the school to sing and surprise with a latin touch. Check out our pictures and videos!

Ps. We are getting ready for our second stop back in time - Kyoto Japan. To begin, we are learning how to say hola, buenos días, gracias y adiós in Japanese. Please check out the video and practice at home. 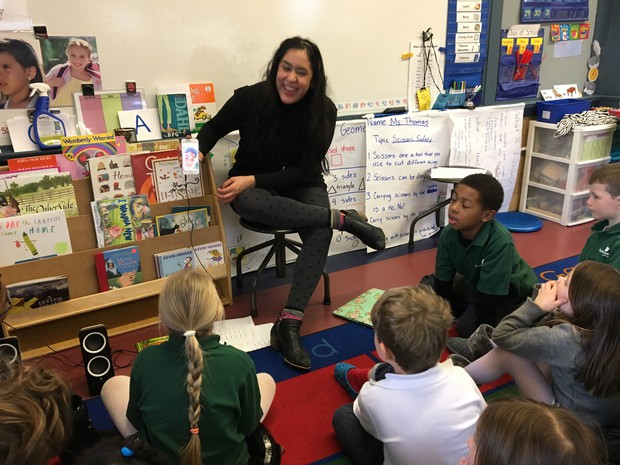