Laurel is using Smore newsletters to spread the word online.

Get email updates from Laurel:

Welcome to Latvia! A beautiful country that you will enjoy very much! As you explore this flyer, you will learn about the geography, tourism, government, and culture of Lativa, Europe! All of these things make up and influence this nations culture and general beauty for tourism!

This flag became official on February 27, 1990. It was the second time for the adoption of a Latvian flag. In different ministries, there are some slight changes to the flag, but overall, the flag remains deep red with a white stripes crossing the center. Fun Fact: The red on this flag is also known as "Latvian red."

A picture of a beautiful city in Latvia!

Just to give a feel for what you would get from traveling to Latvia, here is a picture from there!

Another picture of one of the towns there 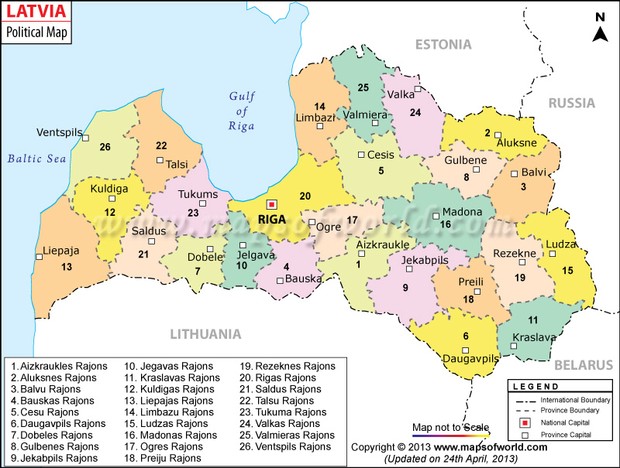 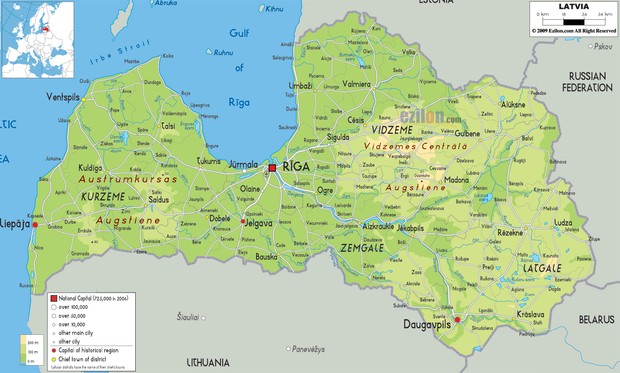 The climate in the region of Latvia overall is maritime. The winters overall here are wet and moderate. The winters this year are snowy and cold with tempurature going down to at most, -8 degrees celcius. Summer lasts for a pretty short time period, from June to August, but is the most pleasant and warm season for Latvia. Riga, the capital and largest city, has a humid continetal climate.Winters are harsh, especially for visiters. Most people who inhabit this country are used to the below freezing temperatures. According to "World Weather Online", April is the best time for tourists to visit this country.

The annual average precipitation of Latvia is 667 meters. The months where precipitation is most common are July and August. The rate of humidity is 81%. The rain continues to pour in places more near the Gulf of Latvia. 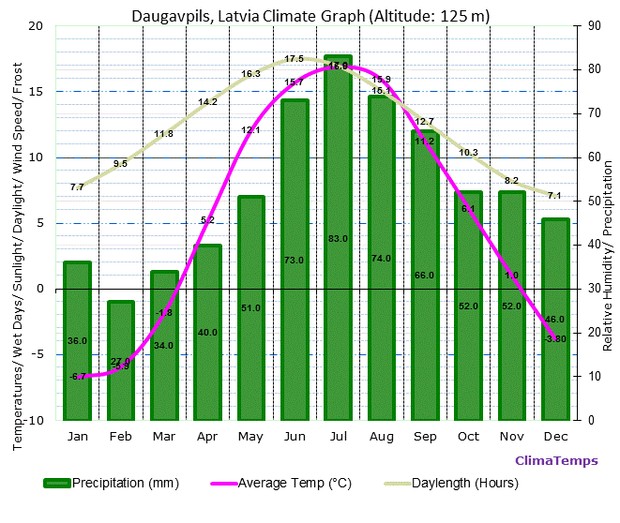 Traditions and Culture of Latvia

This wonderful country has many traditions that celebrate or enhance an event, person or object!

Since Latvia gained independance in 1991, the langauge here has been simply the Baltic language of Latvian. This is closely related with languages spoken in Lithuania. This language is spoken by about 58% of the population by people known as Letts, a native cultural group to this nation. Just about 28% here speak Russian. The remaining about 9% speaks minority languages such as Belarusian, Ukrainian, Polish and Lithuanian. These languages are considered minority languages because they are not typically spoken in this region.

Latvia has many holidays and days of remembrance that its population celebrates. January has two days dedicated to remembrance and recognition of the Latvian Republic and the wars/battles it fought. In May typical holidays like Mother's Day, Europe Day, and an early Labour day are celebrated here. Two commemoration days are celebrated in June for victims of terrorism and heros of war. One of the most important commemoration dates is on July 4 to remember the Jews attacked in the Genocide. Father's day is celebrated in September. Then lastly, common holidays like New Year and Christmas are celebrated in December.

Death is considered to be a view into another world and a right to natural life. Naturally, the funeral is an important part of this impending tradition. The deceased at a funeral will be dressed in their best clothes and laid down next to them are important items from their life. They are laid down also, in a wooden coffin made from a tree of the region they lived in. The funeral, naturally, has friends and family invited to mourn. Those are modern traditions. In older times, the guests would bring food and drinks to serve themselves with.

At the end of summer, the autumn equinox occurs on September 23. People reap grain used for special rituals and also Jumis. Jumis can either mean two fruits on one stalk or two fruits that have grown together. On the completion of reaping, the stalk would have the ears left on and tied in a not. The top of the plant would be turned towards the ground and held down with a heavy object like a rock or soil. When all of the harvest have been completed, festivals are celebrated. Soon after, the Quiet Shadow begins. Basically, this means that people are silent for varying amounts of time. During this time, spirits are believed to come to their house, bless their family, and bless their future work.
Welcome to Latvia

One of the major religions in Latvia is Lutheran. There are other minor religions that are also in this region.

Riga is the capital and largest city in Latvia, so naturally it contains many buildings that contain the heritage of its country. There are thousands of buildings that are deemed valuable. Most of these buildings were created around the 19th century and 20th century.

Some highlights to the tourism here is the castles and large homes that inhabit the area. The larger homes such as manor houses and palaces show just how people here used to live. On the subject of castles, 100 or more are in Latvia. Almost 10 are inhabitable, but remain an impressive sight all the same.

A beautiful picture of a view from Turaida Medieval Castle in Latvia.

A side view from the ruins of the Ludza Castle in Latvia.

The Zuluste Manor in Latvia. This building was made in the late 18th century and lived in well through the 19th century.

The currency used here in Latvia is similar to the rest of Europe: Euros. In conversion to USD, 1 dollar in the US is equal to 0.73 euros in Latvia. Prices and addition of the money tends to vary.

The country of Latvia is a Republic. The Chief of state is President Andris Berzins. The current Head of Government is Prime Minister Valdis Dombrovskis. The next parlimentary election is this year, 2014.

Latvia's economy freedom rate is 68.7. This makes it the 42nd freest country by 2014 standards. Latvia has transitioned into a bigger, market-based economy and has been sharing more with other countries, as well as communicating with them. Unemployment rate is at 14.9%. The population in Latvia is 2.0 million people. Government spending as well as fiscal freedom is going up in this region.

Latvia exports hundreds of things. To name a few, in the mineral and materials area, refined petroleum is one of the most important. For lumber, sawn wood is the biggest in this area. In drinks, as you may laugh, hard liquor is the most important. Cleaning products, cars, clothing items and others are continuing to be made and exported from Latvia. 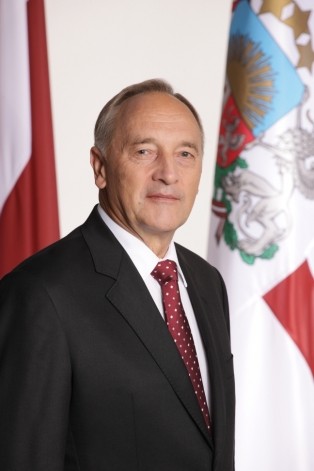 Above is a picture of President Andris Berzins

You and two other people could fly from Chicago, Illinois to Riga, Latvia for exactly 3037 USD collectively. It's quite the steal compared to other flights that are 1000 USD more or higher. This flight goes from May 30, 2014 to one week later on June 6, 2014. It is a round-trip flying coach. This flight is supported and produced by CheapO Airlines.

The hotel being stayed at is deemed the #1 family hotel in Riga. It is Neisburg Hotel. It is good for the travel dates mentioned above. Since it is such a highly recommended hotel, its lowest prices for two people is 458 USD as a deal. Normal price is the same plus 60 USD tax. The hotel is rated five stars in location,sleep quality, rooms, service, value, and cleanliness. It includes a diner, shop, and a beautiful view. The spacious rooms would be enough for you and two friends to have vacation.

This is definitely one of my favorites! This is a more traditional food in Latvia and well loved by its people. In itself, it's a proper meal if served with some fresh bread and vegetables. 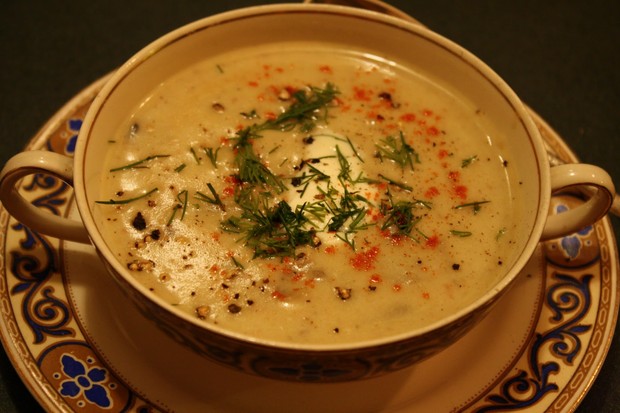 Laurel is using Smore newsletters to spread the word online.