What is Día De Los Muertos?

Día De Los Muertos, or Day of the Dead, is a holiday primarily celebrated in México in early November. It is one of the countries biggest celebrations of the year. The holiday is celebrated by honoring loved ones who have passed away.

Celebrants of Día De Los Muertos set up altars during the holiday to honor their loved ones who have died. The altars are meant to lure the souls of those who passed, back to the living by colorfully decorating the altars with religious items, pictures, things/items the loved one enjoyed during his/her lifetime, and plenty of food.

In addition to festive holiday foods, many people offer to the dead their favorite foods from when they were alive. This altar contains tamales, rice, and beans for the celebrants father. 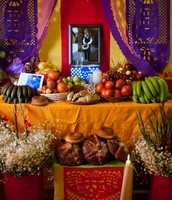