Get email updates from Andrea Issabel: 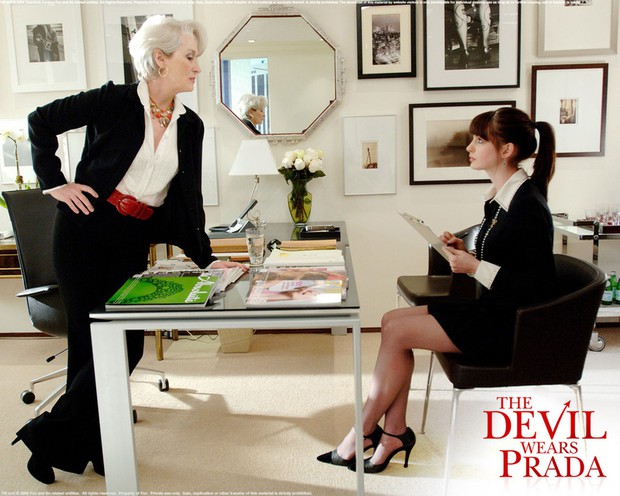 Ten years after The Devil Wears Prada became a best-seller, author Lauren Weisberger is following it up with a sequel! Revenge Wears Prada: The Devil Returns will hit shelves in April 2013, EW reports. The book takes place eight years after Andrea “Andy” Sachs quits Runway Magazine, and she’s now editing a hot bridal publication called The Plunge, alongside her Runway-nemesis-turned-friend Emily. Andy’s past catches up with her when she runs into her ex-boss Miranda Priestly, who hasn’t forgiven her for leaving her job on bad terms. Our fingers are crossed that a movie sequel won’t be far behind—we’d love to see Anne Hathaway, Emily Blunt, and Meryl Streep together on the big screen again!

Andrea Sachs, a small-town girl fresh out of college, lands the job “a million girls would die for.” Hired as the assistant to Miranda Priestly, the high-profile, fabulously successful editor of Runway magazine, Andrea finds herself in an office that shouts Prada! Armani! Versace! at every turn, a world populated by impossibly thin, heart-wrenchingly stylish women and beautiful men clad in fine-ribbed turtlenecks and tight leather pants that show off their lifelong dedication to the gym. With breathtaking ease, Miranda can turn each and every one of these hip sophisticates into a scared, whimpering child.

Meryl Streep, Anne Hathaway. A young woman lands an unlikely position as assistant to a demanding fashion magazine editor whose high expectations make the job more like that of a whipping girl than an assistant-in. This clever, funny big-screen adaptation of Lauren Weisberger's best-seller takes some of the snarky bite out of the chick lit book. 2006/color/109 min/PG-13. Shop now from amazon

Fashion shows tend to be set to pretty cutting-edge music these days, but you'd hardly know it based on the soundtrack to this movie on life at a fashion mag: Not only does it start with Madonna, but the song is "Vogue"--pretty much the single most obvious choice there could be. That said, "Vogue" remains a great track: It hasn't aged one bit since its 1990 release, and fits in well with the first of two variations on dance music offered here: club anthems (see also DJ Colette's "Feelin' Hypnotized," David Morales and Tamra Keenan's "Here I Am") and sophisticated lounge (Bitter:Sweet's "Bittersweet Faith," Mocean Worker's "Tres Tres Chic"). The latter style also feeds directly into Theodore Shapiro's score, which is represented only on the jazzy suite that concludes the CD. The balance of the tracks is made up of elegant, well-crafted songs that feel perhaps a bit too… polite (Alanis Morissette's cover of Seal's "Crazy," Moby's "Beautiful"). It would have been nice to get more curve balls, like the aforementioned Mocean Worker and Azure Ray's lovely "Sleep," which fans of Imogen Heap should dig. Shop now from amazon