Km Zero to all ARG destinations

Km Zero to all ARG destinations 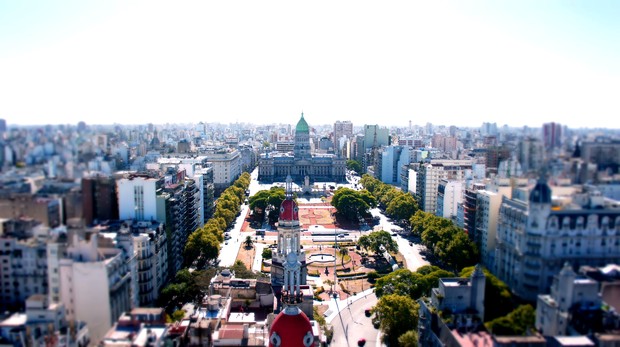 As it usually happens in big cities, people daily use defines new boundaries that overlap the limits stablished by geography. And that’s what happens with Congreso, this 30 block area is composed of 3 diferent neighborhoods: Monserrat, Balvanera, San Nicolas.

But what creates the identity of this virtual and unofficial neighborhood ?

As its popular denomination let us know the main feature of this area is the presence of the Palace of Congress. Located on the Entre Rios Avenue, it reigns over the majestic Congress Square, which is ornated with a variety of famous sculpture, fountains and monuments.

The grey lime stone neoclassical style Palace of Congress flaunts the biggest dome tower in town, probably the most typical Buenos Aires icon after the 9 de Julio’s Obelisc. The Greco roman structure and decoration was specifically chosen to represent the purpose of the building: justice and democracy.

In the Congress square it is also located the argentinian geographicall belly button, the zero Km monolith is used to mesure road distances in all directions.

Down the plaza, Avenida de Mayo awaits. This street connects the two main government buildings in the city, the Casa Rosada and Plaza de Mayo with the National Congress and Plaza Congreso. Built in 1885, the avenue is often compared with La Gran Vía in Madrid. In its café, billiard halls and restaurant is quite easy to track the Spaniard heritage. Both architecture and gastronomy in the area hold a strong iberic influence.

Both sides of the street are lined with tall, decorative neoclasical and art nouveau buildings with wrought-iron balconies, grand entrances, ornamental columns and sculptures.

Another highlight in this zone is the Barolo Palace, the excentric and refined early 1900 skyscraper inspired on Dante’s Divine Comedy, that has a lighthouse on its rooftop.

But apart from the bust and hustle of these iconic spots, the streets that surround the main area are full with turn of the XX century constructions, some in good conditions, some not, giving the place an atmosphere of glorious decay. The presence of sycomares in the sidewalks filter the light and obscure the building facades, making their both beautifull and mysterious.

Noisy during daytime and bit lonely in the night, for those living in Congreso is not a bad idea to be a little aware -specially in the narrow streets -during night time, in order to avoid safety problems.

On the other hand the nearness of the Callao and Corrientes avenues, provides a great acces to the never sleeping side of Buenos Aires. Corrientes is the local Broadway Av, for both mainstream and underground theater productions. It is also crowded with classical porteño Pizza places, cafes, cinemas, and book shops.

And finally as it could be expected it is very active political area. Marchs, protest and political acts from a broad idelogical background are part of the common landscape. Porteños are loud people and this is part of BS As is not the exception to the rule.

Congreso is a must in every Buenos aires experiences list, cuture, politics and entertainment, in a particular mix worth to be tried.