A Whirlwind Trip of Monster Legends From Around the World

A Whirlwind Trip of Monster Legends From Around the World

Come to Scotland and Visit the Loch Ness Monster!

Have you ever wanted to see a real live monster? Come visit The Loch Ness Monster in the Loch Ness area of Scotland, a country that is part of the United Kingdom.

Nessie is a lake monster. Some people think that she may be a dinosaur called a plesiosaur, while other people think she is a giant eel. Even though people have reported sightings of Nessie from as far back as the 6th century, no one has ever been able to prove whether or not she really exists. Supposedly, she is around 30-40 ft long, with a long neck and humps that move up and down in the water. Since the 1930's, there have been hundreds of eyewitnesses who claim to have seen the Loch Ness Monster.

Nessie is not considered a dangerous animal, although some stories about her indicate that she has charged at boats or chased people on land.

There are many photos, films, and underwater sonars of some odd things in the loch, but none of them have been able to prove that there really is a monster in the water. The Scottish Loch is a freshwater lake that is almost 37 miles long and very deep, almost 800 ft deep in some places. The water is extremely cold and has poor visibility due to heavy peat moss floating in the water. Geographers believe that there were once underground tunnels beneath the loch which flowed in to the sea.

Tourists should come visit the Loch Ness with their video cameras and try to catch a sight of Nessie. There are many wonderful hotels in the towns of Inverness and Drumnadrochit, the castle Urquhart, museums and art galleries, camping, hiking, golfing, and a wide variety of shopping and sight seeing in the Highlands.

Hugh Gray, a surgeon, took this famous picture of the Loch Ness monster over 80 years ago. It was the first time anyone had ever captured Nessie on film. The first photo of Nessie was published in The Daily Mail on April 21, 1934.

Over time, it has been proven that this photo was a fake - but many people still believe in Nessie!

Is Nessie an extinct dinosaur?

This image could be a picture of what the Loch Ness Monster might look like if it really is a type of plesiosaur . This is a replica image of a plesiosaur, a type of long-necked sea serpent that lived over 200 million years ago. Plesiosaurs were not dinosaurs, they were marine reptiles - but they lived at the same time as the dinosaurs did.

The Loch Ness is located in the Highlands of Scotland. The countryside is well known for its beauty and its ancient history.

Scotland in the Summertime

4. You can get around Scotland by bike, car, bus, boat, and train.

Nessie can't wait to meet you!

Visit our travel agents for more information on flights and hotels.

The Man Who Made the Loch Ness Monster 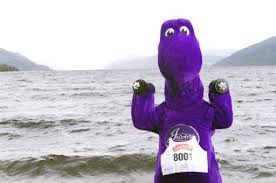