Get email updates from kaitlyn:

Miles Halter (aka "Pudge") is seeking his great perhaps. He leaves his drab life at home to travel to Culver Creek boarding school in Alabama. He hopes that he will be able to start over here and experience life as he thinks it should be. Upon arriving, he meets a quirky couple of other teenagers, causes some trouble, and even falls in love. His journey is moving, heartbreaking, and still manages to be hilarious all at once.

The Colonel is the first person Pudge meets when he gets to Culver Creek. He's a short, but tough guy with a big personality and a southern air about him. He and Pudge become best friends, despite how opposite they seem, and make memories that will never fade...for better or for worse. The Colonel is a very important person who has a huge influence on Pudge and he really helps him to come out of his shell and moves the plot along by leaps and bounds by doing so.

Takumi is the one asian boy in the school (they joke about him being the one asian person in all of Alabama) and he's basically the cooler, smarter version of Pudge. He's not a huge part of the book until the middle, but once you get to know him, he's a really cool character. Especially at the point where he ditches being Takumi and starts referring to himself as "The Fox". A very funny character with some of the most serious moments.

She named herself when she was little, she's got an enigmatic past, she's a hurricane stuck in the labyrinth of suffering, and she smells like vanilla and cigarettes. Obviously, Alaska is a pretty complex character and she is often described in metaphors which can make it difficult to describe what she's really like. A beautiful and mysterious girl with a heart-wrenching past. You'll be sucked in by her character and you'll never want to let go.

"that is the fear, I have lost something important, and can't find it, and I need it. It is fear like if someone lost his glasses and went to the glasses store and they told him the world had run out of glasses and that he would just have to do without." 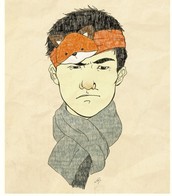 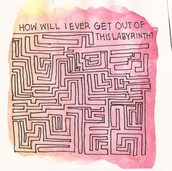 the labyrinth of suffering mentioned throughout the book 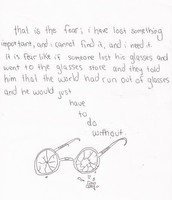 this song is all about leaving home and it's restrictions in pursuit of something better. This song is actually a part of it's own story because the album plays out like a sort of musical, but it still shows what's being conveyed in the first chapters of the book.

This song sort of represents the awkward interactions that Pudge has with the people around him before the plot really develops. This song can be applied to Alaska in particular.

Now the story is developing a little more and Pudge is getting to experience life in a new way. He goes on adventures and causes trouble. He is starting to feel alive.

Pudge's feelings for Alaska are getting more fully developed at this point and he pines after her for a good chunk of time.

5. Flowers In Your Hair {The Lumineers}

This song is specially for a moment that Pudge and Alaska share that involves looking up at the sky, snuggles, and a gross bottle of strawberry wine. If you've read the book, you know what i'm talking about.

I know Lorde is old news now or whatever but this song fits perfectly with how Pudge grows into his new group of friends and really finds himself.

This is the song I'm choosing for SPOILER ALERT!!!!!!!! ....the last night Pudge sees Alaska. Despite what happens next, that night is a big change for Pudge and it's overwhelming, exciting, and also a little scary. The upbeat tone of the song and some of the lyrics like "she hits like ecstasy..." describe perfectly how strongly he feels for Alaska. She is like a drug to him and he finally gets to be with her just briefly. This song also works as foreshadowing for what's to come with lines like "free up the cheaper seats, here comes a greek tragedy..." and it all just fits really well for all the buildup that occurs.

This is a pretty sad, quiet song that really reminded me of Alaska's character and I feel like this would be the song to hear when she is suddenly gone. It's the feeling of looking back and reflecting on the memories of Alaska. It embodies her character and conveys the sadness she kept inside as well as the sadness that those she touched now feel.

No buses focuses on love...or a mess of love I guess. And, at this point, that's what the story is. Pudge is a wreck, he and The Colonel develop a cute bromance, there's a bunch of drama with Pudge's "girlfriend" (who I try to just pretend was never a character), and Takumi reveals more about his feelings. Everybody is just a mess of emotions and Alaska is just gone. - Piledriver Waltz is all about heartbreak which also ties in well with this part.

Pudge tries to cope with his feelings and sort out his head and I like this song for that because the main line is "you should be loving someone" which really fits how Pudge is feeling. He feels like he owes something to Alaska and he declares that he LOVES her. Still- not past tense. (you have to read the book to fully get the meaning of that)

11. Stuck On The Puzzle {Alex Turner}

Pudge and The Colonel investigate what exactly took their friend from them and why it happened. It's heartbreaking to read, but this song depicts the investigative aspects of this part of the book pretty well.

12. RIP To My Youth {The Neighborhood}

This is another song that very much reminds me of Alaska Young. I think that it really fits in with her past and It works well later in the story when Pudge is delving deeper into who she was.

This song makes me think of the anxieties and urges that are all driving Pudge to dig deeper and try to find closure in finding out what happened to Alaska. It also makes me think about how he must have some deeper urge to just leave it all.

This is a point in the book that's just really dark and Pudge finally sort of gives up on learning the truth just like everyone else.

Pudge learns the truth about Alaska and he and his friends are heartbroken. They still love her but there's a lot of betrayal being felt and a lot of pain.

This is an empowering song that represents Pudge's self realizations and his acceptance of all that's happened.

The grand finale. The final part where things turn around just enough for the readers to know that everything will be okay.

MORE SONGS: I have many more recommendations for this that just didn't fit on the list so just ask for more :)