Check out the new lists for the 2016 competition.

Check out the new lists for the 2016 competition.

What is the Name That Book Challenge?

Students are encouraged to read as many of the books from their grade level list as possible.

The BISD Name That Book Finals will be held during the spring semester of 2016.

Dog vs. Cat by Chris Gall

Eieio: How Old MacDonald Got His Farm Back by Judy Sierra

Elephant & Piggie: Waiting Is Not Easy! by Mo Wilems

How to Read a Story by Kate Messner

I am Cow, Hear Me Moo! by Jill Esbaum

I Dare You Not to Yawn by Helen Boudreau

I will never get a star on Mrs. Benson's Blackboard by Jennifer K. Mann

Memoirs of a Hamster by Devlin Scillian

My Grandfather's Coat by Jim Alyworth

My Teacher is a Monster by Peter Brown

The Bear Ate Your Sandwich by Julia Sarcone-Roach

The Scraps Book: Notes from a colorful life by Lois Ehlert

Walk on the Wild Side by Nicholas Oldland

What Do You Do With an Idea by Kobi Yamada 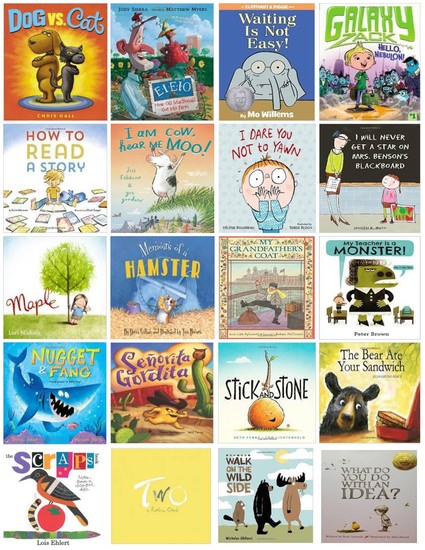 Case of the Time Capsule Bandit by Octavia Spencer

Desmond and the very mean word by Desmond Tutu

Mr. Ferris and his Wheel by Kathryn Gibbs Davis

Ophelia and the Marvelous Boy by Karen Foxlee

Red Bicycle: The Extraordinary Story of One Ordinary Bicycle by Jude Isabella

Rescue on the Oregon Trail by Kate Messner

The Beatles were Fab and Funny by Katherine Krull

The Worst Class Trip Ever by Dave Barry 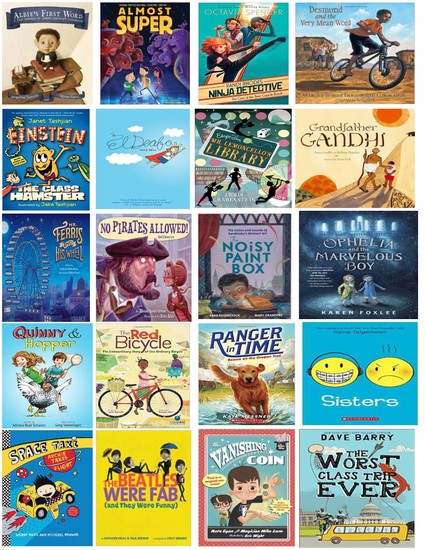 Adventures of Nanny Piggins by R. A. Spratt

Hero's Guide to Saving Your Kingdom by Christopher Healy

Snicker of Magic by Natalie Lloyd

The Lost Planet by Rachel Searless

The Right Word: Roget and His Thesaurus by Jen Bryant

Zane and the Hurricane by Rodman Philbrick 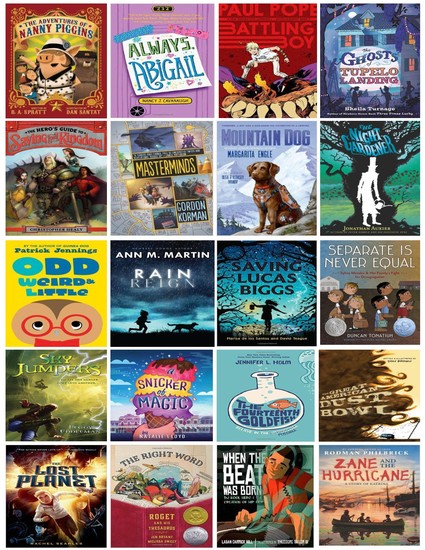 An Ember in the Ashes by Sabaa Tahir

In The After by Demitria Lunetta

No Summit Out of Sight by Jordan Romero

Shadow and Bone by Leigh Bardugo

The 5th Wave by Rick Yancey

The Impossible Knife of Memory by Laurie Anderson Halse

The Selection by Kiera Cass

The Silver Six by Al Lieberman

There Will Be Bears by Ryan Gebhart 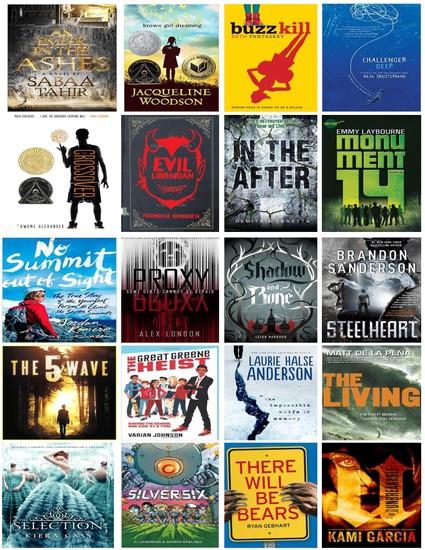 All the Light We Cannot See by Anthony Doerr

Love Letters to the Dead by Ava Dellaria

The Family Romanov by Candace Fleming

The Strange and Beautiful Sorrows of Ava Lavender by Leslye Walton

This One Summer by Mariko Tamaki

We All Looked Up by Tommy Wallach

What If? Serious scientific Answers to Absurd Hypothetical Questions by Randall Munroe 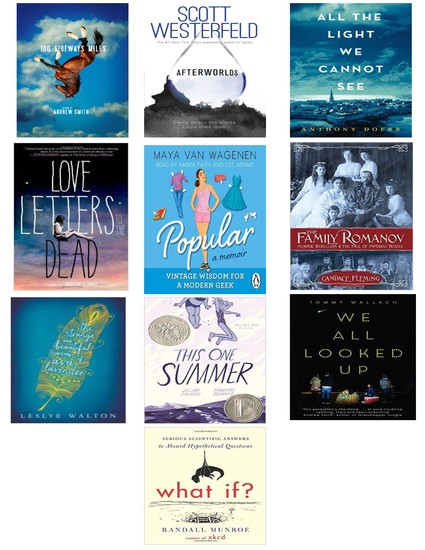