mady is using Smore newsletters to spread the word online.

Get email updates from mady:

By: Mady, Eryka, and Natalie

By: Mady, Eryka, and Natalie 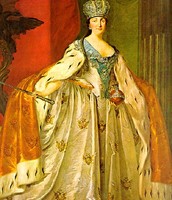 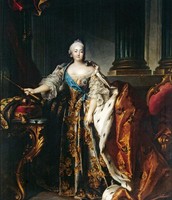 Catherine II, known as Catherine the Great, was empress of Russia, and led her country into the political and cultural life of Europe, carrying on the work begun by Peter the Great. 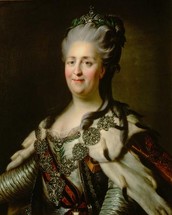 Who was Catherine the Great?

Catherine the Great, also known as Catherine II, was an empress of Russia who ruled from 1762-1796, the longest reign of any female Russian leader.

She was the daughter of a German prince

She arrived in Russia in 1744 and later married Peter, grandson of peter the great however the marriage turned out to be an unhappy one with each of them cheating on each other many times

Background of her life

Catherine the Great started out as a minor German princess. Her father, Christian August, was a prince of this tiny dominion, but he gained more fame for his military career. Princess Johanna Elisabeth, Catherine's mother, had little interest in her daughter. Instead, Johanna spent much of her time and energy on Catherine's younger brother Wilhelm Christian, but the boy died at the age of 12. Catherine on the other hand was nurtured by her governess Babette.

As Catherine grew up, her mother eventually came to see her daughter as a means to move up the social ladder and improve her own situation. Her mother had relatives in other royal courts in the region, and brought Catherine with her on visits to seek out possible suitors. Catherine on the other hand saw marriage as a way to escape from her controlling mother.

Educated by tutors, Catherine had religious studies with a military chaplain, but she questioned much of what he taught her. She also learned three languages: German, French and Russian. The Russian came in handy when Catherine's mother wrangled an invitation to St. Petersburg from the Empress Elizabeth; Elizabeth had once been engaged to Johanna's older brother, who died of smallpox, and she felt a connection to Johanna's family. She wanted to see if Catherine would be suitable for her heir, Grand Duke Peter (later Peter III).

In 1744, a teenage Catherine traveled with her mother to Russia. She soon fell ill, and her treatment created conflict between her mother and the Russian Empress, Elizabeth. Elizabeth insisted on numerous bloodlettings, while Johanna protested the procedure. When Catherine recovered, she moved forward with her relationship to Grand Duke Peter. The pair became engaged, and Catherine converted to the Russian Orthodox faith, despite her deeply Lutheran father's objections. Along with her new religion, she also received a new name—Yekaterina, or Catherine.

On August 21, 1745, Catherine II married into the Russian royal family, becoming a grand duchess. She and Peter proved to be anything but a happy couple, however. Peter was immature and juvenile, preferring to play with toy soldiers and mistresses than to be with his wife. Catherine II developed her own pastimes, which included reading extensively.

After Empress Elizabeth's death on December 25, 1761, Catherine's husband assumed the throne, becoming Peter III, while she received the title of Empress Consort. The pair were leading separate lives at this point, and she had little to do with his rule. Peter was openly cruel to his wife, and often discussed pushing her aside to allow his mistress to rule with him. After six months, Peter was overthrown in a coup orchestrated by Catherine.

Catherine did have support of the people and the army

How did she expand Russia?

Under her reign, Russia expanded its territories and modernized, following the lead of Western Europe. Russia's border expanded to the Black Sea and into central Europe.

What was her involvement in the Enlightenment period?

The Russian Age of Enlightenment was a period in the 18th century in which the government began to actively encourage the proliferation of arts and sciences, which had a profound impact on Russian culture. During this time, the first Russian university was founded, a library, a theater, a public museum, as well as relatively independent press. Like other enlightened despots, Catherine the Great played a key role in fostering the arts, sciences, and education.

Catherine wished to bring Russia up to par with its neighbors not only in a military sense, but also politically, culturally, and intellectually.

Known for her intelligence and ambitions to rule the Russian Empire, Catherine not only challenged the social norms of the time but also set the precedent for women in powerful positions. Catherine ruled through corruption, scandal, political reforms, and land expansion. She consolidated power from the serfs and feudal lords by continuing the political reforms started by Peter the Great. Land expansion dramatically increased during the Polish civil war in the late 1760's and again in 1768 when a Russian victory over the Ottoman Empire resulted in new territory stretching to the banks of the Black Sea . In addition to this, Catherine imported many great works in literature, art, and print from the Western European nations. St. Petersburg blossomed sculptures, palaces, and educational systems. Education and law codes further developed under her reign. At the end of her thirty-four year reign from 1762 to 1796, Catherine had catapulted Russia into the world scene as a major world empire. 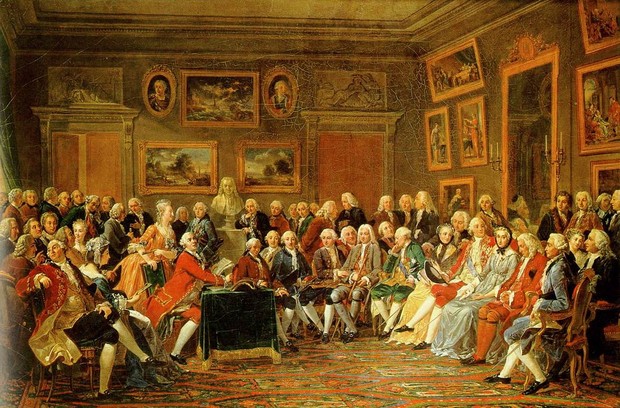 She always stayed loyal to her lovers even after their relationships had ended, she gave them titles, land, and palaces.

She created one of the world’s most impressive art collections in St. Petersburg’s Winter Palace (now home to the Hermitage Museum).

Her enemies at court began spreading rumors about Catherine’s death. Some said that she had died while on the toilet. Others went even further, telling a myth that has endured for centuries, that Catherine had died while engaging with an animal, usually believed to be a horse. This is just a rumor. Catherine really just suffered a stroke and died quietly in her bed.

Documentary Films: Getting to Know the Real Catherine the Great

departments.kings.edu
Annotated Bibliography of Catherine the Great, Empress of Russia

departments.kings.edu
Annotated Bibliography of Catherine the Great, Empress of Russia

www.history.co.uk
Intelligent, ruthless, sexually insatiable: she was the most powerful woman in the world, dragging Russia 'out of her medieval stupor and into the modern world'. Born Sophie Friederike Auguste von Anhalt-Zerbst, the daughter of a German prince, she was related through her mother to the dukes of Holstein. In 1744, she arrived in Russia, as the Grand Duchess Catherine Alekseyevna, and married Peter, grandson of Peter the Great and heir to the throne. Russia at the time was ruled by Peter's mother, the empress Elizabeth.

mady is using Smore newsletters to spread the word online.