Get email updates from Theresa:

Addition and Subtraction of Fractions Unit

Addition and Subtraction of Fractions Unit

prime number-a whole number with only one factor pair; 1 and itself

composite number-a whole number with more than one factor pair

numerator-the number above the fraction bar

denominator-the number below the fraction bar

convert-to change from one form to another form

common denominator-two or more fractions having the same valued denominator

Converting fraction into a decimal 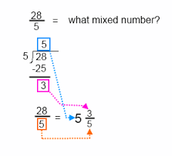 4.) Convert this mixed number to an improper fraction:

5.) Convert this improper fraction to a mixed number: