The Silence of Murder

The Silence of Murder 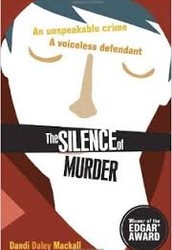 Rita- mother of Hope and Jer

Chase- pitcher on the team

Coach Johnson- the one who got murdered

Jeremy and Hope Long grew up constantly moving from place to place. Finally they ended up in there mothers, Rita, hometown. They've been living there for three years. Jer who chooses not to speak was put on the baseball team. Jer actually didn't play he was considered the "Bat Boy", the job consisted of doing the usual chores. Jer also worked at Coach Johnson's horse stable. He cleaned out the muck in the stalls. One day Jer came home with a bloody bat. Few moments later, Jer was arrested for murder. When Hope found out the news she was certain Jer didn't kill Coach. When Jer went up for trial, Raymond, Jer's lawyer was certain Jer did it, but they're pleading for insanity. Jer isn't the most usual person. Jer collects jars full of air and if one breaks he gets very frustrated. Jer also had other break downs. T.J., Hope's friend, is in charge of taking Hope to and from court. So he asks Chase, a wannabe pitcher to drive them. Chase owes T.J. because T.J. got Chase to be the starting pitcher for a big game. Hope is determined to find the real killer. Chase and T.J. help Hope.

One night Hope was at home all alone. She kept receiving phone calls from some random person saying "you better watch out!" Chase came over and helped Hope. Whenever Hope goes somewhere there is a white pickup that follows her. She never knows who it is. Chase and Hope's relationship takes a big step and they start dating. T.J. isn't happy about that so he leaves Hope.

While Chase and Hope were hanging out one night, they saw the white pickup. They crashed into the pickup, only to find out it was Sheriff Well's, Chase's father.

On the last day of court, Hope brings four jars to court. She opens the jars and reads the paper that is inside and it says, "The day I found out Coach was my father". Jer wrote that. Jer was at the stables at the time Coach was murdered. Rita was there yelling at Coach, to give her money. Rita then left angry. Jer overheard the conversation and found out that Coach was his father. In the third jar the note said, "The time when Chase was running away from the stables". The fourth jar said, "When my dad was murdered". Chase Wells confessed and said he was the murderer. Not Rita, not Caroline and definitely not Jer. So, the bat Jer had was the one Chase used, but Jer was trying to protect whoever murdered his dad. Chase killed Coach Johnson because he ended up not on the list of pitchers for the big game. He got a little out of control and hit Coach. He didn't mean to, he just got a temper. As for Sheriff Wells, he knew Chase killed Coach all along, but wasn't going to do anything about it.

Well, I live in a town where it is very rare for somebody to get murdered. But I do live in a world where that happens a lot.

Don't always jump to conclusions. Anything could've happened. Because anything is possible.