Angelie is using Smore newsletters to spread the word online.

Get email updates from Angelie: 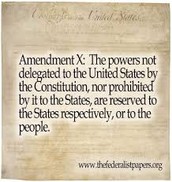 The powers not delegated to the U.S. by the Constitution nor prohibited by it to the states respectively or to the people.

It was based on Article II of the Articles of confederation,that stated that, " Each state retains its sovereignty, freedom and every Power, Jurisdiction, and right, which is not stated by this confederation expressly delegated to the United States, in congress assembled."

In my own words, the amendment says that if it doesn't say anywhere in the Constitution that the states can't do something, the states have the power to do it.

Carol Anne Bond poisoned, harassed, and threatened her pregnant friend because the father of her baby was her husband. The Supreme Court charged bond with two counts of possessing and using a chemical weapon in violation of a statue and two counts of mail theft. They rejected her arguments because they were violating the tenth amendment. Bond was found guilty and received a 6 year prison sentence.

Angelie is using Smore newsletters to spread the word online.