at the beginning of the war nether side wanted its enemy to trade with the united states.Both France and grate Britain threatened to attack American ships and take their cargo. Grate Britain also blockaded France ports so the United states could not ship goods to and from France.

we fight for are cargo yet they stet stole the cargo. they lost a lot of people have died but we won the battle on the land.

battal on the sea.

whe war on the sea started the frans thought that they can take ae cargo and kill are men we were out numbered but we out powered them with are gun and canons. 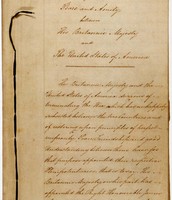 end of the battle

finally after 6 grate years we won the war and sind a peas trade that said the war was over. over 1.000.000 people died of that war.