What Is The Great Rift Valley? What's So Special About It?

The Great Rift Valley runs for 4,000 miles, from Jordan in southwestern Asia to the coast of the Indian Ocean in central Mozambique. The valley is 30 to 40 miles wide on average but reaches nearly 300 miles at its widest section in the Danakil Desert in northeastern Africa. The steep walls of the valley rise about 3,000 feet above the valley floor. In some places there are cliffs that reach 9,000 feet high. The valley is situated in a region where three tectonic plates meet. Tectonic plates are large sections of Earth’s crust. Millions of years ago the plates began to move apart because of forces within Earth. Those forces also result in volcanoes. Mount Kenya and Mount Kilimanjaro are two of the tall peaks formed by volcanoes in this area. The Great Rift Valley is home to many animals and birds. Some of these animals are elephants, giraffes, leopards, endangered black rhinoceroses, and giant eagle owls. There are several wildlife reserves in the Rift Valley. Many tourists visit to see the wildlife and to admire the dramatic scenery. Some of the earliest humans lived in the area of the Great Rift Valley. In 1974 an American paleontologist found bones belonging to an early human in Ethiopia. The skeleton, which was female, lived about 3 million years ago. It was given the name Lucy. Scientists have found bones of many other early humans who lived in the area as well. 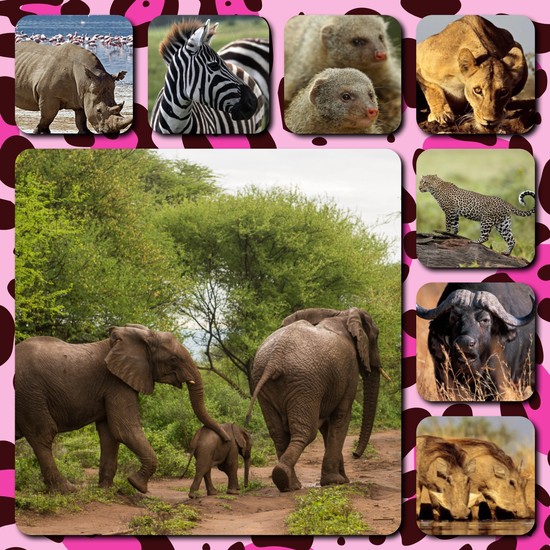 This photo(s) shows all the kinds of wildlife in the Great Rift Valley.