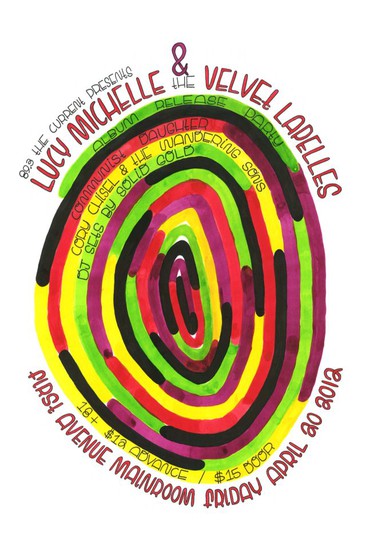 Lucy Michelle and the Velvet Lapelles will be taking over the legendary First Avenue Mainroom in Minneapolis, MN on Friday, 4.20 to celebrate the release of their new album HEAT. The band will be joined by Communist Daughter, Cory Chisel and the Wandering Sons and Sold Gold (DJ Sets). Come and Party...

DJ set/dance party to close out the night

Lucy Michelle and the Velvet Lapelles have completed work on their fourth full length release, HEAT, at Vacation Island Recording Studios in Brooklyn with acclaimed producer/engineer Matt Boynton (MGMT, Beirut, Bat for Lashes). The new record is comprised of all original material written predominantly by Lucy Michelle during the bone-chilling Minnesota winter of 2010. Many of the songs center around the feeling of being trapped and isolated while yearning to be somewhere else; physically or psychologically. HEAT showcases the artistic growth and sonic evolution of the band’s sound which translates into a magnificent record laced with scorching lyricism, hauntingly beautiful melodies and gorgeous harmonies that create an expansive, yet highly focused and cohesive body of work.

WHO ARE LUCY MICHELLE & THE VELVET LAPELLES?

Take a pinch of mountain gypsy, a dash of psych-folk and a combine it with an ocean of split-open-and-melt lyricism, intricately delivered by one of the most unique voices in music, and you have Lucy Michelle and the Velvet Lapelles. Since bursting onto the Twin Cities music scene in 2008, the fiery five-piece have blossomed into one of the most celebrated and cherished young talents to emerge from Minnesota in recent history.