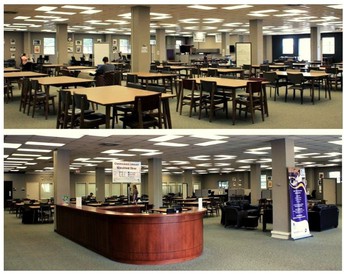 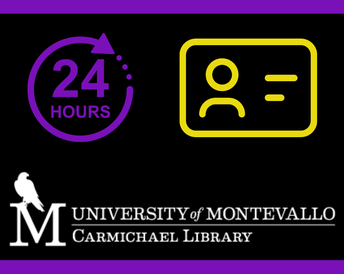 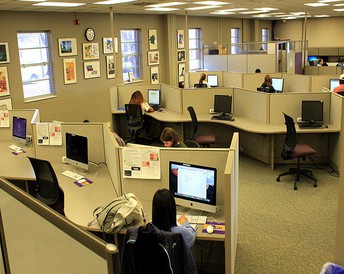 In Fall 2022, Carmichael Library launched a pilot program to extend 24-hour access to the ground floor of the library from Sunday - Wednesday. You can review our 24 hour library guide for information, including policies and amenities. Or read this feature in The Alabamian.

Where did the idea come from?

This idea was initially proposed by Sheila Brandt (Systems Librarian) and Kaycee Ledbetter (former Circulation Manager). We had received comments about the library staying open later, so Sheila and Kaycee began to investigate a space where UM students could safely study in the late night hours. After researching other universities that offered such a service, they identified the ground floor of the library as an ideal location due to amenities such as computers, printers, study tables, restrooms, vending machines, swipe-entry door, and multiple security cameras. Further, Dr. Charlotte Ford (the library director) spoke with colleagues whose libraries offered 24-hour spaces. And, she consulted with Chief Alexander of the UM police department, the Solution Center, and Learning Enrichment Center before taking the idea to the Provost for official approval. Fortunately, everyone was on board for a pilot this Fall, so we drafted formal policies and worked through some details with the Physical Plant.

Previously, the library closed at 1 AM Sunday through Wednesday and at midnight on Thursday during the semester. However, we knew from our statistics that very few students checked out materials or used other library services after midnight - they were here to study or work on a computer. It has also been challenging to staff the last hour (midnight to 1 AM). The 24/4 library allows us to offer longer hours on our busiest nights, without having our library workers stay up too late and feel exhausted the next day.

How has it been going so far?

The new hours started on August 28th. So far, there have been some students using this space, with an uptick after returning from Labor Day holiday. Urist McCauley, our Evening Supervisor, works with the library student assistants to ensure a smooth and safe transition each night. We are monitoring usage and keeping an eye out for any problems that might arise. We are excited about the project, and hope it is well received! 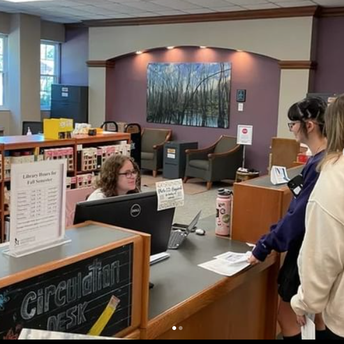 Team Up for Library Instruction

Our librarians are busy teaming with a variety of classes to provide information literacy instruction. Currently, we are collaborating with multiple disciplines including English, Social Work, CSD, EXNS, Biology, History, Education, Art, and Music. The students in this photo, from Dr. Mwenja's English 103 class, are participating a library scavenger hunt. We can customize the delivery of the instruction to meet your needs by offering sessions in the EBSCO room, your classroom, Zoom, or pre-recorded video. Faculty who would like to request library instruction are invited to complete the Request Library Instruction form. 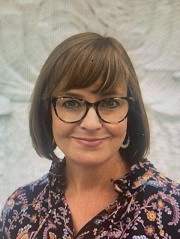 Susan Zana joined the library team in August 2022 as an adjunct Reference and Instruction Librarian. She earned her Bachelor's degree from Auburn, her Master's degree from Alabama, and her Specialist degree here at Montevallo. Her background as a high school English teacher and school librarian have prepared her especially well to provide information literacy instruction and research assistance when working with English 101 and 102 students. As a graduate student, she relied on Carmichael Library's excellent library resources and is happy to share these resources with UM students. Originally from New Orleans, Susan is married to Mike, and they have an American Staffordshire Terrier named Foxy. Like most librarians, she also has cats.

Letter from the Director

The academic year is off to a great start at Montevallo, as we finally seem to be emerging from the pandemic cloud. The front of the library got a "facelift" over the summer, with new doors and windows and a remodeled entrance, and we're thrilled to have new LED lights on two floors of the building as well. When classes began on August 22, we felt ready for a new beginning!

This fall, as you make your way through the usual groups of people (or individuals) studying or working on projects in Carmichael Library, be on the lookout for some special displays and events as well. In addition to library displays (such as those for Banned Books Week or Hispanic Heritage month), you can appreciate the work of some of UM's talented student artists in the Student Art Association exhibit (through Oct. 12) followed by the Digital Ceramics show (through Nov. 18). Exciting events on the calendar include poetry readings on September 26 and November 15, the Faculty Research and Teaching Symposium on October 12, and an artist talk on November 14. And if you feel like staying up late, the ground floor is now open overnight, Sunday through Wednesday nights. Come visit us soon - and stay for a while!

The library is integrated with Google Scholar, meaning you will see "Full-text UM" links for articles from the library. On campus, this feature is automatic. For off-campus access, follow these instructions. Also, if there is an article we don't have access to, click the arrows (>>) under the article information, then "Full-text". On the next screen, click "Request through Interlibrary Loan".

PubMed is also now connected to library resources. To access these features, you must use UM's custom PubMed address. Once on the site, simply click on the article from the search results, then look for the "Search UM Library" button. This will initiate a search that will result in either a link to full text (if we have it) or a link to request it through ILL (if we don't have it).

We are excited to announce some new library subscriptions that will be available soon: ScienceDirect (College Ed., Social & Behavioral Science Journals Collection) and additional JSTOR content. And, our new New York Times subscription is active. Follow these instructions to register for an account! 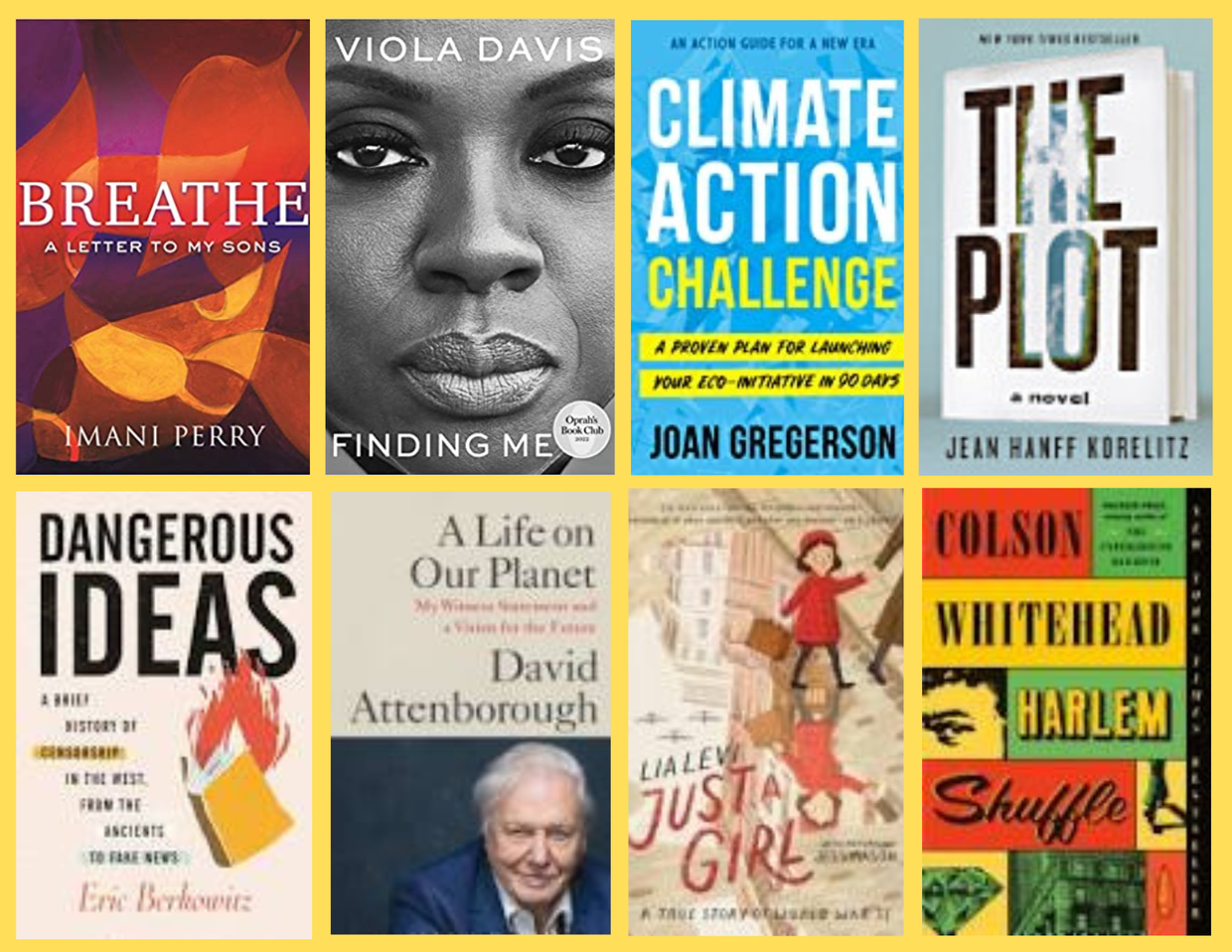 1. Breathe: A Letter to My Sons by Imani Perry

2. Finding Me by Viola Davis

4. The Plot by Jean Hanff Korelitz

5. Dangerous Ideas: A Brief History of Censorship in the West from the Ancients to Fake News by Eric Berkowitz

6. A Life on Our Planet by David Attenborough 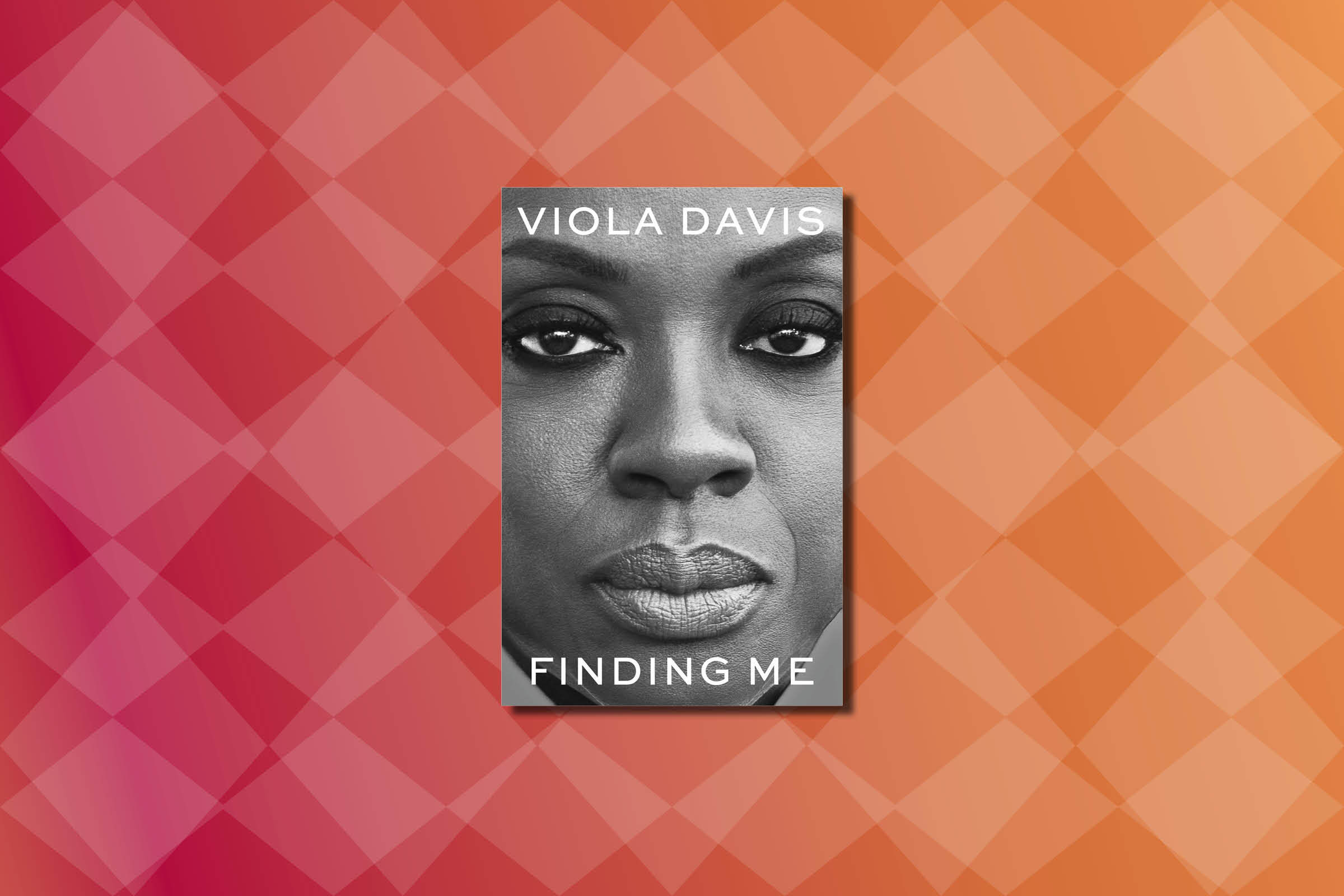 time.com
To read Davis' memoir is to understand just how hard this spectacular performer has worked to build the career and life she has today.

New DVDs to Check Out 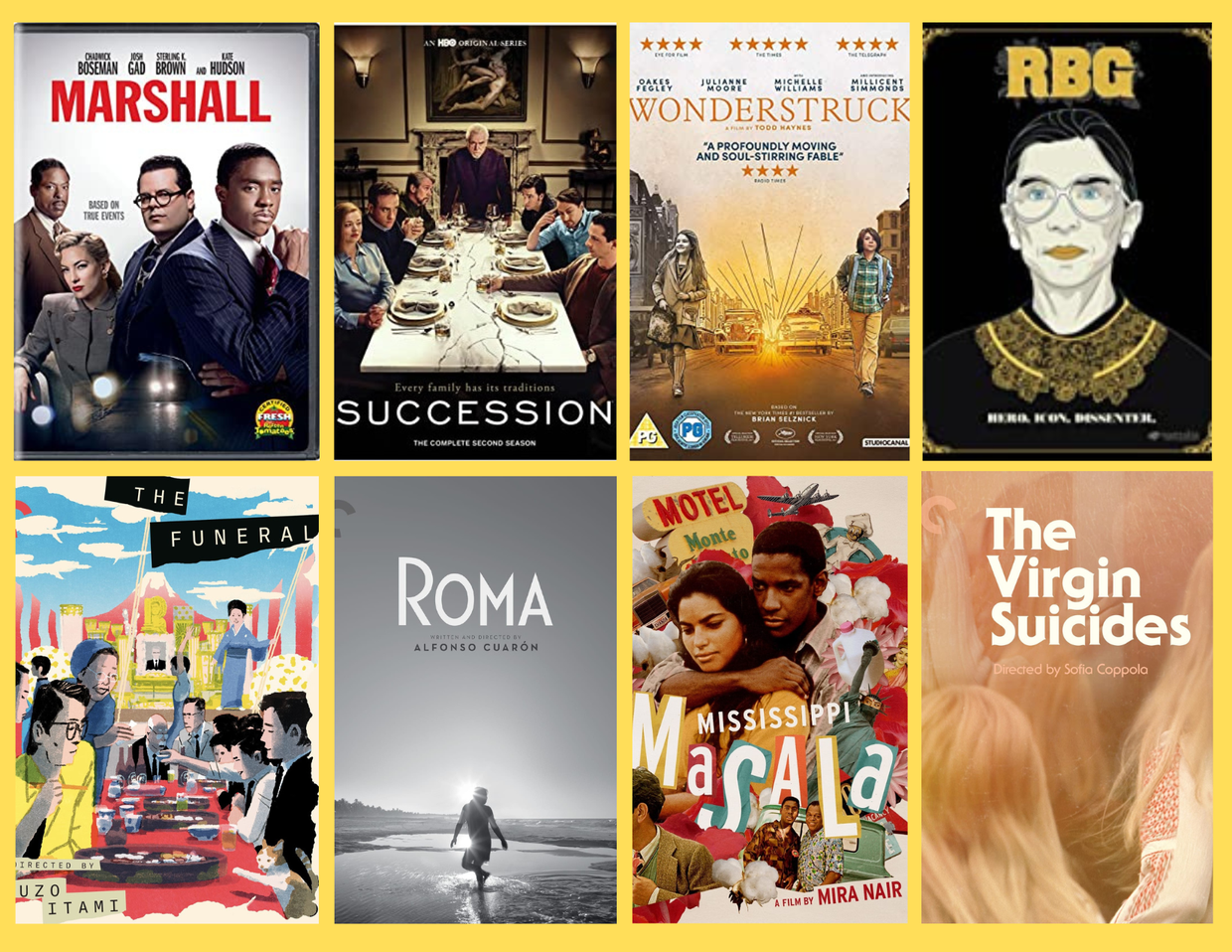 5. The Funeral directed by Uzo Itami (The Criterion Collection)

8. The Virgin Suicides directed by Sofia Coppola (The Criterion Collection)

www.rogerebert.com
It's a masterful achievement in filmmaking as an empathy machine, a way for us to spend time in a place, in an era, and with characters that we never would otherwise.

Throughout the year, the library features displays to coordinate with various events and observations. For example, in recognition of Banned Books Week (September 18-24), the library curated a display of materials and resources that can be viewed online or on the first floor lobby. Be on the lookout for information, in the library and Vallo Voice, about other displays this year. 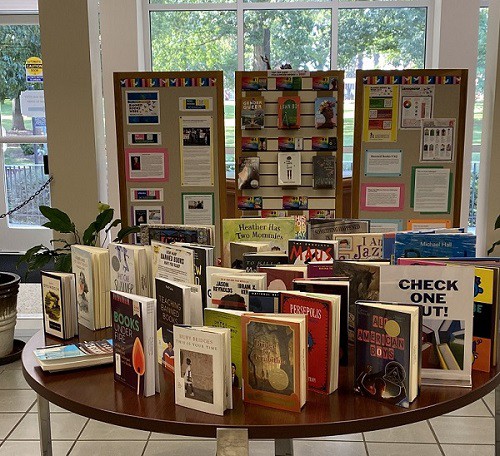 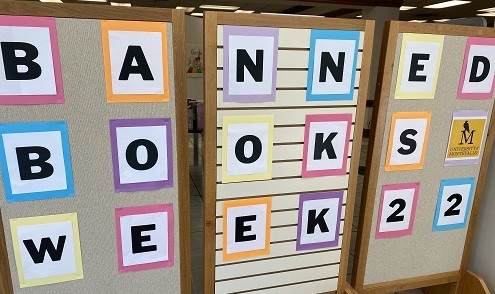 News from the Digital Media Lab

News from the Archives 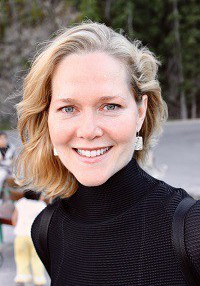 Rebecca Luker, who graduated from the University of Montevallo in 1984, enjoyed a lengthy and distinguished career as a virtuoso actress, concert soloist and recording artist. Her operatic soprano voice led to her starring in nine Broadway musicals, and she was nominated for three Tony Awards. Her work included performances in Phantom of the Opera, The Secret Garden, Showboat, The Sound of Music, The Music Man, and Mary Poppins. She also appeared in a number of television acting roles including Law and Order, Special Victims Unit, and The Good Wife. In addition, she enjoyed teaching master classes and coaching up-and-coming performers.

A vocal performance major, Luker was previously awarded an honorary doctorate from UM and remained actively involved with UM throughout her life. To honor Luker's memory following her passing in 2020, the University of Montevallo named the stage of its new Center for the Arts after her. In addition, a digital archive of tributes to Rebecca by co-performers and friends has been created, edited, and donated to the University. New York theater writer Sarah Rebell spearheaded the project by recording interviews over Zoom during the height of the Covid pandemic. Over eighty of these oral history transcripts can be found on the Rebecca Luker Oral History Project page of the Archives website. More content will be added in the coming months.

Did you notice our new doors (and book drop)?

Over the summer, the library had new front doors installed. And, due to the new doors and thanks to a generous donor, we now have a new book drop. Watch this video to learn more!
In Plain Sight: New Doors & Book Drop 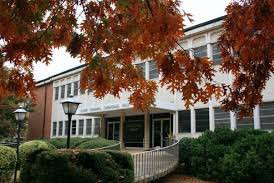 Facebook @umlibrary
75 College Drive, Montevallo, AL, USA library@montevallo.edu 2056656100 libguides.montevallo.edu
Embed code is for website/blog and not email. To embed your newsletter in a Mass Notification System, click HERE to see how or reach out to support@smore.com
close
Powered by Smore
Powered by Smore