Tonatiuh is using Smore newsletters to spread the word online.

Get email updates from Tonatiuh:

it's the largest lagoon in US!

it's the largest lagoon in US!

Location of this Estuary

The location of the Pamlico Sound is in North Carolina within the southern Outer Banks, along the Northern American East Coast. The Estuary is separated from the Atlantic Ocean by the Outer banks, there are a low line of sand barrier island that help separate the estuary from the ocean.

Why are estuaries important?

Plants and animals that live in Estuaries

Some of the animals that live in estuaries for food, water, and shelter are seahorses, blue crabs, mud crabs, fish, shellfish, and also migratory birds, etc. The Plants that grow in estuaries are Smooth cordgrass, seagrass, spike grass, purple loosestrife, and aquatic plants, etc.

What are some river, streams, or waterways in Pamlico Sound?

The rivers that are close to my estuary are the Neuse, Chowan, Roanoke, and the Pasquotank are the five major rivers that are in or near Pamlico sound. There are seven sound that make up all the estuaries and they are the Albemarle, Currituck, Croatan, Pamlico, Bogue, Core, and the Roanoke sounds.

what are the threats that the Pamlico Sound get?

One threat to the Pamlico sound is that their is too much nutrients in the water and that's caused by the fertilizer in lawns and fields; when it rains on the lawn that was just fertilized it goes into the estuary and cause a disturbance of algae growing. if too much algae grows then the plants that grow under the water block sunlight from the plants. When people pesticides on there lawn or field it goes to the estuary and that's putting toxic material in the water killing fish. Other threats are Erosion, sedimentation, and habit loss. 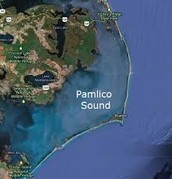 Sources for the information and pictures

Tonatiuh is using Smore newsletters to spread the word online.