The True Discoverer of America

The True Discoverer of America

Well first off I would like to say that there is no case for any of the other Explorers in who discovered America. I say this because there is evidence sayng Native Americans are the first true discoveres of America, they came here 10,000-50,000 years ago. And if that isn't enough evidence already they watched and greeted the other explorers when they came sailing towards America meaning that they were already on the land before anyone else and that is guaranteed proof that they were there first. So basically all of the other explorers are frauds because we were there 10,000-50,000 years before anyone else. 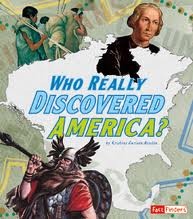 Why each explorer doesn't deserve credit except the Native Americans

Yes Leif did explore some of the New World but We were there first and according to Samuel Mosrison the Vikings do not have any proof of their voyages because there are no Irish artifacts. And Bjarni didn't even get out of his boat when exploring

It is unfair to the Native Americans that Christopher Columbus gets credit for discovering America. I mean Columbus basically came to America and killed a bunch of native people and then claimed the land as his ownand yet today we give him credit for dicovering America and we consider it a national holiday. In my opinion we shoukd not have Columbus day because it is really a lie of a holiday. I actually found and signed a petition to have Columbus Day changed to http://www.change.org/petitions/native-american-warriors-abolish-christopher-columbus-day. I really think people should sign this because if it gets 100,000 signatures the president has to look it over and it would also make history right. But in reality Columbus was at leat 10,000 years behind the Native Americans in discovering America and is still given credit for discovering America.

Who Discovered America? Not Christopher Columbus, That's for Certain

voices.yahoo.com
As often happens on Columbus Day, a federal holiday in the United States celebrated annually on the second Monday of October in honor of Christopher Columbus, the question arises: Who discovered America?
Loading form...

Follow Jake Gascho
Contact Jake Gascho
Embed code is for website/blog and not email. To embed your newsletter in a Mass Notification System, click HERE to see how or reach out to support@smore.com
close