Information from the Attendance Office

If your student has accumulated over 10 absences in one or more periods this school year documentation is needed to excuse this absence. i.e. Dr. note, college visit, court papers, etc. The student will be marked with an A=Absent. Once documentation is given to the Attendance Office the A=Absent will be changed to an E=Excused. A=Absent will still generate a robo call to the home each evening.

Enrollment for the 2019-2020 School Year Begins in January

Enrollment for the 2019-2020 school year will begin in January. Counselors will talk to their Alpha grade level students during Seminars and give them their Course Request Cards and Course Listing Sheets at this time.

Each Counselor will be in a specific location – listed below:

A – D w/Holloway will be in the Auditorium

E – K w/Murray will be in the Little Theater

L – Q w/Miller will be in the Cafeteria

R – Z w/Griffey will be in the Learning Commons

The dates for these presentations during Seminar are:

Students will have one week to talk to their parents and make their decisions about course choices. Counselors will be sitting at tables in the ELA hallways and will “pull” students from their ELA grade level classes during Wednesday and Thursday block days.

We will be at Hocker Grove Middle School on Friday, January 11th (all day) to present the enrollment information and give them their enrollment paperwork.

Northern Exposure will be on Wednesday, January 16 at 6:00 pm here at North. The 8th grade students and their parents are invited to attend this event to learn about the various high school academics, clubs and athletic opportunities.

Counselors will return to Hocker on Friday, January 18th to meet with each 8th grade student individually and collect their Course Request cards. 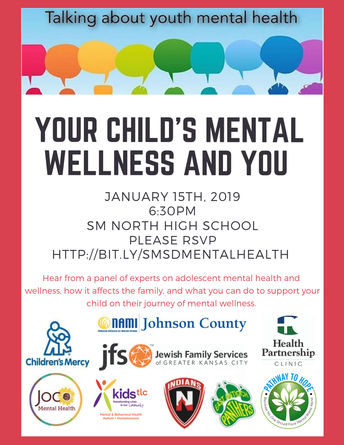 For our next parent information night, on January 15th at 6:30 at North High School, we will be hosting a panel of representatives from Pathways to Hope, Health Partnership Clinic, JCMH , NAMI, Jewish Family Services, and Children’s Mercy. This informational panel will be moderated by Ann Konz, board member of NAMI and local mental health advocate. The goal for this parent night is to not only have the presenters speak on mental health and wellness as it relates to students and families, but also expose parents/families to all the resources available in our community.

Save the Date- Trivia Night for the Tribe

The 5th Annual SMN "Trivia Night for the Tribe" will be held on Saturday, January 19th, 6:30pm at St. Pius Church in Mission This event is co-sponsored by the SMN PTSA and the SMN Booster Club. Save the date and start getting your team of eight together today! Or, you can sign up as an individual and we will place you on a team where space is available.

If you haven't heard.... "Trivia Night for the Tribe" is a fun night full of trivia, prizes (Best Table Decorations, Best Team Theme/Costumes) and a huge prize raffle. Cost for this adults-only evening is $30.00 per person/$240 to reserve your table if you sign up prior to the deadline. And, if you sign up as a table, you can designate $100 of your registration to go to the SMN club, group or team of your choice!

Coaches and sponsors, please consider pushing this info out to your parents and ask them to designate YOUR group or team.

Space is limited so get your table reservation in ASAP. Proceeds go to support SMN students!

For information, contact SMN PTSA at smnorthptsa@gmail.com or SMN Booster Club at smnboosterclub@yahoo.com.

We are excited for our 5th annual event and really hope to see you and your team there!

*tables will be secured for a team once money is turned in.

Spring is just around the corner, start preparing for spring TODAY! The spring College Now schedule of classes is now available. Students can access the College Now class schedule by going to jccc.edu, selecting the Classes link at the top of the page, then selecting High School College Now Classes from the dropdown menu.

Please share the attached College Now Enrollment Guide for High School Students with your students, parents and College Now faculty. Check out the College Now website with FAQ’s to answer all your questions.

Enrollment Reminder Letters –
Each fall semester, we send letters to students who enrolled in a fall course that has a subsequent spring course. (Example: History to 1877 in the fall and History since 1877 in the spring.) These recommendations are to alert students that a sequential spring course is available. Students are advised to contact their high school counselor or instructor for more information.

Indians Reaching Out to the Community.pdf 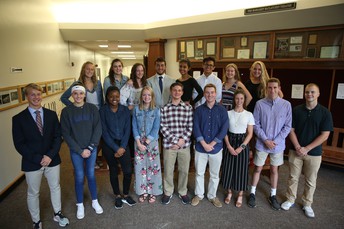 The Matchmaker surveys have been completed, and you can buy results for $2 at lunch on January 22nd, 23rd, and 25th.

Kindness week is coming up, Jan 28th- Feb 1st! Get ready for some random acts of kindness!

WPA is on February 2nd from 8-11pm in the Fieldhouse. The theme is Disco!

SMN will host the first Teen Trivia Night for North students. The event will be held in the Learning Commons on Tuesday, January 22, from 3:30 to 6:30 pm. We will have food, games, nostalgic movies, and more. Each student needs a canned food item to enter the event. The canned food items will be used to help families in need. Students can form teams based on clubs/organizations they belong to or form an independent team of four to six players.Team themes are welcome.

twitter.com
The latest Tweets from SMN Mission Paper (@TheMissionPaper). Shawnee Mission North's student-run magazine with updates and information regarding everything at SMN. The Mission publication's advisor is Mrs. Becky Tate 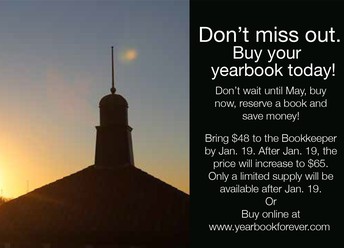 Prices will be going up, on 2019 yearbooks soon, so purchase yours now.

If you haven’t purchased a 2019 Yearbook, they can still be purchased through the bookkeeper in the main office or at www.yearbookforever.com through Jan. 19, 2019. Cost is $48 if purchased at school.

The money ($48) or a check made out to SM North, can be taken to the bookkeeper by January 19. If you would like to pay with a credit card, payment can be made at www.yearbookforever.com. Choose Shawnee Mission North. There is a $2 service fee if you choose to pay online.

Shawnee Mission North’s Hall of Fame will grow by three exceptional inductees. On Friday, February 1st, at halftime of the boys’ basketball game (approximately 7:45 pm), Gene Elstun (posthumously), Jennifer True Roth and Robin Williams-Gray will be introduced as the newest members of the class of 2018-19.

The winter sports season is in full swing and our student-athletes will be super busy in the stretch run of January and February. The varsity boys’ basketball team has lost some tough match-ups and stands 2-5. The girl’s team continues to improve and their current record stands at 0-8. Both teams are in action versus Lawrence on Friday, January 11 and the girls play Washburn Rural on Monday evening and the boys play at KC Northeast on Tuesday. Both teams compete in tournaments as the boys travel to Nixa, MO and the girls compete in the Emporia Classic, January 17-19.

The SMN swimming team has had some outstanding individual and team accomplishments. Trey Smith captured the school record in the 100 butterfly in 52.82 seconds; and placed 2nd overall at the Olathe South Invitation; Caleb Sostraich qualified for state in the 100 breaststroke as well; and the team finished in 10th place out of 17 teams. As of today, all three relays have met qualifying times for state. The team would love to see you at the pool on Thursday afternoon when they travel to SM West

The wrestling team competed in the Derby invitational this past weekend. The team is dealing with a number of injuries and looks to make a strong push second semester. Next action for the grapplers is Friday, January 18 at the Desoto Classic. Mark your calendars for the SMN Varsity Wrestling Invite scheduled for Saturday, January 26.

The Bowling teams schedule kicks-off on Thursday afternoon as they compete in the Desoto tournament at Park Lanes and host on SMN quad at Mission Bowl on Wednesday, January 16.

The Topeka Capital-Journal in conjunction with GateHouse Kansas media will be holding the second annual event this June and have selected Asher Molina, Boys Cross Country as our distinguished student-athlete to represent Shawnee Mission North. Asher and his parents will attend a banquet in May for this prestigious event.

The deadline to turn in forms to the athletic office for spring 2019 sports is Friday, February 18, 2019. Any athlete turning in forms on Monday, February 25, 2019 risks their opportunity to participate that day.

Requirements to tryout and participate are:

Ø A completed KSHSAA Pre-Participation Physical Exam (PPE) Revision of the form; earlier versions of the form will not be accepted.

Ø The physical examination date must be May 1, 2018 or after and signed by a medical professional.

Ø Parent consent must be completed and signed.

Ø For 2018-2019, the concussion form will need to be in paper form and signed. It will not be included in the online forms.

Ø The 2018-19 High School Athletic Packet, completed by both parent or guardian and athlete in Skyward.