When living in the 1920's I was a physics scientist also a teacher. I won the Nobel prize for physics with my buddy Chaim Weizman. Although growing up was a lot of work because of my German background, I could barely speak full and smooth English. It was had being from Germany because there was so much nativism from people. I learn to face the fact that people will be like that to mean though and you just giot to get over that fact. My favorite thing about the 1920's was being able to know so much more about physics. I pretty well know for all my science but people also need to know that I have but I prefer to be a Scientist. I won the noble prize-physics which like you read before which was a big part of my life time. I was also know for finding some of the water moncoles you may know. Well I had an impact but I'm pretty sure not as much as I did in the 1920's because I did help with machines and also some stuff in world war l. I think I am mostly remember by the fact that I was German that turned out to help America with science ans machines. Mostly what based based my life was, with the help of some people and I (Albert Einstein) found suspended consists of atoms and molecules and winning the prize of physics and math but didn't win a prize for that.

10 Things You Didn't Know About Albert Einstein
How old was Albert when he died? 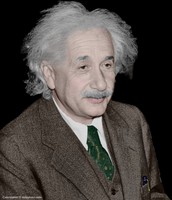 Here is a picture of him working his amazing hair style fun fact is that he loved math!

The man with all the answers! 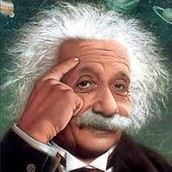 JUst remember thinking is where it all starts!