Ricardo is using Smore newsletters to spread the word online.

Get email updates from Ricardo: 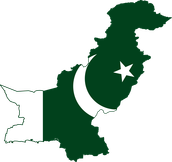 Pakistan is highly dependent on foreign aid to bolster its overstretched, poorly planned infrastructure. Pakistan is considered a low-income country by the World Bank, their per-capita gross domestic product is only about $450. The country's lack of social services and high population growth have exacerbated poverty and unequal income distribution.

The government of Pakistan is a federal government established by the constitution of Pakistan. The full name of the country is The Islamic Republic Of Pakistan. There is an independent judicial branch of government. Administratively, the country is divided into four provinces and two territories. Pakistan has swung between democratic and unelected authoritarian leaders for decades. The army remains a major force in Pakistani Politics, and the country has been ruled by the military for half of its 60 year history as an independent.

Almost all of Pakistan is Islamic and most of the people adherents of the sunni sect, but Pakistan is also home to other religions including Christianity and Hinduism. Islam is practiced about 85% of the 195,343,000 people in Pakistan. The remaining about 15% practice Christianity, Hinduism, and other religions.

The county borders Afghanistan to the north west, Iran to the west, india to the east, and china to the north. The scorched desert provinces of Sind and Baluchistan can experience temperature of more than 120F, while on the northern mountains sink into below zero. The east and south of Pakistan is flooding every year. The country experience the one of the worst monsoons and flooding seasons in Pakistan history. This flood displayed more than 20 million people in Pakistan and triggering an estimated death of 13,000 or 16,000.

The society and culture of Pakistan comprises numerous ethnic groups: the Punjabis, Kashmiris, Sindhis in east, Muhajirs, Makrani in the south; Baloch, Hazaras and Pashtun in the west and the ancient Dardic, Wakhi, Baltistani and Burusho communities in the north. Pakistan's national language is Urdu, however, it is also home to other languages including Punjabi, Pashto, Sindhi, Balochi, Kashmiri, hindko, Brahui, Shina, Balti, Khowar, Dhatki, Marwari, Wakhi and Burushaski.

Ricardo is using Smore newsletters to spread the word online.

Follow Ricardo Palacios
Contact Ricardo Palacios
Embed code is for website/blog and not email. To embed your newsletter in your email, click HERE to see how or reach out to support@smore.com