shawkat is using Smore newsletters to spread the word online.

Get email updates from shawkat: 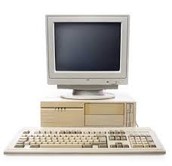 After 1971 the fourth generation computers were built and it was the extension of the third generation. It was an faster more reliable and more powerful. Also compatible and more affordable also it was made in thousand chips inside which made the computer do many things such as storing data recent activity and was created by William Shockley. The fourth generation which was called (PC) and also has input and output devices.

shawkat is using Smore newsletters to spread the word online.