Mikeisha is using Smore newsletters to spread the word online.

Get email updates from Mikeisha:

Blacks had a struggle in society and will overcome!!!!!!!!!

Blacks had a struggle in society and will overcome!!!!!!!!!

King speech proves that the rights in society was very separated. What he really wanted was for everyone to be together and to join hands. He seen that blacks had a lot of unspeakable violence dealing with police they also did not have rights that protected them. Whites did not notice their struggle was very similar to blacks struggle and the constitution helped try and bring everyone together and be guaranteed the same unalienable rights and liberty. The American dream is partly for blacks being deeply rooted to be treated equally. America is too good of a nation to not have liberty and freedom for everyone.

This picture explains when in his speech King stated, "We cannot walk alone. And as we walk we must make the pledge that we shall always march ahead. We cannot turn back."

The Valley of Suffering

By the look of this image it explains what King meant when he said, "One hundred years later the Negro is still languished in the corners of American society and finds himself in exile in his own land." At the time before black didn't have equal rights all of these words was how they felt based on how they all were treated against whites.

This picture explains that King believes, "When the architects of our Republic wrote the magnificent words of the Constitution and the Declaration of Independence they were signing a promissory note to which EVERY American was to fall heir." This picture shows blacks and whites united to hear Martin Luther King Jr. speech together.

Everyone has a dream not just Martin Luther King. In the song below it shows how no freedom and justice for blacks not just affect the past but it also affects the present and future negatively. Our society seems not to change much but just enough to satisfy the majority of the nation.
I HAVE A DREAM-common ft. Will.I.Am LYRICS (Freedom writers)

Try to work it out Together

This song shows a perfect example of how freedom and justice affect the present and future. One of the dreams King had was "I have a dream that one day this nation will rise up, live out the true meaning of its creed: "We hold these truths to be self-evident, that all men are created equal." In my point of view I believe that this dream from MLK mostly became true but not really because people cannot make their own rules in some places in the world only the nation can make the rules.

I have a dream

This picture shows how many people came and supported to make a change in the world.

American people believed that Martin Luther King Jr. made a change and keep the American Dream and made it better. 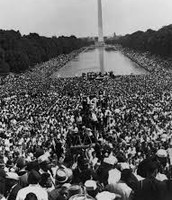 This picture shows how many people are thinking of the American nation as a whole that needs to be changed for everyone to be treated fairly.
Martin Luther King - I Have A Dream Speech - August 28, 1963 (Full Speech) 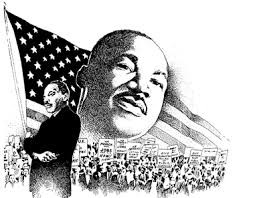 Mikeisha is using Smore newsletters to spread the word online.