Narrative of the Life of Frederick Douglass, an American Slave

"Here, too, the slaves of all the other farms received their monthly allowance of food, and their yearly clothing. The men and women slaves received, as their monthly allowance of food, eight pounds of pork, or its equivalent in fish, and one bushel of corn meal. Their yearly clothing consisted of two coarse linen shirts, one pair of linen trousers, like the shirts, one jacket, one pair of trousers for winter, made of coarse negro cloth, one pair of stockings, and one pair of shoes; the whole of which could not have cost more than seven dollars."

I chose this because Fredrick Douglass went through slavery and was able to escape to freedom. Fredrick went through so many different experiences and has done amazing things. He wrote this to inform people of the things slaves have to go through. Also he wanted to share his story with anyone who is willing to read it. If you read this you will truly see what life was like for a slave. 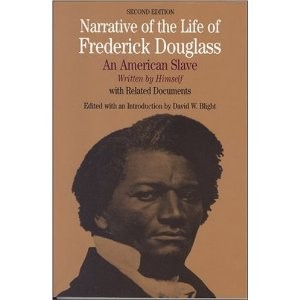