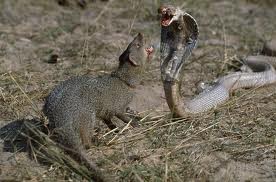 An Indian Grey Mongoose fights an Indian Cobra in the grass of a scrub plain.

In the world renowned child book, The Jungle Book, the mongoose named Rikki Tikki Tavi is an Indian Grey Mongoose.

The Indian Grey Mongoose, also known as herpestes edwardsii or the common mongoose, is a small carnivore with a long, bushy tail, short legs and sharp claws. They have long noses and short, round ears. Their coat is long and coarse and is a light grey color, but individual hairs are white and black making them look like a small grizzly bear. The male is slightly larger than the female.

The Indian Grey Mongoose is a diurnal animal. It sleeps in the night and is awake in the daytime. This animal is an omnivore. They eat insects, spiders, scorpions, and other invertebrate, as well as frogs, lizards, rodents, and snakes. They also eat some vegetables and fruits, and eat refuse and carrion, or the leftovers of other animals. They are known as killers of venomous snakes, such as the Indian Cobra, because they are very agile and avoid being bitten by the snakes before killing them.

On average, the female produces 2-4 pups per litter with 3-4 litters per year. The Indian Grey Mongoose lives in Iran, Afghanistan, Pakistan, India, Nepal, and Sri Lanka. This animal lives in thorn forests and secondary forests (forests that are regrown after a major disturbance such as a fire or timber harvest). They also live in open areas, such as scrub and cultivated land. They almost always are found near human settlements. The Indian Grey Mongoose lives in tree hollows, holes in the ground, and rock crevices.

The Indian Grey Mongoose was introduced in Japan and Malaysia to prevent overpopulation of snakes and rats. 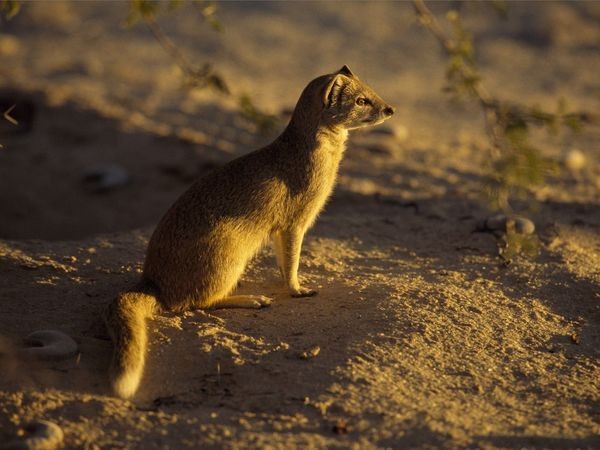 An Indian Grey Mongoose watches his surroundings intently as the sun rises in a plain in eastern India.

The Website of Everything. "Indian Grey Mongoose - A Ruthless Cobra Killer" thewebsiteofeverything.com.

Follow J Kline
Contact J Kline
Embed code is for website/blog and not email. To embed your newsletter in a Mass Notification System, click HERE to see how or reach out to support@smore.com
close