Zachery is using Smore newsletters to spread the word online.

Get email updates from Zachery: 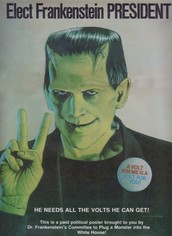 In this book the Frankenstein it shows us the struggles of just coming into this life as someone who has no knowledge of the surroundings and how the creature wanted a freind. also how he wanted to feel some sort of responsibility.

"I sought my own apartment. I was alone; none were near me to dissipate the gloom and relieve me from the sickening oppression of the most terrible reveries". Chapter 20

he had found his own living area and confinement he felt depressed and alone. he wanted someone to keep him company.

"I thank you, but all that you mention is nothing to me; on the whole earth there is no comfort which I am capable of receiving." Chapter 21

he is saying that he has no one and is alone, he will not receive any comfort from anyone.

"I sought my own apartment. I was alone; none were near me to dissipate the gloom and relieve me from the sickening oppression of the most terrible reveries". Chapter 20

"'No; but I was educated by a French family and understand that language only. I am now going to claim the protection of some friends, whom I sincerely love, and of whose favour I have some hopes.' Chapter 15

the creature had learned about things because they thought him . he helped them and they help him.

"Begone! I do break my promise; never will I create another like yourself, equal in deformity and wickedness." Chapter 20

victor is telling the creature that he will not make another creature because he in the first place shouldn't have ever done that.

"I am not mad," I cried energetically; "the sun and the heavens, who have viewed my operations, can bear witness of my truth. I am the assassin of those most innocent victims; they died by my machinations. A thousand times would I have shed my own blood, drop by drop, to have saved their lives; but I could not, my father, indeed I could not sacrifice the whole human race." Chapter 21

the creature is telling us how he really misses his father victor.

"I replied in the same language, with a feeble voice, "I believe I am; but if it be all true, if indeed I did not dream, I am sorry that I am still alive to feel this misery and horror." Chapter 21

In today's life in high school kids need someones acceptance and friendship to go through school years. but when you are not popular and don't have many friends you feel alone , like the creature is now with out anybody. this connects to today's life, if you don't have any friends because you are not liked you are alone through out school.

Zachery is using Smore newsletters to spread the word online.