I am so glad that the second semester has started! We are going to be doing a lot this semester and I am super excited! We are all going to be taking the National Latin Exam the second week of March. It is a national exam that will give you the opportunity to test your Latin skills against thousands of students around the country to win medals and certificates (and sometimes even money!!) AND give you practice for the SLO at the end of the year! Other upcoming events are the Rome Trip Interest Meeting and State Convention!

The cost for convention is $130 and the money is due to me NO LATER THAN March 9, 2016, because I have to send it off to the state. It is imperative that you reserve your spot as early as possible, because there is limited space and I don't want you to get denied because they ran out of beds.

The convention website for 2016 will be published on February 1, 2016. Last years website is still up and has much of the same information. The 2015 FAX (Convention Handbook) has very important and useful information about convention, what happens, what you can win(lots and lots of medals, ribbons, and certificates- GREAT for college applications and job applications), and what you get.
http://gjcl.org/statecon.html

State Convention is one of the most fun things you can do in high school! It is a weekend hanging out and competing with 1100 other high schoolers from around Georgia who all take Latin! If you have any questions, please ask me or a Latin II student who has been before!
GJCL Latin Convention 2013
2015 GJCL State Convention Prep!

If you are interested in attending the Rome Study Abroad Trip on October break 2017, come to this interest meeting! There will be representatives from EF (the tour company) there as well!!
Get Directions

Certamen is Latin Quizbowl! I really would love for NCCA to be represented at these state level tournaments! There are traditionally 2-4 people on a team. I have study materials if you would like to play and if we get some teams, we can practice after school sometime with buzzers!! Here are the tournament dates: 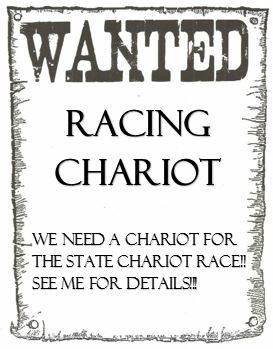