Contained In This Newsletter 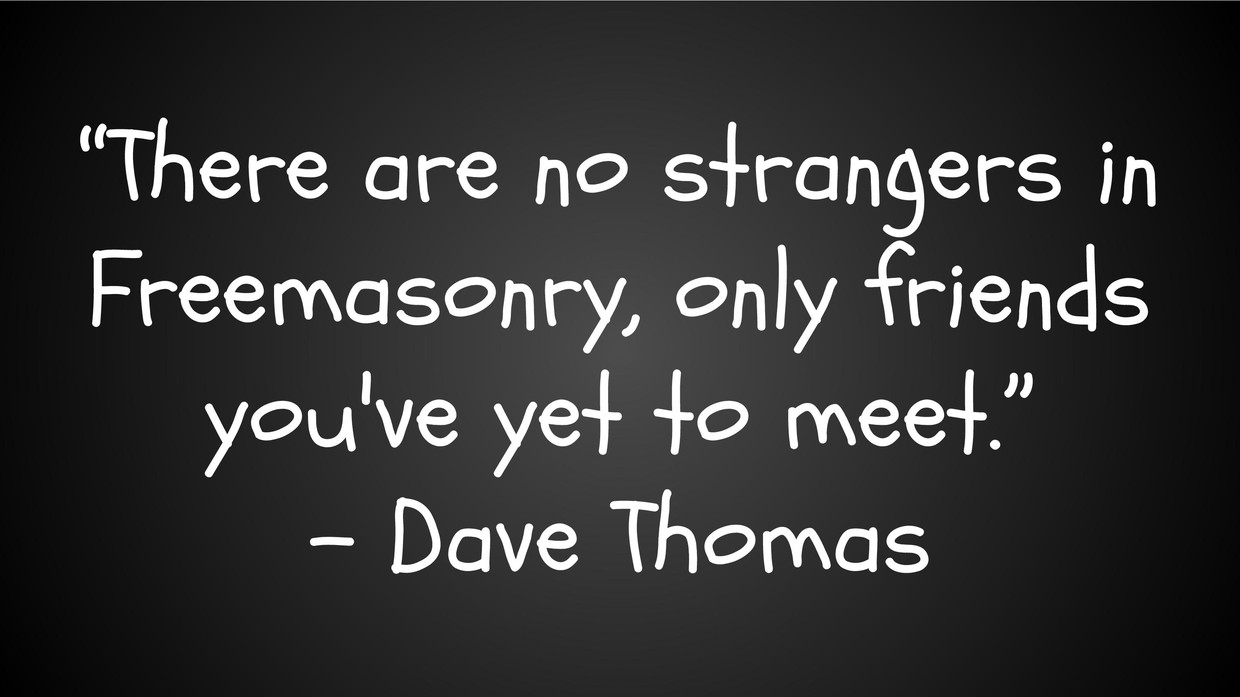 I hope this correspondence finds each of you well. We have many positive happenings within District #108 and our great MWSA establishment. I have not witnessed such energy, passion, and hope for the organization in the few years I have been involved in it. This is due to each one of you and the leadership that I am honored to serve with. In the coming days, we will be distributing the MWSA #108 Strategic Plan and I encourage all to read it and be a part of our success. Remember, it is only a plan and can be successful only through successful implementation of its various actions.

I am working with the elected leadership of MWSA #108 in the development of an education program that will be offered to the membership. This program will be customizable and is intended to be actionable by which each of us can take the lessons learned and implement them within our various lodges. I have no doubt that Vice President Berndt will make us all proud and better equipped to pass our investment forward to tomorrow’s leaders. Also, of importance is our goal to be recognized by the GLOT as a relevant organization. Our goal is to complete this process by June.

On January 19 I was installed as the District Deputy Grand Master for Masonic District #108. Let it be known that I do not believe this to be an award. But rather a duty that I will take very seriously and will attempt to be the best that I can be. This masonic year is not about me, but about each of you and your honorable Lodges. Obviously, I have received good counsel from our two previous DDGM’s, e.g., Brother Davis and Brother Tyksinski, 2017 and 2018, respectively. I am humbled to follow these great men. I am satisfied to have followed my father’s footsteps as he was the DDGM of Masonic District #49 from 12/08/1990 to 12/07/1991.

It was so good to see so many of you at Grand Lodge this year. For those that did attend, I encourage you to communicate to your Lodges the Resolutions that were passed. A few were very significant, and I believe truly benefit our Grand Lodge. The Grand Master’s Recommendation was passed (thankfully) and we elected a young and vibrant man to the Grand South. I believe we are at the brink of witnessing a very positive change at Grand Lodge. Exciting times.

Within the month of February, I will communicate my official visit schedule to the District Worshipful Masters and Secretaries. I hope to see many of you at the various Stated Meetings.

On January 25, 2019, Morton Lodge No. 72 of Richmond, Texas participated in a historical event to honor the second President of the Republic of Texas, Mirabeau Buonaparte Lamar. In an event led by the local chapters of the Daughters of the Republic, Sons of the Republic, and the Fort Bend County Historical Commission, Mayor Evalyn W. Moore proclaimed January 25 as Lamar Day. Other organizations active in the event comprised of more than 100 people included VFW Post 3093, Lamar Consolidated Independent School District, Morton Cemetery Association and the Texas Army.

Cody Matthew Cockroft, Past Master of Morton Lodge No. 72 and District Deputy Grand Master of Masonic District No. 108 presented a speech on behalf of all Masons in Texas and presented the Lamar Medal to the president of the Fort Bend Historical Commission and provided a context of the medal to the audience.

In addition to the event Morton Lodge No. 72 organized a photo shoot for the Masons in the historical Morton Cemetery (formerly known as the Richmond Masonic Cemetery). The cemetery is named after William Morton, a Freemason from Alabama and one of the earliest settlers of Stephen F. Austin’s “Old 300”. This solemn location was owned and maintained by Morton Lodge No. 72 from 1897 – 1943 and is the resting place of other Texas greats, such as Jane Long, “The Mother of Texas” and the Gillespie Monument.

Cody Cockroft’s speech was recorded and will be made available on YouTube. It can also be found below. Many thanks are attributed to Albert Davis, Past Master of Rosenberg Lodge No. 881 for organizing the event with the Fort Bend County Historical Commission and Anthony Teutsch of Sugar Land Lodge No. 1141 for the photography work.

Mirabeau Buonaparte Lamar, a Freemason and member of Harmony Lodge No. 6 in Galveston, Texas, was a warrior for the Republic of Texas and a visionary for state’s rights and public education. A descendant of French Huguenots who fled Europe to escape persecution, Lamar developed a keen craving for individual freedoms and a passionate distrust of expanding federal powers.

In his home state of Georgia, Lamar briefly attended private academies, but he soon became rebellious against the routine of formal schooling and pursued a life-long quest of coursework in “self-education”. He became an insatiable reader, gifted public speaker, writer, artist, a student of ancient history, and knowledgeable in the liberal arts and sciences.

Soon after the fall of the Alamo, Lamar joined the Texas Army as a private and was later commissioned as a Colonel on the battlefield where he was assigned a Calvary to command during the battle of San Jacinto.

On December 19, 1838 Lamar was inaugurated as the second President of the Republic of Texas. He distinguished himself as the “Father of Texas Education” for his support of a public-school system. In his first public address to the Congress, Lamar declared, “If we desire to establish a republican government upon a broad and permanent basis, it will become our duty to adopt a comprehensive and well-regulated system of mental and moral culture”.

He proposed the set aside of public lands for the creation of a permanent endowment to support public education whereupon Congress supported primary public schools and two colleges: The University of Texas and THE Texas A&M University.

While these acts were important in the establishment of public education in Texas, the lasting impact was in the creation of a permanent endowment for the support of public education and the provisions for teacher certifications (both of which are alive and well today). Furthermore, Texas was the first state to give state aid to education. The “school lands act” of Texas continues to provide for the permanent endowment and support for common education in Texas and supplements the property tax dedicated to the Texas public school system.

In 1988, under the leadership of Graham Childress of the Grand Lodge of Texas, the Lamar Award of Excellence was established. The Lamar medal is awarded to students and educators in recognition of outstanding personal achievement in academics, citizenship and community service. Every year, the Grand Lodge of Texas and its many masonic lodges offers valuable scholarships for Texas’ future leaders. In fact, in 2018, Texas Masons offered over $13M dollars in scholarships to more than 33,000 high school seniors and educators. 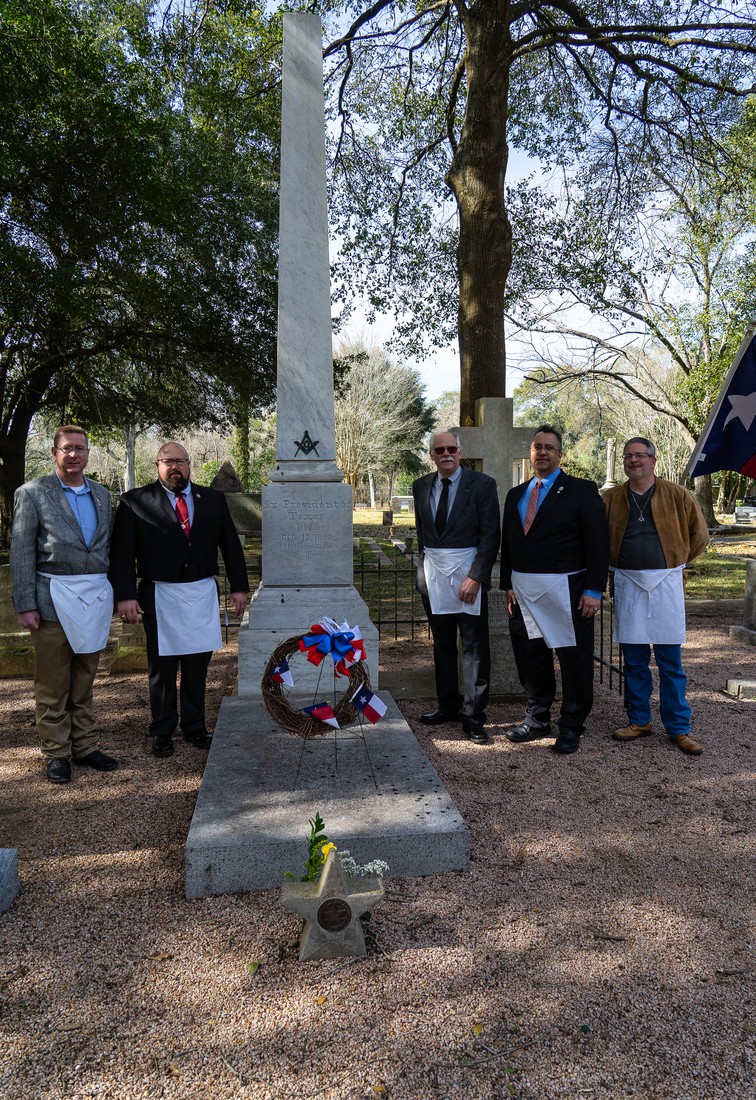 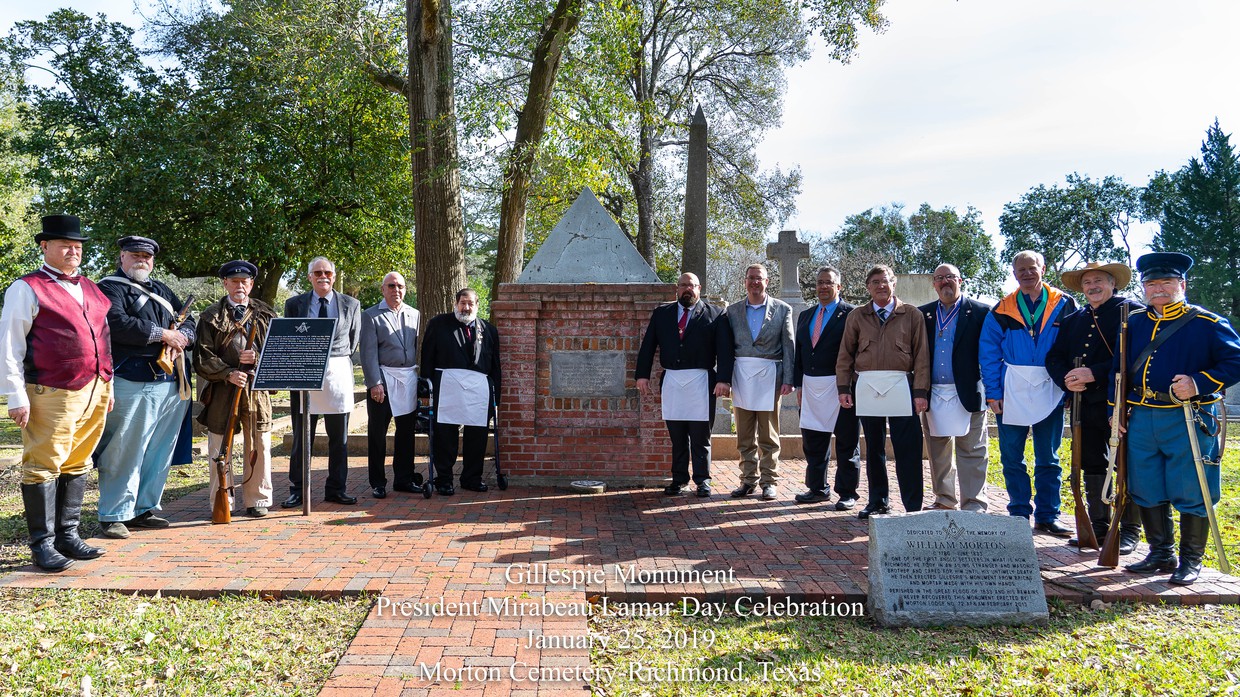 The full Google Calendar for District #108 may be found on the MWSA website, about halfway down the page.

The next business meeting of the District 108 MWSA will be held on Tuesday, April 23, 2019, at Pleasent Hill Lodge #380 located at Schneider Road & FM 1488 in Field's Store, TX. We are working to put together a beneficial and educational agenda. We are also working to have an education meeting prior to April. We will keep you up-to-date as details are set.

This section will be used to communicate Right Worshipful Cockroft's traveling schedule. Please note that this will not include various area and District Lodge degrees/events.

If you would like an expertly smoked brisket to enjoy during the Super Bowl, please contact Brother Robert Disney, who's phone number may be found on the flyer below. Sugar Land Lodge is selling these briskets (either full or 1/2) to raise money for their charitable causes. 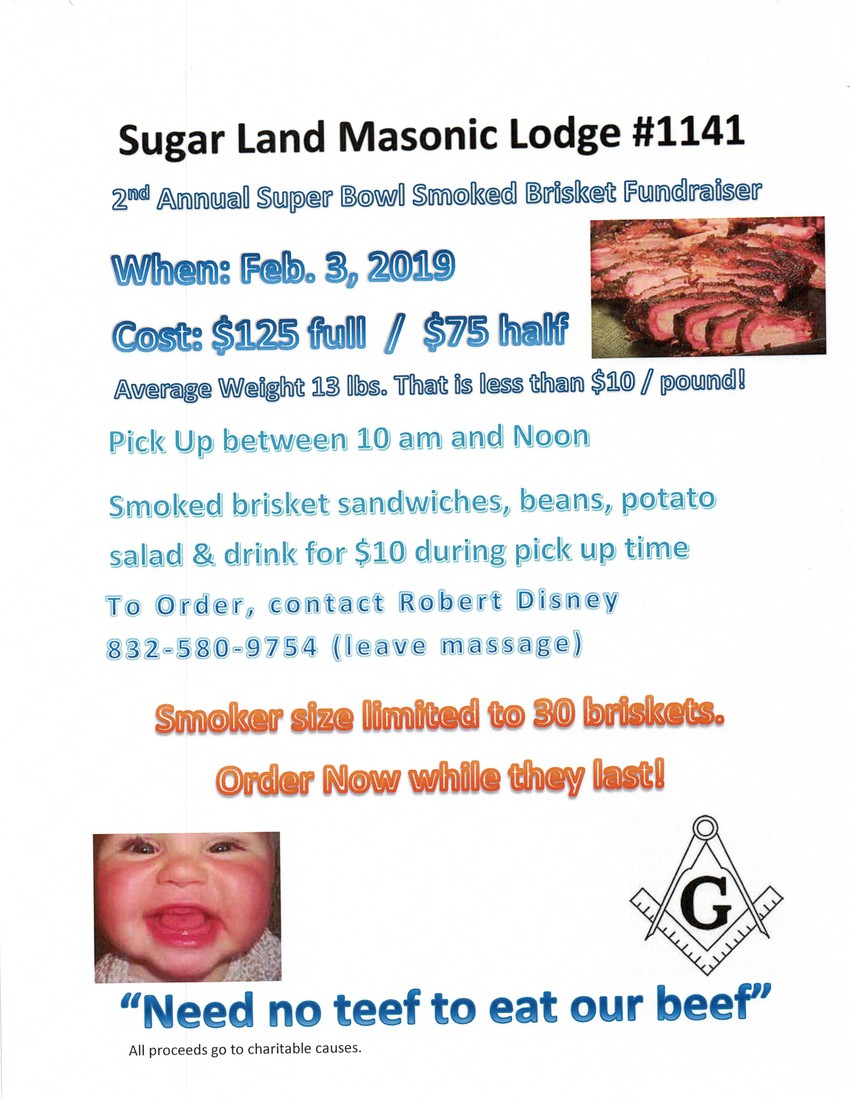 Pleasant Hill #380 will have their Chili Cook-Off & Car Show on Saturday, February 16, 2019. Please see the flyers below for more information. 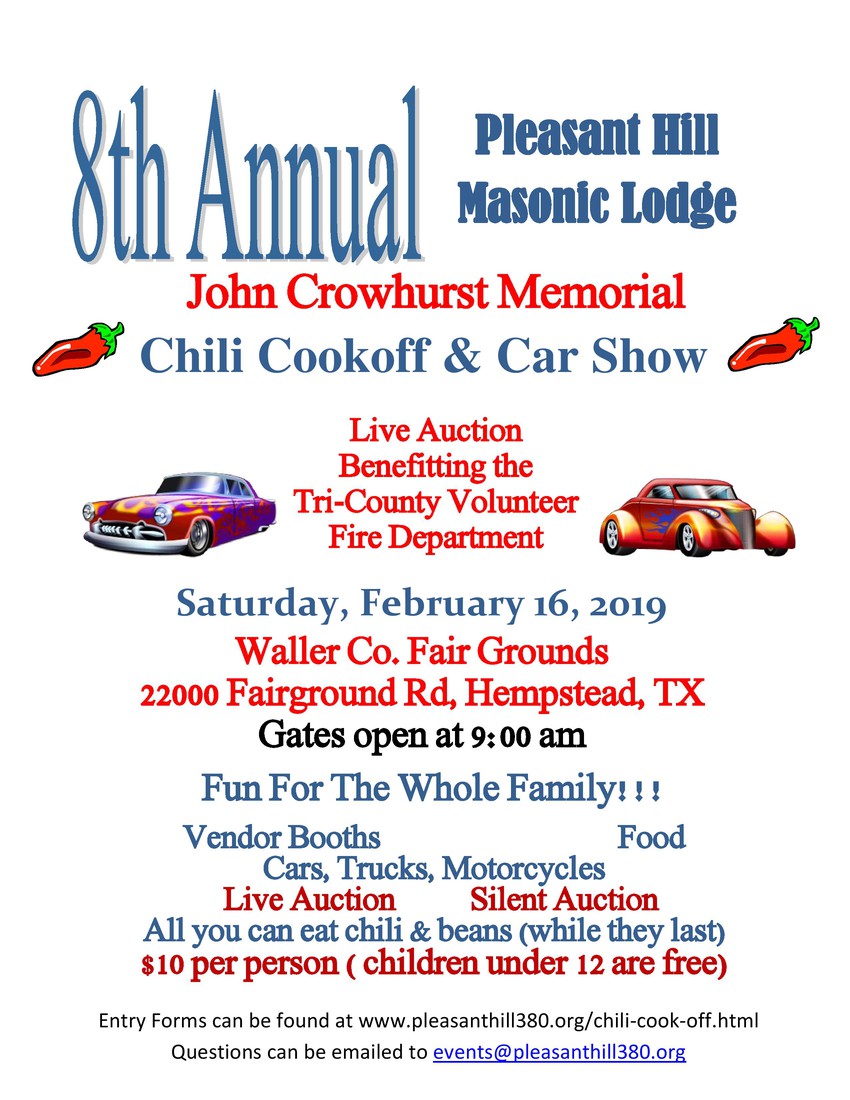 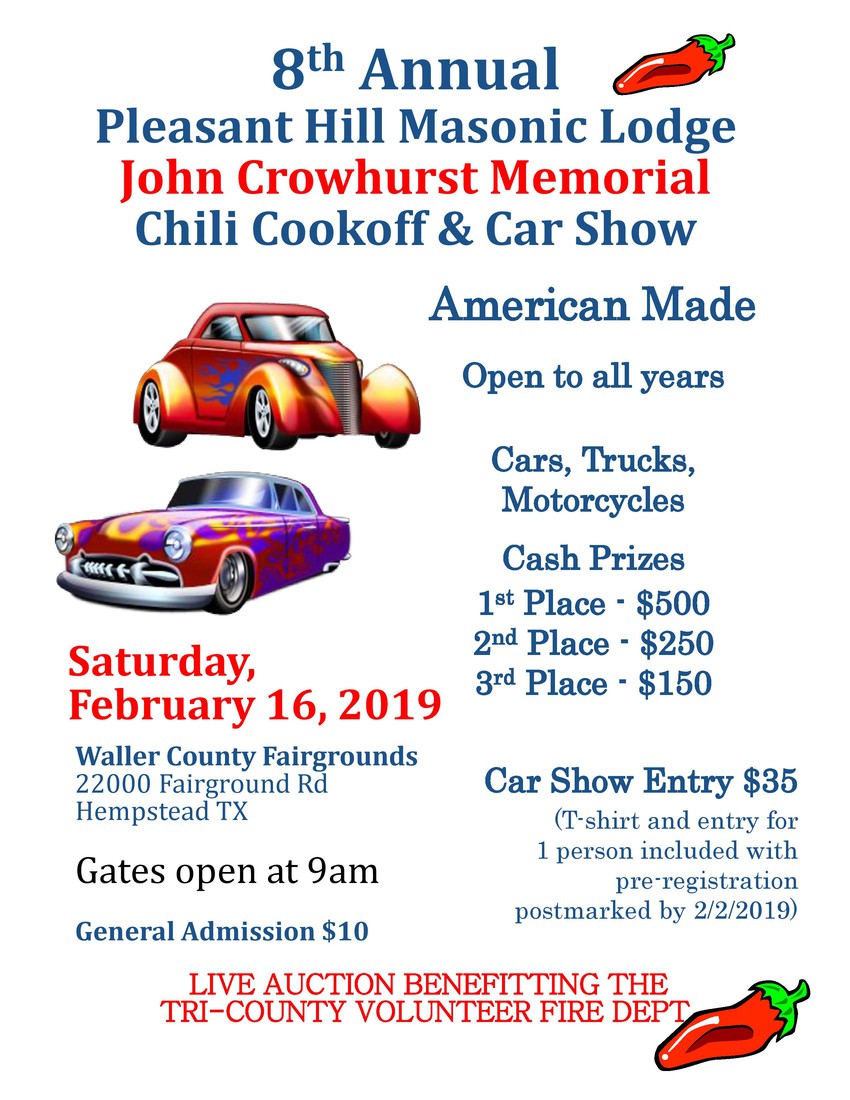 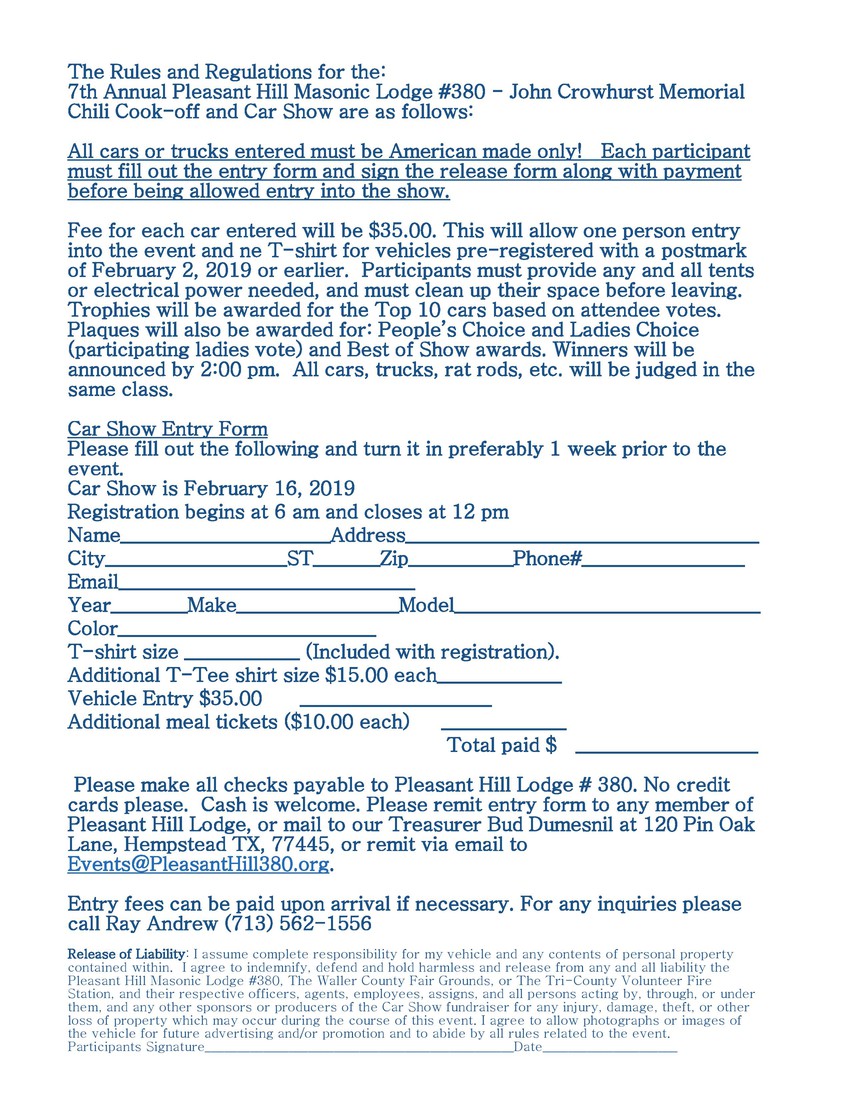 Morton Lodge will be holding a golf tournament fundraiser on March 1, 2019. For information, please contact PM Wes Switzer at 281-226-0760 or weswitzer@yahoo.com.

Brookshire Lodge will be holding their Fish Fry fundraiser on Saturday, April 13, 2019, from 4:00 PM - 7:00 PM at the Pattison Fire Station. They are currently seeking donated items for their silent auction. If any Lodges or Brothers wish to donate items to the auction, you may contact Brother Larry Rankin at lrankin5@comcast.net or the phone number listed at the bottom of the flyer below. 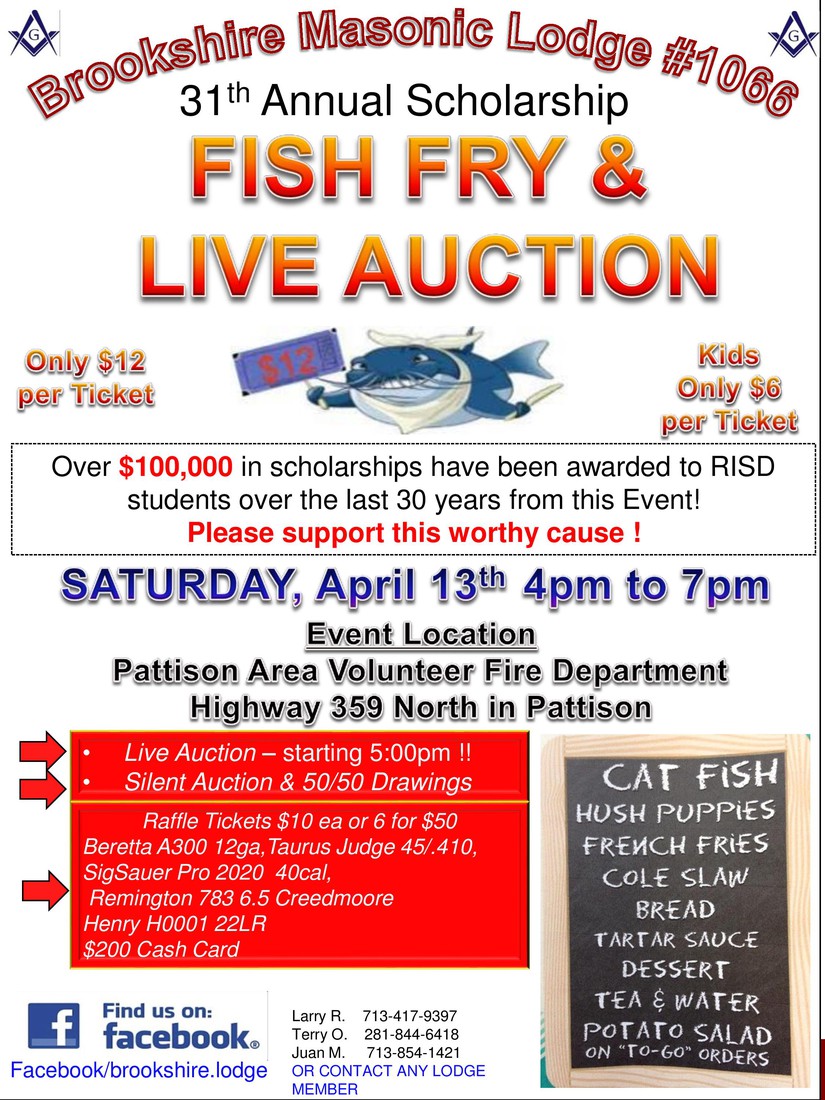 MWSA will be holding a Master Masons Degree Competition this spring. We will be setting a date and getting details out to the Lodges as soon as possible.

If you or any Brother of your Lodge wishes to submit an announcement, event, or other blurbs for our monthly newsletter, please submit those materials below.

Follow David Berndt
Embed code is for website/blog and not email. To embed your newsletter in a Mass Notification System, click HERE to see how or reach out to support@smore.com
close