Mercutio, Romeo's best friend, gives an odd and wacky speech to try and explain to Romeo that he needs to relax.

Romeo states, "And we mean well in going to this mask; But 'tis no wit to go." Romeo feels it isn't safe to go. Partially, he is probably worried, but he also is mopey about not being able to gain the love of the one he loves. Mercutio reply's, "True, I talk of dreams, Which are the children of an idle brain, Begot of nothing but vain fantasy, which is as thin of a substance as the air.." This shows how Mercutio believes that being young and letting your mind roam in dreams is something Romeo is in dire need of, not fantasizing about something he wants, but cannot reach for.

Mercutio, is wild and free, while Romeo is more reserved and calm, and Benvolio is the cousin who encourages Romeo to chase after love.

Romeo's crazy and fun friend, who helps Romeo, and whom Romeo depends on. 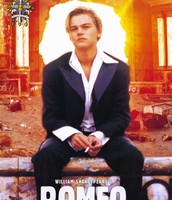 The boy who is crazy about love, but can't seem to find the right person to love. With the support of Mercutio and Benvolio, maybe he will?

Benvolio is Romeo's cousin, and constantly encourages him to continue to fight and try and win over the one he loves before Juliet.

The trio of guys who are diverse and relatable.

"Oh, I see that the fairy, Queen Mab, has been with you. She delivers babies for the fairies, and she is no bigger than a agate for a ring on the forefinger of a magistrate. She's drawn by a team of tiny creatures over men's noses as they lie asleep. her wagon spokes are made of long spiders' legs; the cover is made of the smallest spider web; her steeds' collars are made of the rays of watery moonbeams; her whip is made of crickets bone; the lash a spider's web; her coachman is a small, grey coated gnat, not half as big as a little round worm removed from the finger of a lazy maid. Her chariot is an empty hazelnut shell made by a squirrel, or an old worm, who, ever since anyone could remember, have been the fairies' coachmakers." (lines 56-74). This shows how Mercutio's Queen Mab is supposed to be a person who brings the children, peace, to the parents, people. She is small, so supposedly, she has a wagon made out of the animals of nature, and the food of nature aswell. Night after night she goes out to give peace to people who are restless in there sleep.

Shakespeare included this speech and the interaction between Mercutio and Romeo because it showed how deep the friendship was between them. Mercutio took his time to explain a dream to Romeo how he needed to find freedom and peace, not think about he can't have the woman he wants.