Natrianna is using Smore newsletters to spread the word online.

Get email updates from Natrianna:

The documentary Believe effectively uncovers the truth behind Justin Bieber by revealing how hard his life is by dealing with fame and by showing how he has problems like any other human being.

The purpose of this film is to go behind the fame and headlines and inform people about the real Justin Bieber. Everyone thinks that Justin is just some type of person that doesn't have to deal with anything because he's a celebrity. This film goes against that thought because like any other human he has to go through things too and he has emotions.

One of the main struggles Justin talks about in Beleive is Paparazzi. The image on the right is a clip from the film showing Justin freaking out on the Paparazzi. Justin explains that in that situation he did what he did because he was angry about how they were treating him and verbally abusing him all day so as a human being he raged out. People were looking past the fact that Justin was being disrespected and Justin said in the movie that there's going to be moments when he snaps because he has a heart and that he's a human being but he learns from his mistakes.

The button below is a scene from the film showing how he feels when dealing with them.
Justin running away from paparazzi

In the film, Justin personally talks about a little girl Avalanna Routh that was a fan. Avalanna was one of Justin's favorites, he always spent time with her, brought her out for his shows and loved her with all his heart. When she died it really broke Justin and brought a toll on him. 4 days after she died Justin dedicated one of his shows to her and made her his one less lonely girl. People think that Justin doesn't have feelings for some reason and that he only cares about the fame but its the complete opposite because he cares about everything and he has emotions and a heart.

Justin crying when talking about her death. 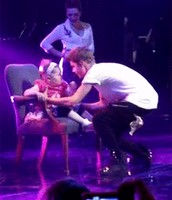 Justin making her his one less lonely girl.

Justin dedicating his show to her after her death. 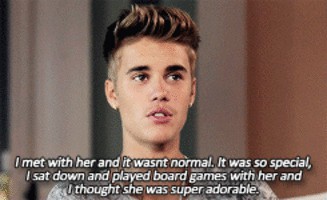 In the film, there's a part where people who are close to him talk about that he has to go through on a daily basis. His mom says he always feels pressure to go out of his way because there's a lot of expectations out for him. His dad says his childhood was taken away from him because of all the work he had to do and he is always being judged. His manager said he's always seeking for acceptance because everyone is just waiting for him to crash and burn. But through all this negativity Justin still manages to keep a smile on his face because he has to.
Justin Bieber's Believe Movie CLIP - Smile (2013) - Justin Bieber Documentary HD
The video is Justin talking about how he has to keep a smile on his face.

This film had a major impact on me because personally I love Justin and it was sad to watch this because he truly opened up about everything he has to deal with. It changed my mind on the fact that celebrities and people in high positions are human, and they have feelings like everyone else. Everyone deserves respect and privacy and everyone deserves to be treated like a human being and not some type of caged animal or robot.

Natrianna is using Smore newsletters to spread the word online.

Follow Natrianna Nobles
Contact Natrianna Nobles
Embed code is for website/blog and not email. To embed your newsletter in a Mass Notification System, click HERE to see how or reach out to support@smore.com
close