Rameck and 6 of his friends were in Plainfield hanging out on the steps at the back entrance of school. One Wednesday afternoon, the day before Thanksgiving, 1989. Crack head was beaten and stabbed for smoking behind the school where the children play.
A group of 7 high school boys were hanging out in their usual spot, the back steps to the school. A crack head walked over to the boys and asked to buy crack, one of the boys sold it to him and asked him not to smoke it behind the school because of the children. The crackhead didn't listen so the boys walked over to him and asked him to leave. One of the boys punched the crackhead in the face and all the other boys joined in. All punching and kicking the crackhead for 20 minutes, till he was red, black and blue. Rameck remembered he had knife in his jacket pocket. He wanted to impress his boys so he pulled it. He was hesitant but he stabbed the crack head in the thigh right under his butt. All the boys cheered in agreement and went back to finish their beer. They spotted a cop car, the cop called them over. The cop questioned the boys and checked them all for the knife. The cop found the knife in Rameck's jacket pocket. The police man choked Rameck, threw him against the car and kneed him in the stomach. Two other police cars and an ambulance carrying the injured man pulled up behind the school. The crackhead identified the boys. The officer handcuffed the boys, pushed them to the precinct station. Since it was a holiday weekend and no judges were available, Rameck had to stay locked up for four days. 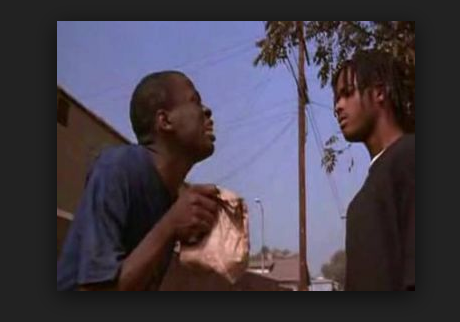