William Shakesphere's, "Romeo and Juliet," is about a tragic love story between star crossed lovers.

Sadly, in the end, events didn't go exactly as planned. Romeo and Juliet actually die together around the same time. However, they probably knew that they couldn't keep their love a secret forever.

I'll shall explain more in the plot later on.

Brief explanation of the play.

Some captions that may interest you:

One of the title characters of William Shakespeare's, "Romeo and Juliet". The male protagonist of the play. (on the right of the picture.)

One of the title characters of William Shakespeare's, "Romeo and Juliet". The female protagonist of the play. (on the left of the picture.)

Two leading families in Romeo and Juliet. Both families have been in a long feud with each other for generations.

"Romeo and Juliet", By: William Shakespeare 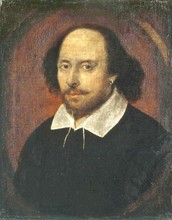 When did the feud between the Montigues and Capulets first started?

Do you think William Shakespeare wrote the play?

Couldn't Tybalt have killed Romeo if he'd not hesitate?

Was it destiny for Romeo and Juliet to die together?

Think I could of done better? Contact me so ill know what you think.

Thanks for taking the time to review this!