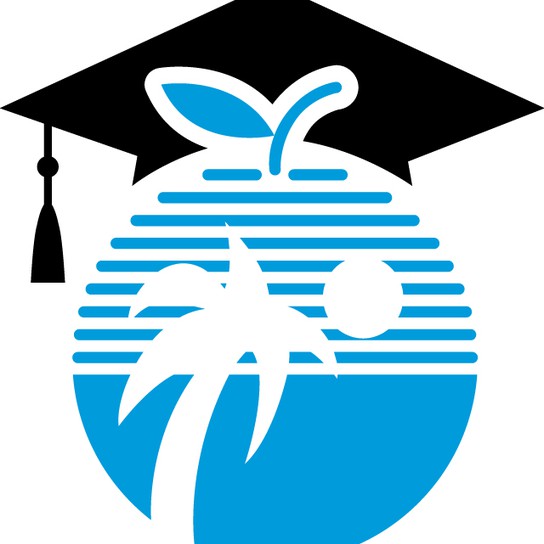 Take a virtual tour of construction work across the District in the latest ReelSMART video. Click play on the video below or click here to watch it on StreamVu. 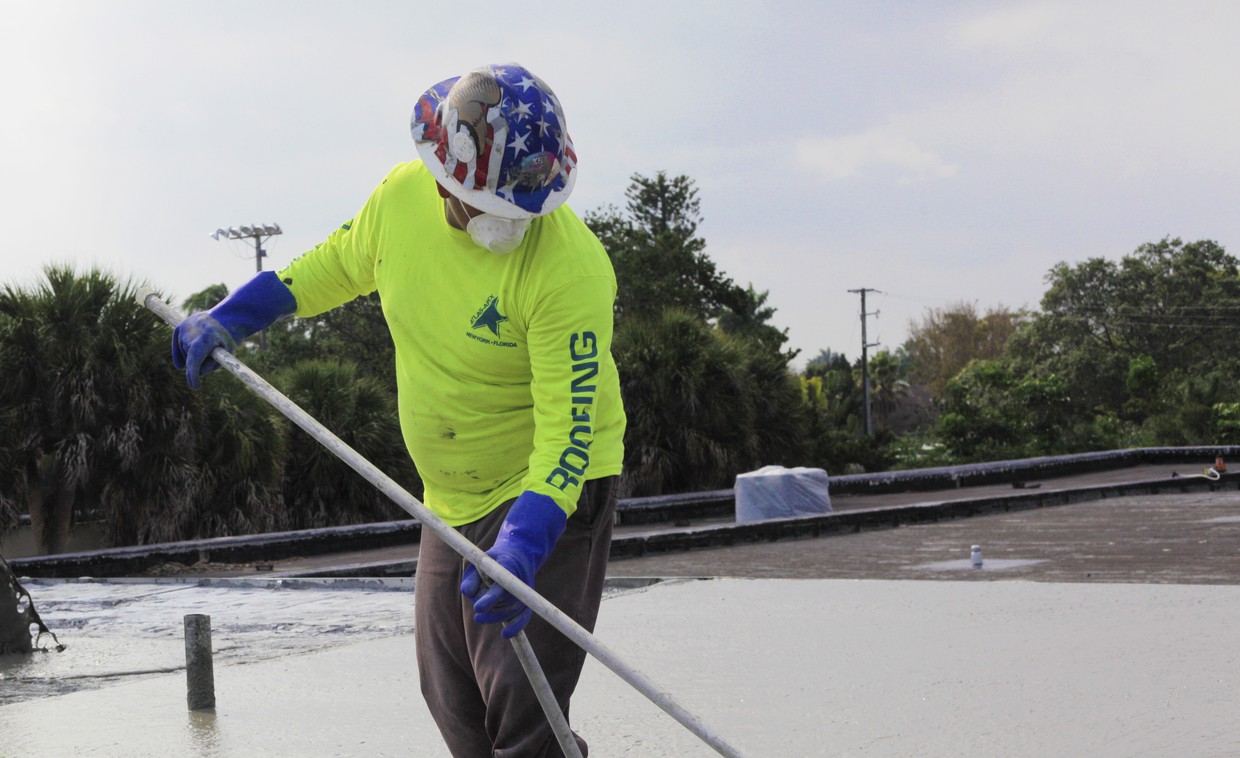 While students and the majority of staff are not present on school campuses due to the coronavirus pandemic, the SMART team has utilized this time to move forward with renovations while maintaining all necessary safety precautions.

As students have continued the school year through distance learning, the empty campuses allowed additional progress to be made. This is due to:

Ensuring this work can continue safely, with consistent coordination and planning between all involved parties, is the highest priority. By continuing with these efforts, contractors working with the program have been grateful for the ability to maintain active work schedules.

The SMART management team continues to monitor all safety requirements daily, including guidance related to the pandemic, for any necessary changes in approach. 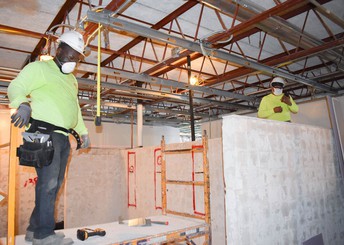 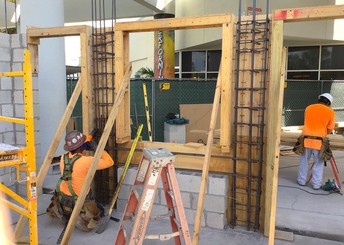 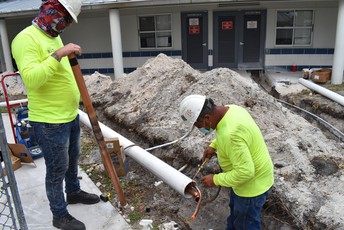 Fourteen schools are now in the Construction Closeout phase. This includes five additional schools that reached this milestone since the previous SMART Update at the start of 2020. 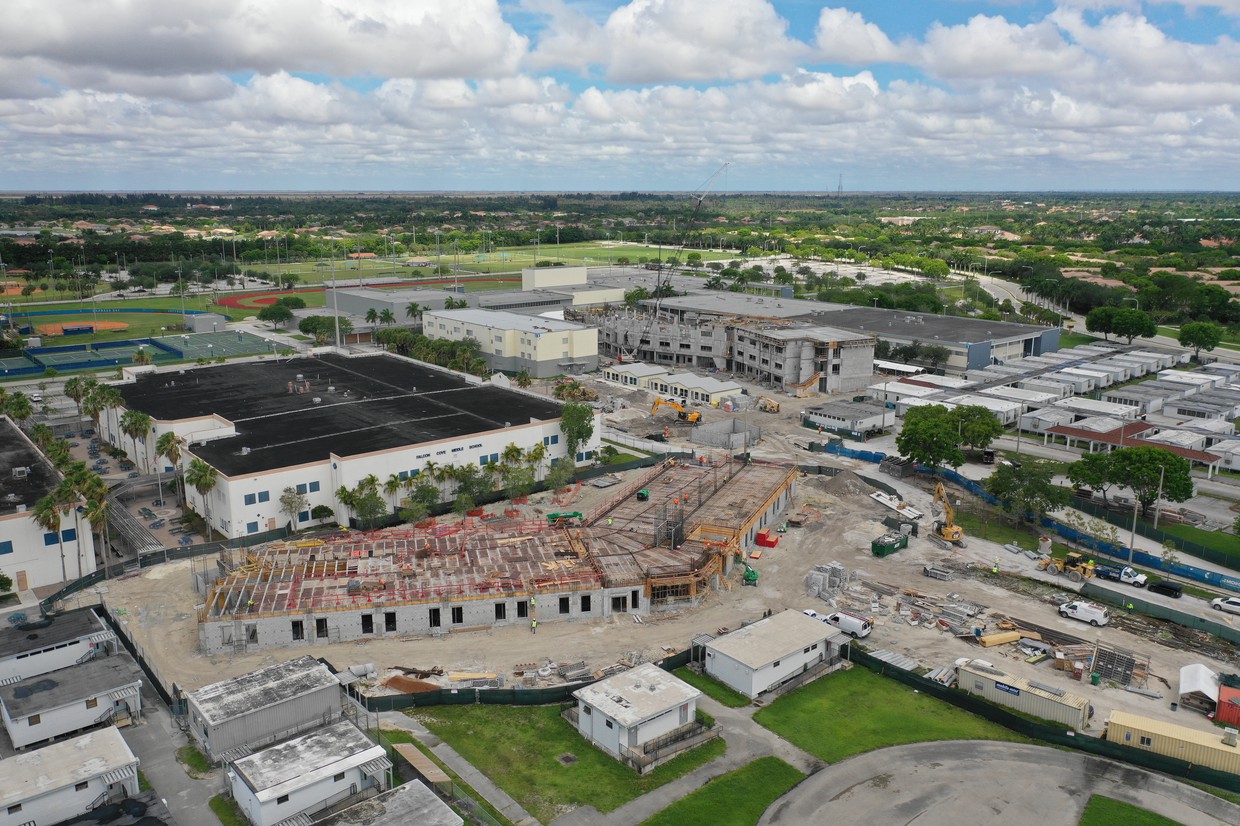 In Weston, two new buildings are rising side by side on the neighboring campuses of Cypress Bay High School and Falcon Cove Middle School.

As the only high school in a city that has grown exponentially over the years, Cypress Bay High School’s student population has exceeded its capacity. Portable classrooms began appearing on campus to make room for the additional students until a more permanent solution was established. 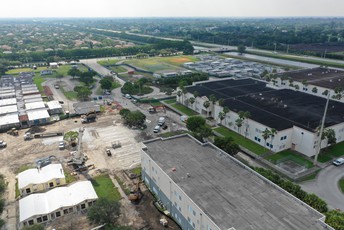 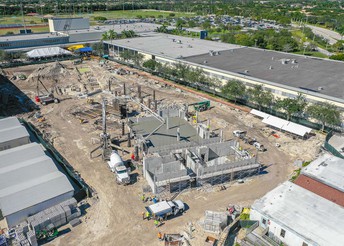 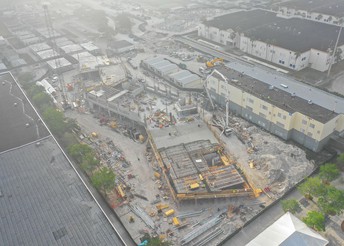 As could be expected, a similar situation was taking place next door at Falcon Cove Middle School. Like its neighbor, Falcon Cove relied on portables to accommodate its growing student body. However, due to both schools being in close proximity to the Everglades, flooding in the portable classrooms became a serious concern. 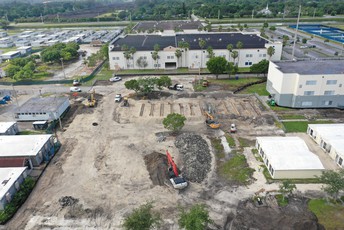 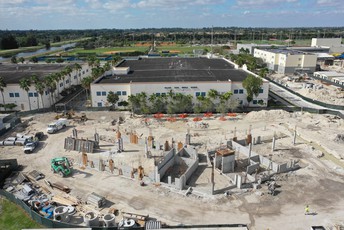 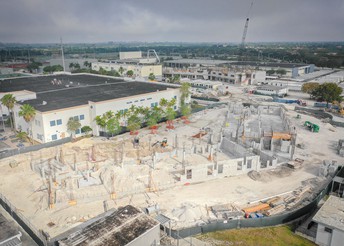 The construction of both buildings received a Notice to Proceed (NTP) in June 2019, giving contractors permission to mobilize on the adjacent campuses and begin work.

Time-lapse cameras are covering the progress and recording thousands of images daily, so make sure to look out for more time-lapse updates as work proceeds. Click the videos below to see two months of work in seven seconds at both project sites.

Cypress Bay and Falcon Cove's new buildings are both expected to be ready for students in 2021.

Ever wonder what some of the improvements listed as part of your school’s Primary Renovations mean? For example, what is a building's envelope? How is a fire sprinkler system upgraded? Why is getting a new HVAC unit so important? THE SCIENCE OF SMART gives you a better understanding of what it all means, how these things operate and why we should care.

In this SMART Update, we sound off about fire alarms.

Think about how many fire drills you’ve experienced dating back to elementary school. Why so many? The obvious answer is that you’re practicing for what to do in case of a real fire, but fire drills are also a great opportunity to make sure the fire alarm system is functioning properly.

There are several components to a fire alarm system, including pull stations, control panels, and above ceiling conduits. 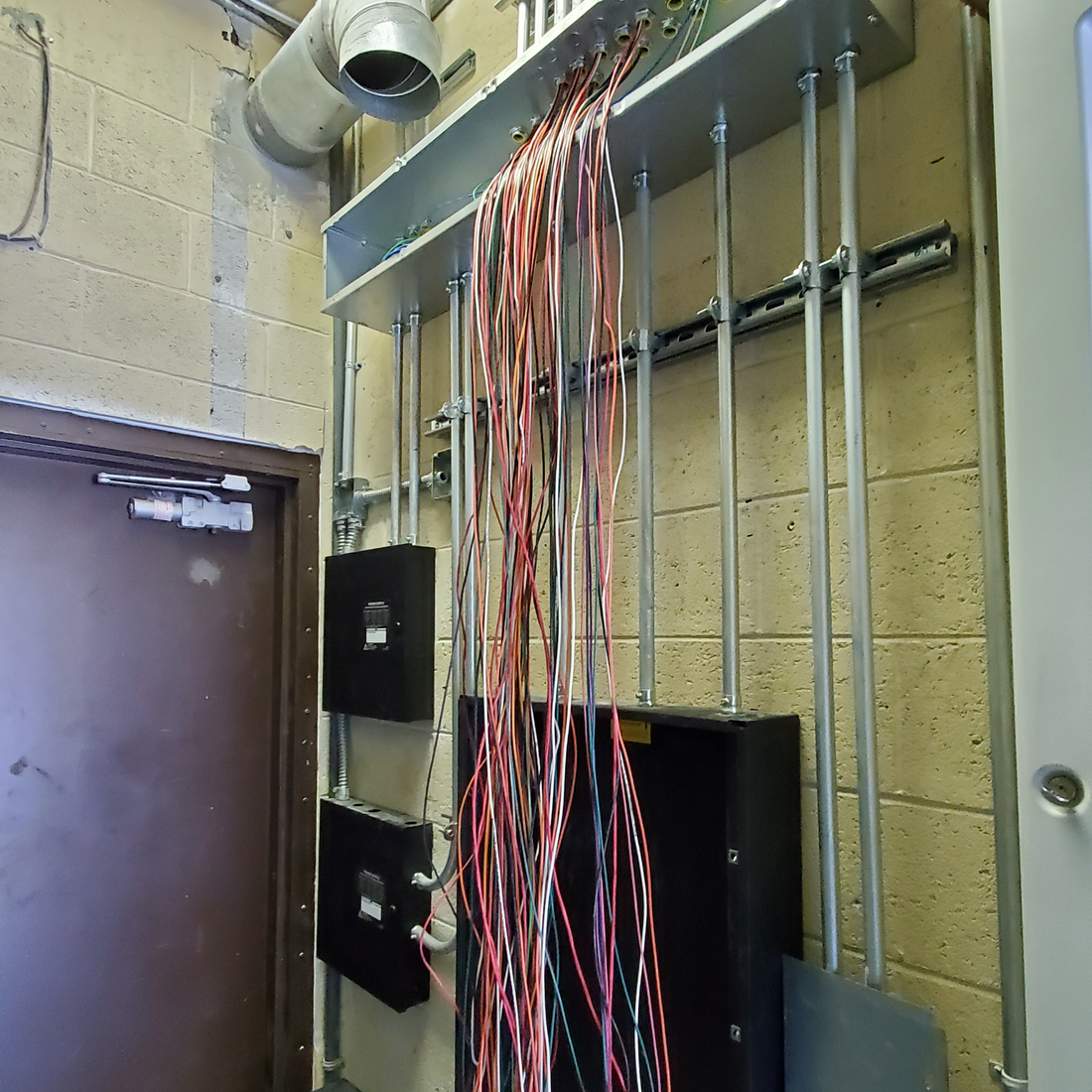 Of all the components in a fire alarm system, the pull station is probably the most recognizable. They’re the red boxes you see all over campus with a handle that reads “pull down.” A pull station can be activated manually or by smoke sensors when a fire is detected. It then sends a signal to the control panel, which, as you may have guessed, is what controls the fire alarm system.

Once the panel receives a signal from the smoke sensor or pull station, it alerts the local fire department that help is needed. The above ceiling conduit aids in making all this possible. The metal tube that protects the electrical wiring used to connect all of the devices in a fire alarm system is placed in the ceiling to make it easier to access during inspections.

Improvements to a school’s fire alarm system are common in the SMART Program, with nearly 100 schools having it listed as part of their Primary Renovations. Also found among the upgrades is the ability to record a voice message providing instructions once the fire alarm goes off. The message accompanies the loud buzzer sound we're accustomed to hearing. 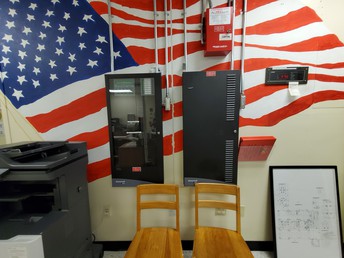 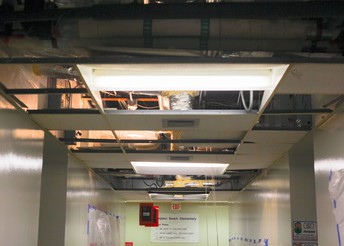 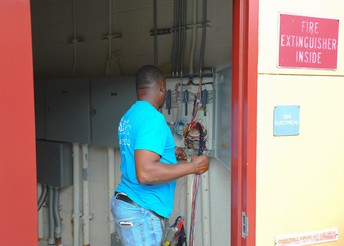 Renovation work is all set to begin at Northeast High School after the School Board of Broward County officially approved the first scope of SMART Program renovations in April 2020.

The SMART Program upgrades at Northeast High School were divided into two scopes of work to ensure the most effective process for the school's enhancements: 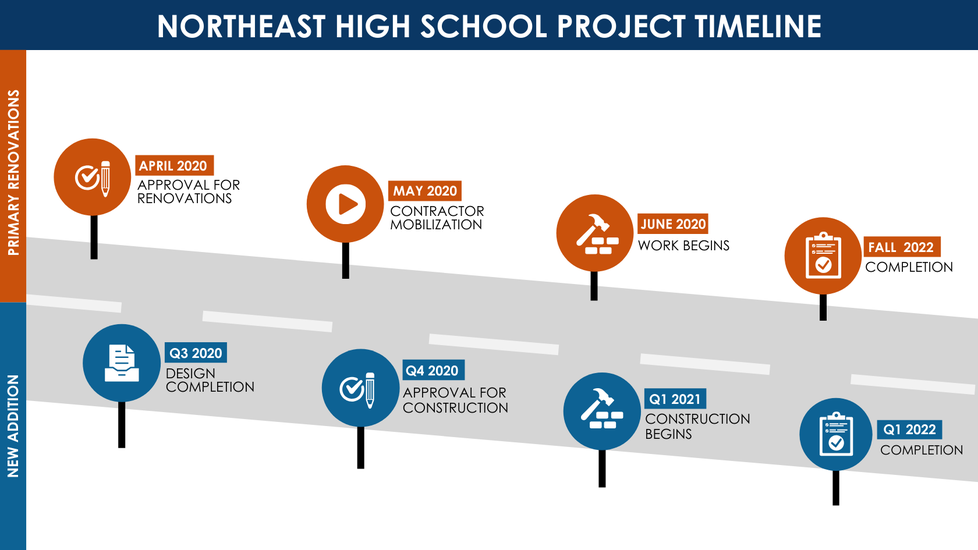 For the approved renovations, contractors are expected to begin mobilizing shortly, with work scheduled to begin in June. These improvements will primarily consist of roofing repairs, HVAC upgrades, fitness center renovations, STEM Lab upgrades and other structural enhancements.

The long-awaited fitness center upgrade has been made a priority and is expected to be ready for students to make use of upon their return from winter break.

The SMART Team and the District would like to thank the community for its patience and collaboration during this process, as the necessary time was taken to find the best solutions available for the Northeast High School campus and the educational experience of its students and staff. 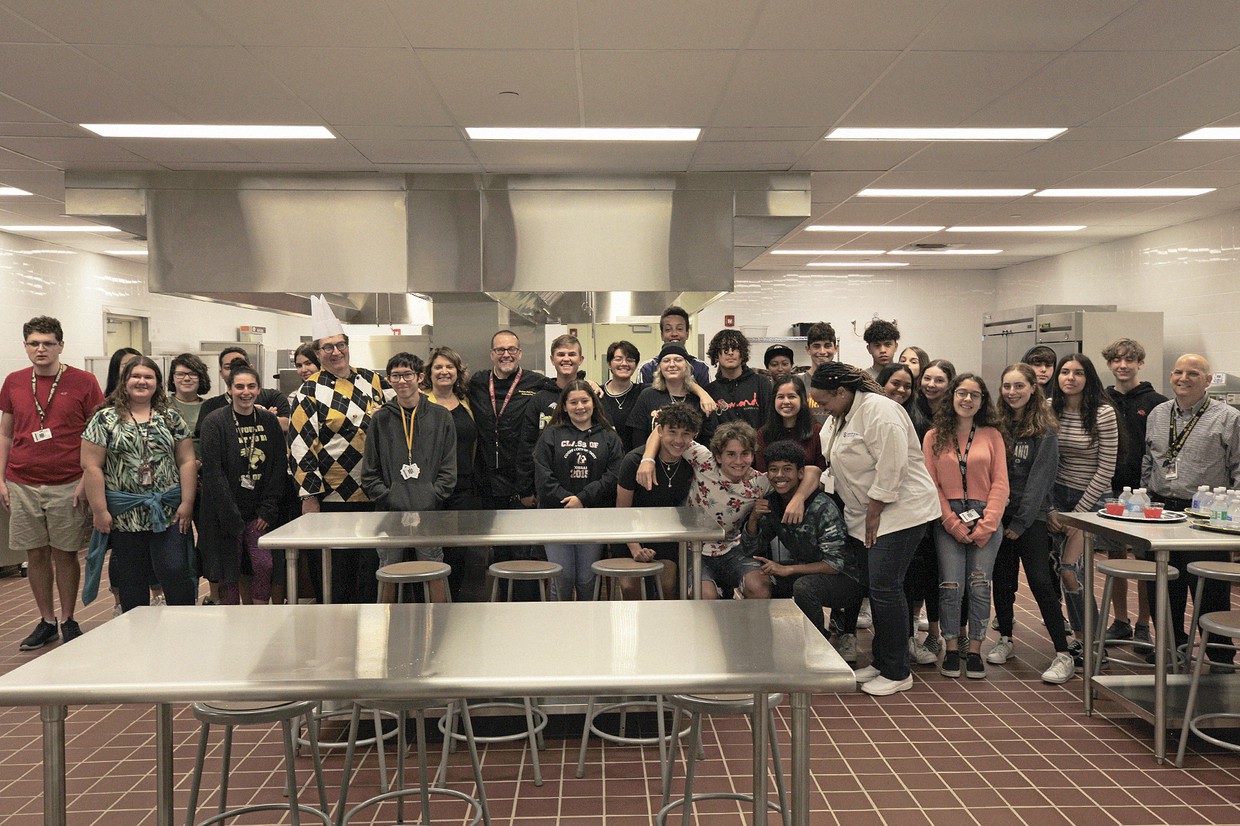 With a new Culinary Program recently added to its curriculum, the school requested the acceleration of its STEM Lab funding to quickly meet the needs of the two-year-old program. With the location otherwise unoccupied, the work was able to begin ahead of schedule, and was ready for students to use in mid-January.

Upgrades to the lab include a walk-in freezer, two gas stoves, an ice machine, a water cooler and a grease trap.

“This is equipment the school board should never have to replace if it’s taken care of – which it will be,” said Richard Vaugh, the Culinary Arts instructor at Western. “It’s a beautiful facility. There is really nothing more that we could ask for.”

Other projects now in motion at Western High include the teacher planning room, ADA renovations to the group restrooms down the hall from the Culinary Lab and the clinic restroom in the front office. 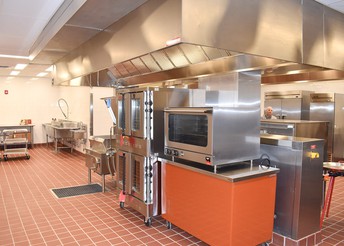 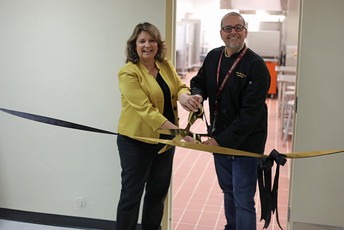 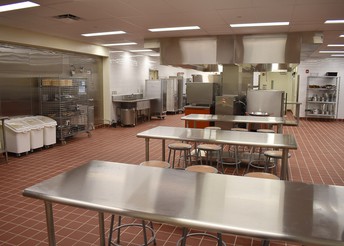 WATCH: SCEP HIGHLIGHTS ACROSS THE COUNTY

The School Board of Broward County’s Supplier Diversity Outreach Program (SDOP) is committed to providing small, minority and women-owned businesses the opportunity to participate in District projects, including the SMART Bond Program.

The SMART Program wants to continue to increase its engagement with small, minority and women-owned businesses, which currently make up 24% of its suppliers.

Get pre-qualified today to begin taking advantage of these opportunities!

The School Board of Broward County, Florida, prohibits any policy or procedure which results in discrimination on the basis of age, color, disability, gender identity, gender expression, genetic information, marital status, national origin, race, religion, sex or sexual orientation. The School Board also provides equal access to the Boy Scouts and other designated youth groups. Individuals who wish to file a discrimination and/or harassment complaint may call the Director, Equal Educational Opportunities/ADA Compliance Department & District’s Equity Coordinator/Title IX at 754-321-2150 or Teletype Machine (TTY) 754-321-2158.