Treavor is using Smore newsletters to spread the word online.

Get email updates from Treavor:

The Tropical Savanna is hot, we aren't lion.

The Tropical Savanna is hot, we aren't lion.

By Treavor Johnson and Jackson Barnum

We warmed you about the hotness.

Hopefully we are dewing this right.

Hopefully these plants don't soil themselves.

Plant life in the Tropical Savannas is very well, even though the heat is very intense. Grass can grow to three to nine feet tall! There are trees in the Tropical Savannas, like the The Acacia tree, and the Baobab tree. The Acacia tree can grow up to 65 feet once in full maturity. The Baobab tree can live up to a whopping 1000 years, thanks to a big, thick, trunk. The Baobab tree looks like it upside down, and one Arabian legend proclaims that the devil pulled the tree out of the ground, and put it back in upside down. The shrubs you will find in a Tropical Savanna do not have leaves. Instead, the shrub has many thorns.

Elephant grass is named after elephants because it can grow extremely tall; Three to Nine feet tall!

These trees can live 1000 years! Arabian legend says that the devil put this tree in the ground upside down.

The Acacia tree can grow up to a decent 65 feet tall once at full maturity.

Why isn't there any gambling in Africa? ....... There is to many Cheetahs!

The male lion has a mane, while the female lion does not.

This is a laughing Hyena.

The Savanna Elephant is the biggest subspecies of elephants. 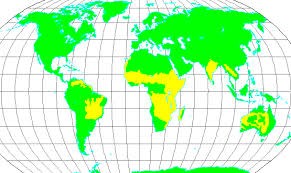 Video on the Tropical Savanna

Life around Tropical Savannas in Africa.

In Africa, people have began to raise ostriches and other known herbivores on Savannas, because, the usual domestic animal takes awhile to grow used to the grass of the Savannas.

Treavor is using Smore newsletters to spread the word online.