Krysta is using Smore newsletters to spread the word online.

Get email updates from Krysta: 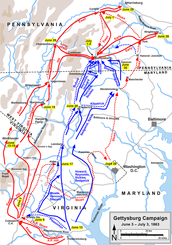 Robert E. Lee began to march his armies after his victory at Fredericksburg and Chancellorsville. On June 3rd, 1863, Lee's army left their camps near Fredericksburg, VA and began marching North, using the mountains to cover their movement.

General Robert E. Lee marched into Pennsylvania, he knew that the southern government had drafted a letter offering peace to President Lincoln. This letter was to be delivered to Lincoln after the Union army was destroyed somewhere in Pennsylvania. Lee knew that if he could destroy the Union army, Lincoln would agree to peace and it would mean the Confederates had achieved their goal of winning independence and the war.

When General Lee marched into Pennsylvania, he missed one key element of his army, the cavalry. The unions had a better advantage because they did have a cavalry. 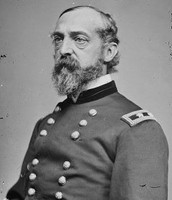 George Gordon Meade was a career United States Army officer and civil engineer involved in coastal construction, including several lighthouses. He fought with distinction in the Seminole War and Mexican-American War. During the American Civil War he served as a Union general, rising from command of a brigade to the Army of the Potomac. He is best known for defeating Confederate General Robert E. Lee at the Battle of Gettysburg in 1863. 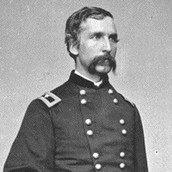 Joshua Lawrence Chamberlain was the commander of the 20th Maine regiment in the American Civil War. He led the 20th at the battle of Gettysburg when they held the extreme left of the union army on the hill known as Little Round Top. Chamberlain thus saved Little Round Top for the Union and prevented it's capture by Lee's Confederates, a move that would almost certainly have lost the war for the north. 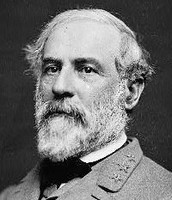 General Robert E. Lee is one of the most iconic and widely respected of all Civil War commanders. He repeatedly defeated larger Federal armies in Virginia but his two invasions of Northern soil were unsuccessful.

a confederate division clashed against General Burford's dismounted cavalry outside the town of Gettysburg. Union General Reynolds' corp came up and Reynolds was killed in the fighting. The Confederates won in the field that day.

Lee sent Longstreet's corp around the flank and sent General Hood up to a place called Devil's Den which he couldn't take. Then Lee sent Genral McLaws' division up Little Round Top (hill). There they clashed with Col Chamberlain's Twientieth Maine regiment. The rebels hit Chamberlain with wave after wave of infantry and eventually his men became exhausted and low on ammo, so Chamberlain with no options at all left, performed a bayonet charge against all military precedent downhill and caught the rebels as they surged up.

Longstreet had his chief of Artillery, Col Alexander, fire his guns at the union centre line which was where Lee was planning the attack in order to converge on them to try and knock out the union cannons. Meanwhile Longstreet had hidden Pickett's division in the forest which was the only division yet to engage in the fighting. As well as Pickett's division there were also Generals Pettigrue's and Trimble's divisions. Alexander's cannons were running low on ammo and they didn't have enough to support the infantry, so all forty cannons simultaneously fired off a single blast. Then the infantry set out on the mile-long walk towards the union centre which was deployed at the ready, at a stone wall just outside Gettysberg. The confederate divisions were racked. Pickett's division reached the stone wall but with over 50% casualties; they couldn't hold it.

It was in northern territory, so the Northern troops had the morale boost. Its a lot easier to take a man's life when he is on your land then when you are on his (Although its hard in either case). They also took up defensive positions atop hills in the area, and forced the southern troops to attack up steep slopes, forcing them to run uphill directly into enemy fire. The battle could have gone either way, but "Picket's Charge," a southern attack at the flank of the Northern defensive line failed, and the south was forced to retreat. From there, the Southern army was depleted, and the Union army was able to go onto the offensive after two years of playing defense.

Krysta is using Smore newsletters to spread the word online.