Lithuania has been around for thousands and thousands of years. The Kingdom of Lithuania was created on July 6, 1253. During the 14th century Lithuania was the biggest European country, however the borders were very different and the kingdom included parts from many of the surrounding modern day countries. Lithuania declared independence during World War I, on February 16, 1918. Pictured to the right is the original 20 members of the Council of Lithuania after signing the Act of Independence of Lithuania.

The Ninth Fort is a stronghold in the northern part of Lithuania. It was constructed in the late 19th century and used during the occupation of Kaunas and the rest of Lithuania as a prison and way-station for prisoners being transported to labor camps. After the occupation of Lithuania by Nazi Germany it was used as a place of execution for Jews captured by the Soviets. They constructed a monument, pictured to the right, for victims of the Holocaust. 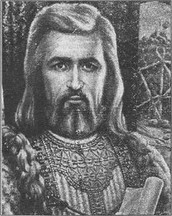 Gediminas was Grand Duke of Lithuania from 1315-1316 until his death. He is noted as founding the political entity and expanding its territory as well as being one of Lithuania 's most notable people in its early history. He was responsible for building the capitol, Vilnius, and establishing a dynasty that can be traced to other European monarchies such as Poland, Bohemia, and Hungary. One of the most remembered things about him was his reputation of being a champion of paganism, who successfully diverted attempts to Christianize his country by skillful negotiations with the Pope and other Chrisian Rulers

The Lithuanian flag was re-adopted on March 20, 1989, almost two years before the re-establishment of Lithuanian's independence and a little over three years before the collapse of the Soviet Union. It was first used in Lithuania's first period of independence from 1918 to 1940. In 1941 Lithuania was illegally annexed into the Soviet Union and were under Soviet control until 1990. The colors on the flags have a meaning. Yellow is symbolic of the country's wheat fields, green is symbolic of the forests, and red symbolizes patriotism.

The most symbolic line in the national anthem comes towards the end of the song, "May our love for Lithuania, Keep burning on in our hearts, In Lithuania's name, We shall stand together." I think this is a very important line because this country has stood together through a lot of stuff such as being annexed into Soviet control for nearly half of the 20th century. It is very important that they stood together and gained independence back because had they not stood together and demanded independence back, there may never have been a re-establishment of the country and it could still be under control from another country.