Get email updates from Gabriela: 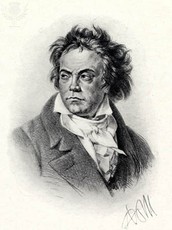 Ludwig van Beethoven was born on December 17, 1770 in Bonn, Germany. He did not have the best childhood there could be. His Father, Johann saw his musical talent and nurtured it. Most people think he saw it was a source of income. When Beethoven was 17 he went on a trip to Vienna, he got the chance to meet one great composer Mozart. Mozart then went on telling Beethoven "You will make big noise in the world." He sadly had to cut the trip short with his mother dying. After his father and mother were dead Beethoven moved to Vienna. Beethoven had a bad temper but he could be kind and helpful.

Beethoven had 6 siblings but only 3 lived. Just before he wrote his first symphony, at age 28 he started to lose his hearing. After that he could only focus on music, he started to not care what he looked like or his rooms. Beethoven never married in his life, but there were women that were important to him as he dedicated pieces like Moonlight Sonata and Fur Elise. Beethoven died on March 26, 1827 in his room from lightening. His last word were "I shall hear in Heaven"

Beethoven wrote 9 symphonies, some of his most known are the 3,5,9. Symphonies 3 was originally dedicated to Napoleon. After he put himself on top of everyone Beethoven said it was for a memory of a great man. Symphonie number 5 has the very famous Da-da-da-daah. He wrote many pieces that is still played to day.
Ludwig Van Beethoven's 5th Symphony in C Minor (Full)