Get email updates from Tar:

Nyjah Huston "The best skateboarder in the world"

Nyjah Imani Huston, Born on November 30th 1994 (age 19), is an American professional skateboarder. He was born in Davis, California, started skateboarding at the age of 5 and in 2013, he won more prize money than any skateboarder in history. He inspires many skaters and is sponsored by DC Shoes, Monster Energy, AYC, Element Skateboards, Diamond Supply Co, Ricta Wheels, Mob Grip, and Stance.

Nyjah wanted to start a water charity for people who don't have clean water or access to any clean water. He says "There are currently 1 billion people in the world who live without clean drinking water. More than 3.4 million people die each year from water, sanitation and hygiene-related causes." He started a charity called "Let It Flow" to raise money for building clean water wells, repairing inoperable wells, building sanitation facilities and providing hygiene education. His goal was to raise $18000 for his charity by his 18th birthday.
Nyjah Huston's Crowd Funding Campaign

Nyjah Huston started skateboarding at the age of 5 and still skates now. He won the legendary Tampa Am event(amateur skateboard competition in Tampa, Florida) at 10 years old. At age 11, Huston was the youngest competitor in X games(an annual sports event that focuses on extreme sports), he then won multiple gold medals from X games and Street league Championship titles(international competitive series in professional skateboarding). Nyjah Huston won $50 000 at "Take the cake" in 2012. Take the cake is a skateboard competition hosted at Canada's wonderland with the winning prize as a 'cake' made of real money in $50 000 cash. 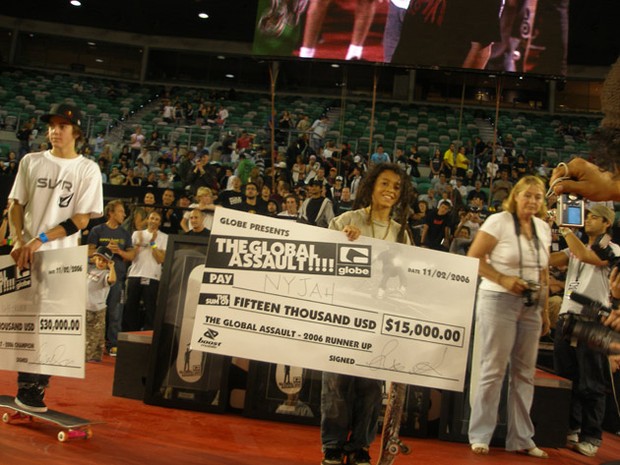 Why is Nyjah Huston so important?

Nyjah is a great example to kids around the world, not only to skateboarders. He shows, that with great talent, anything is possible if you put your "mind over matter". He is also inspiring to everyone because of his life story, with many ups and downs and his father leaving his family, skateboarding could have came to an end quickly. But with his amazing talent, nothing was able to stop Nyjah and his career, making him one of the greatest legends to step on board. The video below "Nyjah Huston's Growing Pains" talks about his life, problems and how he became who he is now.
Nyjah Huston's Growing Pains