Interview with the Arrivals

We had to get the scoop on how this many people could have arrived at once, so we sent our best reporter Charon to get some information.

Charon- So, tell us your story, all of you? How did you get here and why?

Arrivals- We are suitors of the hero Odysseus. We tried to court his wife and take over his kingdom for around 20 years.

Charon- I'm sure the gods had to have warned you some time or another of the coming massacre.

Arrivals- Yeah, I guess we were warned several times of Odysseus's return....

Charon- So how did it happen? I'm sure you had to see Odysseus coming.

Arrivals- Well, he disguised himself as an old beggar. We had a contest on who could shoot Odysseus's arrow through 12 axe handles, and whoever won would be the winner of Odysseus's throne. But none of us could even string the bow. An old beggar (who we now realize was Odysseus) asked if he could take a try. We mocked him, saying, "A bow lover, a dealer in bows, maybe he has one like it at home! (Chapter 21)" But Penelope, Odysseus's wife, came out and told everyone to give him a try. Telemachus, Odysseus's son, told his mother something and she left hastily. The beggar took a try and plucked the bow with ease. He then shot directly through all 12 axe handles. A bolt of lightning struck the sky.

Charon- What were you thinking then?

Arrivals- We were shocked and somewhat frightened. The beggar then leapt onto a steeple. Telemachus came to his side and drew his sword. The beggar then pronounced, "So much for that, your clean-cut game is over. Now watch me hit a target that no man has hit before, if I can make this shot. Help me Apollo!(Chapter 22)"

Antinous (The leader of the arrivals)- I guess that I was the "target." He shot me right through the neck. I went down pretty hard.

Arrivals- We threatened the beggar, exclaming, "Foul, to shoot at a man! That was your last shot! Your own throat will be slit for his! (Chapter 22)" We searched the walls for weapons, but there were none. I guess they had been hidden the night before. Then the beggar revealed his true form; Odysseus.

Charon- I bet that's when you realized you were screwed.

Eurymachus (one of the suitors)- Yep, I got down on my knees almost instantly and begged for my life. I promised to pay him back and to give him immense wealth, but he did not care. He chopped my head clean off.

Arrivals- We all started searching for a way out of the hall to escape, but we couldn't. We knocked on all the doors, but they were locked. Odysseus and Telemachus had planned ahead and had all the maids go in their rooms and lock the doors. Telemachus then joined the fight. We didn't stand a chance. We were hacked down and left for dead on the floor of the hall.

Charon- And that's how you all got here! Great story. We thank the goddess Minerva for submitting this fine piece of art depicting the gruesome scene in the hall. 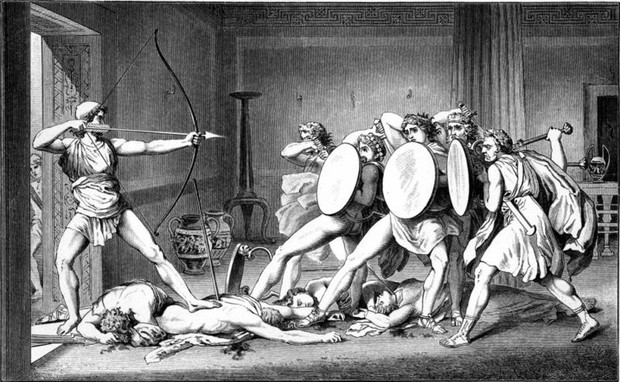 Interview with a dozen maids

Just a little bit after the suitors arrived, about a dozen maids arrived. Charon was at the scene.

Charon- So ladies, tell us your story? Are you related to all the suitors?

Maids- After Odysseus was done killing, he asked the nurse about any unfaithful maids. She told Odysseus about all of us. He had us clean up all the dead from the prior massacre and then he had us all hanged from one wire.

Charon- Very exciting! Thanks for your time. If there's anything that we can learn from these stories, it's that it pays off to be loyal.

Antinous's dad has just arrived also, so once again Charon is getting the information.

Charon- (Sigh) So how did you get here?

Antinous's dad- Some of the people on Ithica, mainly parents of the dead suitors, were angered with Odysseus. We went out to fight Odysseus. But ironically, Odysseus killed me just like he killed my son. Athena called off the fight before anyone else got hurt.

Charon- Thanks for the story. Well, hopefully that wraps it all up. News from topside tells us that Odysseus is once again the king of Ithica, and that peace has been restored.

Connect with Justin A