McGaheysville Elementary School is a Rockingham County Public School located at the base of the Massanutten Mountain in McGaheysville, Virginia. There is an enrollment of approximately 250 students in grades PK-5. Students that attend McGaheysville are part of the East Rockingham High School attendance area.

At McGaheysville Elementary School, we believe that all children can learn and be successful. We also believe that learning occurs best when there is a cooperative effort between the home, school, and community. With the commitment to student learning from the home, school, and community, each student at McGaheysville Elementary School will have an exciting and successful year.

A Caring Community of Learners

At McGaheysville Elementary, we focus on creating life-long learners who are caring and respectful.

As early as 1830 a two-story log dwelling was used to educate the children of the McGaheysville area. The building was replaced in 1850 by a one-room structure which was torn down in 1870.

During that year, McGaheysville Male & Female Academy was constructed and located at a site on Town Hall Road (Va. 843) across from “Town Hall.”

In 1908, McGaheysville High School was built on the present site combining the elementary and high school. The new school incorporated the small one-room schools from the surrounding countryside.

Forty-one years of expansion and growth brought an end to the usefulness of the combined elementary and high school. In 1950, Montevideo High School was built incorporating the high schools of the following communities: Grottoes, Keezletown, McGaheysville, and Port Republic. In June 1950, the last senior class of McGaheysville High School graduated.


For slightly more than a year, pupils attended school in the United Church of Christ and the Methodist Church. Nielsen Construction Company of Harrisonburg was awarded a $481,153.00 contract to build a new fourteen-room elementary school in McGaheysville. The new building housed classrooms, cafeteria, kitchen, teacher’s lounge, and a health clinic.

On January 26, 1969, the new school building was opened for use. It housed grades one through six until the 1976-77 school term when kindergarten was added. The addition of kindergarten added two mobile units to the school. In the spring of 1980, the sixth grade was transferred to Montevideo Intermediate School due to the opening of Spotswood High School.

McGaheysville Elementary School presently contains grades pre-kindergarten through five. An addition and renovation was completed in July 1995 at a cost of approximately four million dollars. 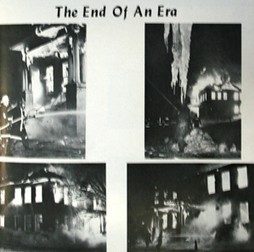 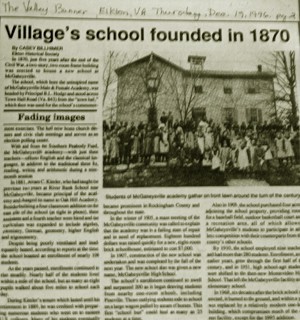 Driving directions: From I-81 take Exit 247A onto US 33 East. Proceed approximately 10 miles. McGaheysville Elementary is on the right approximately one mile beyond the light at Spotswood High School

MES would like to thank the following business partners for their contributions to MES this year!

Back to MES Home
Embed code is for website/blog and not email. To embed your newsletter in a Mass Notification System, click HERE to see how or reach out to support@smore.com
close
Powered by Smore
Powered by Smore