Buchenwald was a German Nazi concentration camp used in World War II, it was used to hold prisoners (Jews.) The camp was located near Weimar, Germany. The name "Buchenwald" was given to the camp by Heinrich Himmler on July 28, 1937. The camp was established on July 16,1937 when the first group of prisoners were brought to the site. The Concentration Camp was used bewteen the years 1937-1945. By the end of July 1938 there was at least 7,723 prisoners at the Buchenwald camp. In September 1938, 2,200 prisoners from Austria were brought to the camp, all of them were Jews. Buchenwald held prisoners, the guards from Buchenwald were to punish the prisoners and make them work hard for freedom.

The boys of Buchenwald.

These are the ovens that the Jews were burnt in.

This is the main gate to Buchenwald. This is where the Jews first ever entered.

Here is a picture of three gentlemen that were in held in Buchenwald.

This is a picture of a couple Jews digging a large hole. They didn't know that after digging for so long they would have to stand at the edge of it & be shot. 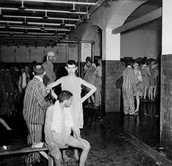 This picture is of the Jews thinking they were going to take a shower and when they got in all doors locked and gas sprayed out of the shower heads. After that, they were thrown into an oven and burnt.