By blindly following something you don't agree with you are essentially giving up your own power to something that isn't what you might want it to be in the end, it can ruin relationships, break up family's, and even destroy countries!

• Think about the situation

• Try and weigh your options (what is best for me?)

• if possible, research has issues similar to yours in the past

• And finally, think about the possible consequences

Now that you have the tools to help you not follow blindly, you will be more prepared for a civil war leading to a communist takeover! 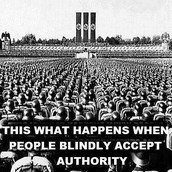 In Animal Farm the same thing happens, one person gains power due to others following them with no true purpose or reason for doing so. Napoleon really doesn't have to do very much to gain power, all of the other animals follow suit and think that his way is the only way when in fact he will be the one to ruin the farm.

We also see this in our everyday life, Donald Trump is a prime example. Donald Trump has risen to power by gaining followers the same way Napoleon does in animal farm, people following blindly and without true standards for themselves and beliefs in their own life.

I think this can be easily solved, stand up for what you believe in and don't let what everyone else around you is doing affect your way of thought. By doing this we can ensure a better way of life for not only ourselves, but everyone around us as well.